the main / All Plumbing / plumbing / Siphon Basin: rules for the selection and installation
Content:

Siphon is an integral part of these plumbing fixtures like sinks and bath. It provides the water flow into the sewer pipe, at the same time prevents the penetration of odor of sewage in the apartment. The force of habit, modern man becomes interested in a device of such devices only, when there is a question of repair. Properly selected and installed drain will properly perform its functions and serve for many years.

To prevent the room odors from the sewer pipes used water seal device, the so-called siphons. Siphon device is divided into two types of constructive solutions: in the form of curved like the letter S, tubes and bottles as. They are called, respectively, or a glass bottle, and dvuhoborotny or elbow. All other species, it's just a design decision of the two structures.

Bottle trap advantage is the ease of cleaning. It suffices to unscrew the cap the bottom of the siphon. Earlier in the apartments were installed steel or cast iron traps. Apparatus siphon supplemented at the top of the knee revision (opening with a lid), similar to, that was placed in the sewers. Through this audit and purge from clogging.

For example, consider a siphon device for a bath. Siphon for bath consists of two tubes: drain and overflow. Before hydrogate they are connected in one pipe, and have one tube water goes down the drain. In qualitative, good siphon tube, It is easily adjusted in length and any suitable drain port matter, it is located. There are also traps with automatic drain. 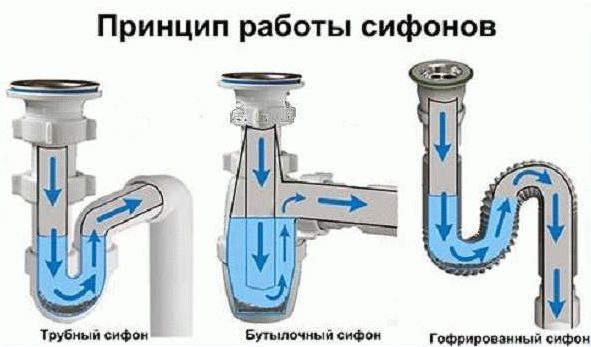 There are also special designs siphon for shower. Here is one of such structures. The drain hole is inserted into the tube height a little less of the height of the pallet. In the upper part of the tube has a hole for draining water.

Thanks to this improvement pallet, during showering, It is filled with warm water and, naturally, feet are not cold until you take a shower.

Yet there is a special ladder, mounted directly on the floor. The slotted groove placed sewer pipe and gangway, top all covered with tiles.

As I mentioned above, Traps for sinks differ by crank, bottle and corrugated. Last, to obtain the water trap effect, to bend in the shape of the letter U. This bending is fixed a plastic tape. The free end is movable and can be bent in any direction. The disadvantages include the fact of the siphon, that the folds of the corrugated pipe, Unfortunately, quickly clogged with grease and dirt.

The second of these examples - it is all familiar tough, plastic construction, which is shaped like a bottle. This siphon is practically in every apartment. He can be quiet for the safety of a slipped from his hands when washing rings - on the bottom of the trap, they will run away from you, unlike corrugated siphon - it does not delayed. therefore, as an alternative, you can buy a combined variant - bottle trap with a corrugated pipe. We cranked siphon any characteristics of virtually no: it is a curved pipe. All these traps for sinks occupy so scarce space under it in, the already small, with you our bathrooms. To save space, you can purchase a trap that is placed in a special box. For this box is done in the wall a small niche. In consequence of that on the drain will only go a small tube.

The design of drainage basin 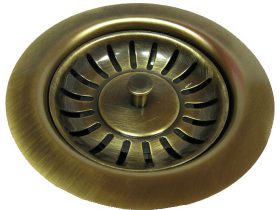 Self draining device shell It looks like a curved tube, which included a siphon and proper, drain pipe itself. When the faucet is turned on and descends in the water sink, it first enters the siphon, further passes through the curved pipe, and then included in the total water runoff. To protect the trap from clogging, special protective metal mesh was invented, which are installed in the sink drain and prevent from falling debris and fine hair.

Due to its bending trap performs basic tasks: the water goes, not all at once, a little delayed, forming a gate, and which does not penetrate the unpleasant smell from the drains in the room.

Draining usually completed housing, exhaust pipe, cuffs, plate on the hole, rubber stopper, as well as nuts and fasteners. Experts recommend purchase with overflow drain. corrugated pipe added In such a construction, which connects to a siphon a little higher. Such draining is less susceptible to clogging. 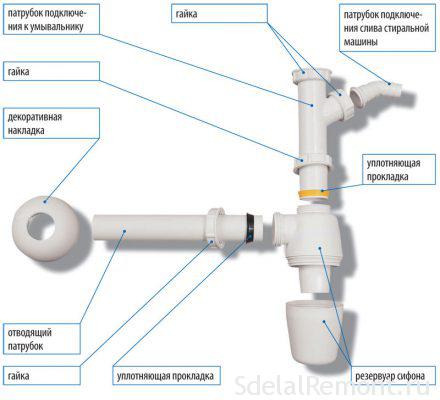 depending, on, to which the device is connected to the drain, they can be divided into siphons for sinks, for shower and siphons bathroom. The first option, in turn, further divided into several types, different structure. Siphon for the shower is installed in the bottom thereof or on the floor. Draining bathroom equipped with overflow, to avoid flooding.

Traps for sinks are distinguished by their design and can be: 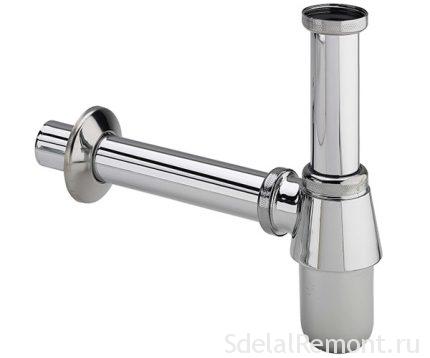 A disadvantage of this type siphon is not very deep water seal, which in the future may provide evaporative unpleasant smells. This can happen, when the sink for a long time do not use: water accumulates, stagnates and forms perspiration. Also disadvantage can be regarded as a complicated installation, and the inability to use the kitchen. Therefore, these traps today lost its popularity, replaced by the following form sinks.

Outs siphon with corrugations may be mentioned the difficulty, arising in the clearing of debris. Due to the presence of fine folds, in the tube will settle much fat and dirt. For scrubbing tubes, have it completely removed, or use chemical means. 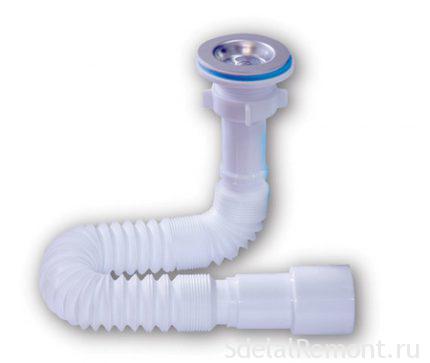 If it becomes necessary to mount several drains to one siphon, then it sets up a special adapter. This transition element enters the main water flow, and on the side of the emergency drain flows, for example connected to the washing machine. 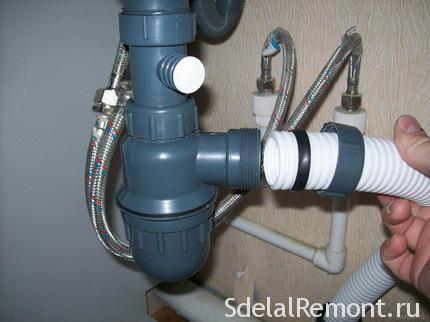 The advantages of this type include siphons cleanability. To do this, just need to unscrew the bottom of the flask and clean it. Another plus: if the sink was accidentally dropped a small thing, it will not go directly into the sewer pipe, and linger in the sump, and later it will be possible to extract therefrom. Bottle trap has the ability to connect to other sanitary devices: dishwasher, washing machine, as well as some models are equipped with additional functions.

Minus the drain bottle is more complicated installation, than is the case with corrugated siphon, as well as cleaning properties without having to replace the device itself.

This siphon design allows you to mount the device in country houses, where the owners leave for a long time and the room is unheated. In the absence of water seal, when cold water is not frozen, and would not entail deformation drain pipe.

A plus also a lack of curved elements, occupying some space, dry siphon has a straight shape and fit, even under the most miniature sink. Installation of such discharge may be either vertical, and horizontal. 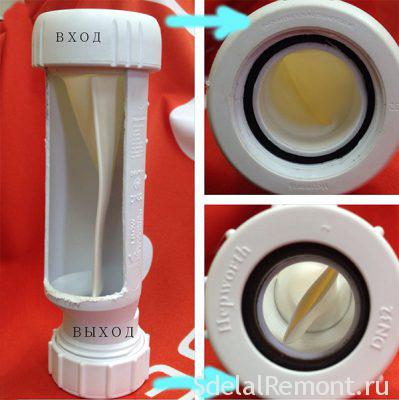 Also differ in material traps, from which they are made:

Modern manufacturers make plastic siphons, coated with a antibacterial substance inside, which prevents settling of dirt on the pipe.

Plastic products are lightweight, they are resistant to chemical agents, They have a simple construction and easy to install.

What to look for when choosing a siphon?

Choose a siphon for sinks must be based on the following factors: 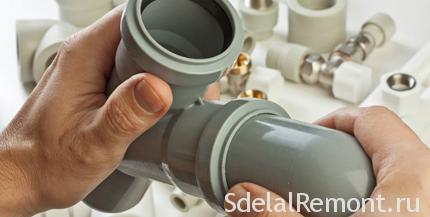 The procedure for self-assembly bottle trap

Due to the great popularity of the siphon bottle type, should consider its installation. Assembly and installation of the siphon does not imply the emergence of problems, so with this task can handle and newcomer. More often, It comes with assembly instructions, to be followed.

When: leakage, injury, marriage, It allowed the use of silicone sealant.

The basic installation steps include:

The first step is to connect the siphon sink with drainer. To do this, secure the safety net for the sink outside, on the discharge pipe and install the rubber gasket firmly press it to the drain from inside the shell. The pipe nut screw coupling screw with a screwdriver. note, that the protective grille must be recessed into the sink bowl and do not speak of it. This will help avoid the accumulation of water in the sink.

The second step involves raising the main part of the siphon. At the end of the vent pipe is worn plastic nut and conical seal, whereupon it is inserted in the flask and the nut is twisted. Further twists the upper part of the flask, while it is connected by means of rubber gaskets.

At the last stage, a siphon connected to a sewer pipe. This is done using corrugated pipe or a rigid assembly. Important, inlet diameter to fit the connected sewer line pipe, otherwise you'll have to use a rubber sleeve for sealing.

After that, as a trap set, check the build quality. To do this, turn on the water to a total head and put it under the sink paper, were visible drops.