the main / All the repair / Walls / Plaster and putty / Technology plaster walls of aerated concrete
Content:

Performing plaster walls of aerated concrete in residential building - one of the best options to preserve heat-saving properties of building envelopes.

The use of concrete blocks as a building material - almost ideal for low-rise housing. Constructed of these homes possess such advantages as low weight (but, so, It does not require the construction of very strong foundations), low thermal conductivity, and an affordable price. At the same time increasing the blocks moisture leads to a deterioration in its heat-characteristics, and weighting structures. To protect the walls necessarily needed plaster walls of aerated concrete - sometimes foreign, but most of the interior.

Performing internal plaster aerated concrete, It should take into account the characteristics of this material and opposed to more traditional brick, concrete and stone. Firstly, it concerns honeycomb structure blocks, which were originally considered heater, and only then began to be used for the construction of the walls themselves. Due to the open structure, which is the result of the addition in its structure a special foaming agent (aluminum powder), aerated concrete has a high level of water vapor permeability. This characteristic is one of the key when choosing the material and the method finishes.

Regardless of the choice, than plastering aerated, start finishing work should be inside, and only then deal with the building facade. Changing prioritization and performing first outer, and only then interior decoration, results in too high humidity. emergent (special, during a hard frost) the steam is condensed in the walls on the border of aerated concrete and finishing. Created with the moisture can lead to cracks in the plaster and pieces falling off it. That is why the interior finishing work is carried out in the first place. 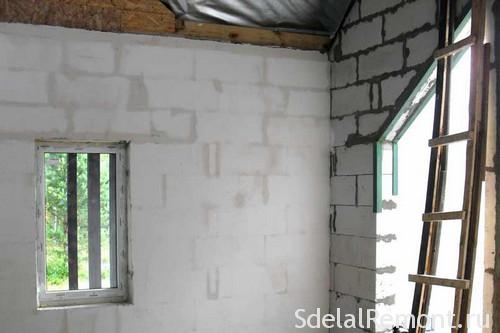 The choice of method and materials

When the finishing plaster walls of aerated concrete indoors in one of two basic ways. The meaning of the first is not only in preserving, but even improving steam permeability blocks. Second, conversely, It assumes full vapor barrier. The benefits of maintaining water vapor permeability are to create an optimum microclimate, a variant with insulating walls - a conservation external finishing, which does not affect the steam coming out of the building.

For aerated plaster inside is not recommended to use grout. The first reason - the smooth blocks do not allow the material to stay. The layer of cement quickly disappears, and the finish has to perform again. Secondly, optimal one for plaster blocks is the material with the same or higher vapor permeability index compared with gas concretes. We cement this characteristic is much lower, that does not allow to maintain normal conditions inside the building. For the same reason, the answer to the question, whether it is possible to plaster aerated polystyrene or foam, is negative.

Besides, cement-sand mortar has a high humidity due to its preparation required a significant amount of water. aerated concrete structures, having a high rate of water absorption, absorb the liquid from the fabric. The quality of the solution, to set the strength of which require uniform drying, decreases, as well as his ability to stay on the walls. As a result on plaster cracks, and its quality falls, bringing the next repair.

Do not select for finishing aerated inside a special adhesive blend. Despite, it is designed taking into account the particular material, Adhesive is desirable to apply a thin layer, not suitable for protection against cracks. As soon as the water vapor transmission rate unit violated, thin layer on the surface of aerated concrete for plaster of glue mixture will immediately;

By choosing option walls of aerated concrete indoors preserving the natural vapor permeability of the material, use plasters and gypsum plaster putty. Thanks to their composition being in hydrated lime and perlite through the plaster layer easily penetrates steam. Another advantage of this version - no need to prime the surface of the walling.

Slightly less frequently used as inner walls of aerated plaster mixture such, in which structure a high content of natural materials with a high degree of vapor permeability:

Their performance vapor permeability higher than not only from the inside, but even with stucco, and the dried solution was easily erased, getting the perfect whiteness. The resulting coating has excellent durability and enables further finishing.

should know: Because of the porous concrete structures it is recommended putty only after priming. If you do not, on the plaster will crack.

Finishing with a vapor barrier

When choosing a finish aerated concrete indoors with the removal of water vapor permeability, ie fully insulated walling, one of the materials is a polyethylene film. The easiest and fastest method of fixing it on the walls - laying under one of the finishing layers. However, the speed and ease of installation are irrelevant, if decorated in this manner constructs condensation, and stucco swells. More suitable one in order, than plastering aerated concrete inside the house, will be sand-cement mix, which included no additives in the form of dolomite or lime. With it, the water vapor permeability is reduced by several times, but it increases the possibility of peeling plaster after a while.

Further reduce the vapor barrier, not too affected the quality of finishing, help:

To perform finishing aerated concrete plaster own hands requires the use of the same tools, which are necessary for normal plastering. To prepare the mixture of plaster solution requires special tank - such as a plastic tub or made from the same material as the bucket. Their size should be sufficient to place inside all the ingredients for plaster.

To the dry mixture, which is poured into the tank, add water. The mixture was stirred until the desired state with a nozzle or a drill mixer construction. To determine the proportion of material and fluid, usually, It can be the inscriptions on containers with construction materials. 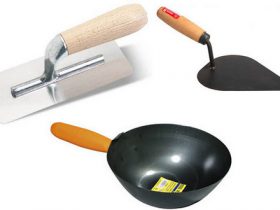 instruments such as th:

Surface overwritten grater. And excess solution can be removed from the wall poluterom. Equalize wall requires using beacons, and pull off plaster - rule. Another tool, without which it can not do when working - rail length from floor to the ceiling. With it checked by defects on the walls - are considered allowable deviation of no more than 6-7 mm.

The process of plastering

solving the problem, how to plaster the walls of aerated concrete, go directly to the performance of work. they begin, Like all methods of surface finish, a training base. Blocks purified from the mixture of residue and sealed seams therebetween. Before, as a plaster aerated indoor surface is applied on a porous layer primer.

Solutions for concrete blocks, involving the preservation of water vapor permeability, also
capable of passing steam, differing not only high water-repelling properties, but also an opportunity to strengthen the building envelope. The primer is not required to apply a single layer, and several. At the same time we must take into account, that the new application is carried out only over completely dried-up old.

Further, the walls of aerated plaster technology includes such steps as the:

When applying the primer solution on top of the blister aerated plaster layer thickness required to withstand at 4-5 mm. Recommended addition of primer slag sand. When applying a finishing plaster layer desirably employed construction material, in which structure there are sand fines, enhancing smoothness blocks.

At the penultimate stage plastering plaster surface layer made almost perfectly flat by smoothing already dried solution. Approximate time, through which can be smooth plaster - 24 o'clock. In order to obtain more flat surface blocks are wetted with water.

The last stage - painting using special paint. For that selected materials, having a high degree of vapor permeability. After staining over the ink layer applied is desirable hydrophobing, several times increases the strength and durability of the finishing layer.

The operational life of the resulting interior decoration depends on several factors. for example, on the quality of finishing materials, which can be defined already at cost (good plaster will not be cheap). Although no less importance and characteristics of aerated concrete - even an expensive plaster will not be well enough to stay on the low-quality surface.