the main / All Plumbing / Bath, shower / Suspended ceiling in the bathroom: advantages and disadvantages
Content:

How the suspended ceiling, his views

tension ceiling It represents a design, mounted on a special metal or plastic frame, which is mounted on the perimeter of the room along the walls near the ceiling. Stretch ceiling can have a variety of designs, shape or multiple levels.

For the first time the ceilings began to use in the middle of the last century. Then they were intended to, arts to hide all the protruding bumps, and hide communication. After a certain amount of time, manufacturers have paid attention to the quality of suspended ceilings and perfected it. Also, in the modern world it offers a great number of colors for the ceiling, as a plain, with patterns, and integral webs pattern.

All the ceilings respectively manufacture of materials can be divided into two groups:

The main feature in the assembly of the ceiling type is no need to apply heat gun. In this connection, the installation of fabric ceilings can be done by yourself.

However, this option is not suitable for use in bathroom. If suddenly there will be a water leak from the neighbors above, the ceiling is covered with spots, and it is spoiled. He also will continue to absorb the condensate, formed at high temperature. Therefore, the fabric suspended ceiling is not advisable for use in the bathroom.

Any suspended ceiling made to order. Gager defined length and width parameters of the future ceiling material and prepared for. 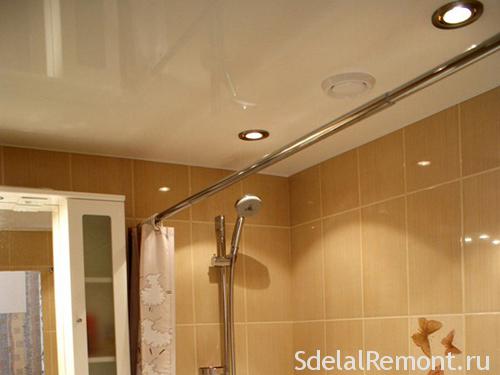 There are obvious advantages suspended ceilings over other types of finishing materials, used for the ceiling in the bathroom: 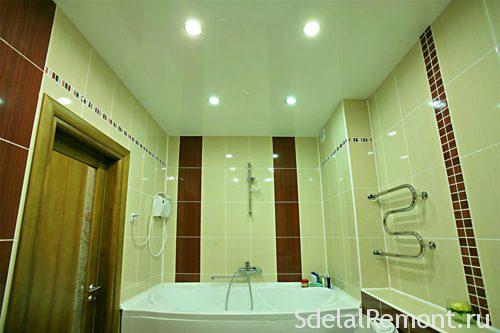 Among the many advantages of the, ceilings are not without drawbacks. their little, but still present:

Plus all the same more than minuses, but, If these shortcomings are unacceptable to the ceiling in the bathroom, give preference to other finishing materials.

As mentioned, suspended ceiling does not require complex care, which depends on, what type of surface was used: matt or glossy. 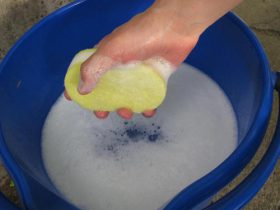 Tips for choosing a design

For a harmonious combination with the design of the ceiling bathroom, select its texture and color.

Besides, you can make an original suspended ceiling, simulating the night sky. Such a move would allow to relax after a day.

2 Comments to the post "Suspended ceiling in the bathroom: advantages and disadvantages”