the main / All Plumbing / Toilet / What to do, when the water in the toilet rises high after flushing
Content:

Your toilet can surprise you in many ways, but the worst thing is the rising water level after flushing. If you notice, that the water in the toilet rises too high when flushed, you have to react quickly, to avoid overflow.

The most important task is to determine the cause, where the water level rises so much. This may be a partial clogging of the toilet., faulty system or debris in the air vent , Asor. Every problem requires a different approach, so keep reading, to learn, how to prevent overflow of water in the toilet.

Factor a, which can raise the water level

The main thing for you now is to conclude, which in the first place led to an increase in the water level. Three factors can lead to this., so let's see, how to recognize each of them.

Partial clogging of the siphon or toilet pipes is the most common source of the problem.. Well then, that you are not dealing with a completely clogged toilet - you can say that, because it can still wash away, not overflowing.

But danger still lurks, and you need to clean the toilet, to prevent further blockages. Partial clogging occurs, when you wash off objects, which are not suitable for the toilet. These include Q-tips , hygiene products, baby wipes , toys, hair etc. d.

About 70% cases associated with fatty and soapy deposits on the walls of the sewer, accumulated by the dishwasher, manual dishwashing, hygiene procedures, as well as hair accumulation in the drain.

Fat is heterogeneous in structure, looks like jelly. Closer to the walls, it is solid, from the outside - soft. The hardening of fatty deposits occurs when hair gets into them, threads from clothes, etc.. They are actively impregnated with mineral salts from wastewater, gradually thickening. Ultimately waste builds up, preventing water from draining down the drain quickly and effortlessly. When flushing a partially clogged toilet, the water level rises instantly, and then gradually decreases. Clogging of the toilet can be caused by a layer or rubber part., which is located above the toilet outlet. improper installation of drain pipes, while the sealing gum partially enters the pipe and begins to gradually accumulate debris.

Fat plugs are difficult to remove. They are characterized by increased stability due to regular drying and an increase in the strength of the structure under the influence of a draft in the system..

Usually, the main causes of blockages are:

More often, objects in the toilet get stuck in the water seal, having a flow area less, than sewer pipes. Besides, the movement of drains in it is impeded due to the characteristic S-shaped shape, creating additional hydraulic resistance.

Blockages can also occur in characteristic places where the flow velocity changes - at the bends of the outlet pipe, as well as in the place of its connection to the riser.

In more rare cases, the blockage may appear not in the toilet itself or not far from the place where its outlet is connected., but in the riser, which drains wastewater from all floors. If there is a traffic jam below your apartment, the, the riser will gradually fill with sewage, until their level reaches your floor. After that, drains from the upper floors through the sewer pipes will begin to flow into the apartment - fetid slurry will begin to appear from the drain holes in the bathroom and toilet.

Most homeowners are unaware of the small roof vent. This is a ventilation tube, which helps the system restore atmospheric pressure after flushing, what is vital to your toilet.

If the vent is blocked, drains will lose their flush potential and cause water to rise into the toilet. What can block the air vent? It's on the roof, where it collects falling leaves and other debris. It builds up over time and clogs the vent.

What to do, if the water rises too high during flushing? 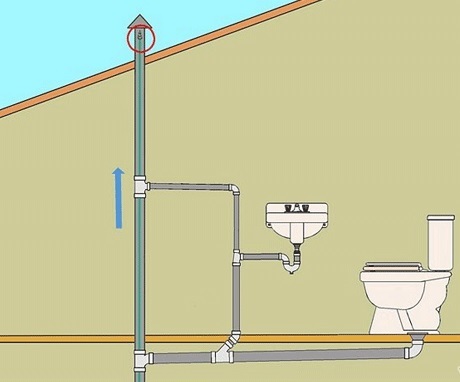 Now you understand the secret of increasing the water level in the toilet., but it's more important to solve the problem. Here is a solution for each of the three reasons.

Clogged ventilation hole, so get ready to climb the roof. Do it very carefully., because you will be working at a dangerous height, secure yourself with enough ropes and a standing platform.

This task requires an assistant, because you will be using a garden hose . Reaching the roof, take the hose and push it through the vent. Water should clean the ventilation pipe, but there may also be a reverse flow due to garbage.

If this happens, you can use a toilet auger, to drill the ventilation pipe and remove solid waste. Then turn on the garden hose again., to clear the air vent without obstruction.

It won't flow back through the vent this time., because there is no blockage. When you do, go back to the bathroom and flush the toilet several times - you, probably, will not see again, how the water in the toilet rises after flushing.

Break up the blockage with a toilet auger

If the piston does not give the expected results, you can use a stronger tool. Toilet drill is a sharp metal wire , which goes deep water - sewer system. Its spiral line connects with a long handle, so you can operate and push the auger.

Take a toilet snake and twist the metal spiral counterclockwise. Hold the handle firmly and keep turning it, to get to the lock. When the drill corkscrew touches the blockage, he stops for a moment. 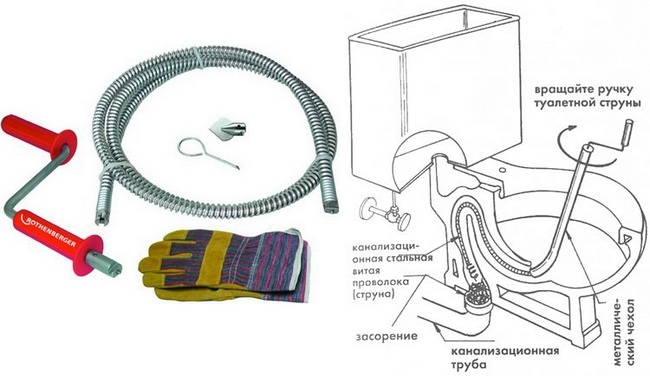 It means, that you should give him an extra boost, to overcome the obstacle. The best thing about augers is that, that they collect a lot of trash at the exit, therefore the pipes become cleaner after cleaning.

You can repeat the whole process if necessary., To make sure, that the drains are not clogged. However, be careful when drilling, because the auger is sharp - it can scratch the drain, make cracks or even drill a hole in plastic pipes.

Clean the toilet with mechanical devices

The first tip is to use a special tool and clean the toilet. Do not wait, until the toilet cleans itself - it's too difficult, it is better clean the blockage yourself. Luckily, there are several tools, which can be used to remove blockages.

Pump it up with the toilet plunger
Time to get the toilet plunger out from under the sink—or there, where did you keep it. Place the piston cup over the drain hole, making, that the tool covers the porcelain very tightly.

After that start pumping up and down, pushing and pulling the piston with your hands. Remember to wear rubber gloves, since they will not hurt your hands when immersed. The plunger forms a vacuum seal, which makes the blockage come out.

Keep pressing, until you push it all out, what causes toilet clogging. When the blockage dissolves, you will hear gurgling sounds from the pipes. This is a sign that, that you can remove the plunger and let the water drain out of the bowl.

Punching with a suction cup

If the cause of the blockage has not been identified, and liquid, albeit slowly, but seeps down the drain, use the proven method - cleaning with a plunger.

The plunger is a common handy item, regularly used at home. The process of cleaning sewer facilities follows a step-by-step scheme.

It is quite easy to work with this tool.: 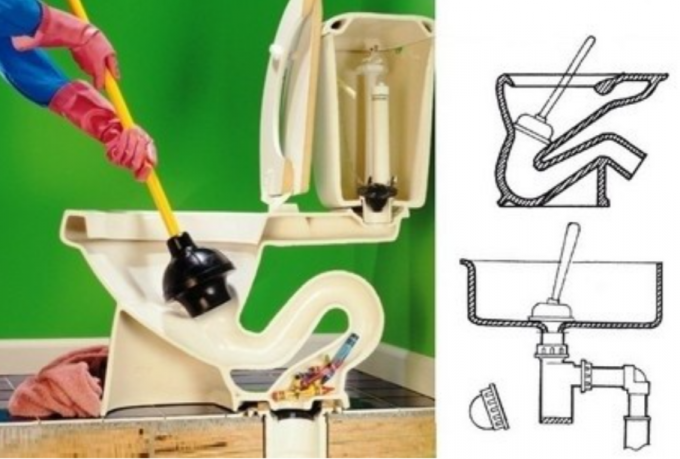 Water hammer contributes to pushing waste accumulated in the pipe into the sewer, arising when pumping with a plunger. The efficiency of work directly depends on the speed and force of pressing.. If the water does not drain after removing the instrument, manipulations worth repeating. After cleaning, press the flush water button and make sure the system is working. There are several models of plungers on sale: Simple bowl is the cheapest, effective for tackling small blockages and cleaning pipes in sinks, but not toilets.

But if the plunger turned out to be useless, you will have to use a different method of cleaning with a cable.

How to clean pipes chemically. Chemical methods of pipe cleaning are more modern and less unpleasant.. Direct contact with dirt is no longer required.. Since the main cause of blockage is fatty deposits, on which everything else sticks, then the main task is, to dissolve and wash away the fat. Household chemicals do this task well..

Alkaline products are most effective in combating body fat. A fatty film forms on the pipe surface, all rubbish starts to stick to it. Cork grows. And alkaline agents dissolve this film, thus cleaning the pipe. Alkali dissolves soap deposits, hair, which often clog bathroom drains. These products are recommended for cleaning plastic pipes..

The powerful composition is poured into the drain hole of the sink on 15 – 20 minutes, then everything is washed with a strong stream of hot water. For very severe blockages, the exposure time should be increased., and if necessary, repeat the procedure again. Flushing after holding the solution can be supplemented with a plunger.

The tool is recommended not only for dissolving corks, but also monthly for preventive pipe flushing.

Acidic chemicals work better against organic deposits. so, it is more effective to use them for cleaning the drain after the kitchen. The technology of use is the same, as with alkaline agents. But a longer exposure is recommended., several hours.

Home chemicals allow you to carry out procedures with maximum speed and comfort. There are many chemicals on the market to deal with deposits and small debris. Specialized chemical formulations are manufactured in the form:

To inexpensive and affordable domestic drugs, eliminating unpleasant odors, removes the remains of fat and food, splitting hair, wool and thread, carry the Mole. It is manufactured by several independent factories and differs:

What not to do if your toilet is clogged?

It is not recommended if there is a blockage in the toilet:

Turning to professionals, you save time and effort, and in some cases material resources. High-quality hydrodynamic flushing completely restores the throughput of the entire pipeline, therefore, the recurrence of traffic jams is excluded.

If you are dealing with high toilet water levels, first you need to find out the cause of the problem. It could be one of the following reasons - clogged toilet, broken cistern fittings or blockage in the ventilation hole.

This is a pretty simple project , made by hand , so for such a homeowner, how are you, it won't be difficult!

How to fix high water levels in the toilet?
You can use a plunger or toilet auger, to decompose the blockage in the pipes. You may need to go up to the roof and clean out the vent.