the main / Top review / Induction hob: rules for the selection and ranking of the best top 5 models
Content:

If a choice of electric or gas stove for the house all clear, that new technologies such as the induction cooktops can enter with little confusing. You can not argue, it is essentially an innovative solution, usability induction cookers do not differ radically from Hi-light panels with glass coated.

The question naturally arises, what is the advantage of "induktsionki", how to select the optimal model and whether there are shortcomings. To answer these and other questions will help review cookers electric panels, which are included in the ranking of the best.

The key difference between the induction hob of glass ceramic from similar - in the heating element and heat transfer principle, than they are gaining popularity. In panel mounted magnetic coils, in contact with the dishes, containing ferromagnetic components, heats. 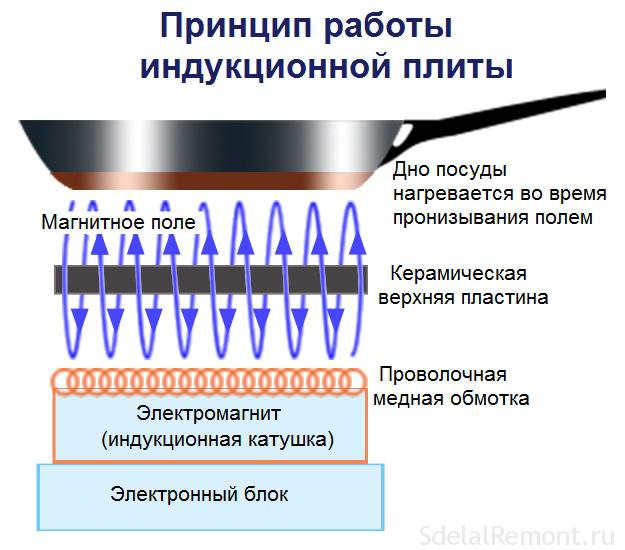 It is worth noting two important factors, deducing this type of panels in the best sellers.

Controls may be different, as mechanical switches, and touch-sensitive buttons, but the second type occurs most often. Number of burners is different: from one to seven.

The design is fully consistent manufacturability and cost of home appliances, usually, there are black or silver model markup burners.

Advantages induction cooktops due to a special method of heating and heat transmission.

so, what are the advantages: 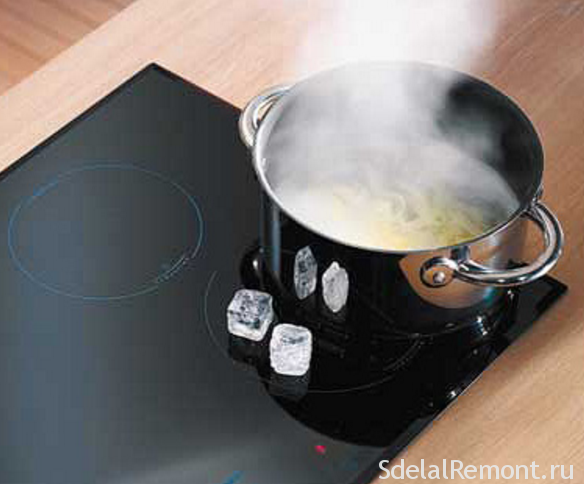 Disadvantages of induction hobs rather subjective, but they need to know to choose a good model:

What is different from the ceramic glass surface induction

Despite the popularity of this issue, I put it correctly. Glass ceramics - is the type of cooking surface, and the type of heating element may be different: induction or electric (rapidny, Halogen or Hi-light). Below are differences cooktops induction type is different from the glass-ceramic surfaces with electrical heating elements.

You can note, that is fundamentally different only the heating element and the method of heat transfer, when the heating is not on the surface of the hotplate, and it is directed exclusively to the utensils for cooking. In practice, this translates into saving electricity and the relatively cold surface of the plate.

Usual heater elements transfer heat to the burner itself, which then heats the dishes. The faster the warming, the more the device consumes electricity. Induction hobs economical, and this attracted the attention of. The same hi-light electric panel rather quickly heated, due to the high consumption of energy resources, in addition, they have long cooled, Induction is instantly react to changes in temperature.

Familiar heating elements are not as secure and harder to care for them. Outwardly, and the first, and the second device is hardly different from each other: stylish design, universal colors, different forms.

Devices with induction heating technology in a wide range of modifications. Rating induction hobs contains models, Various according to the type and functionality.

First of all, There are combo panel, where the combined two different heater, eg 2 induction zones and 2 Tenova. The combination of the advantages of two different plates would be a practical solution for many users.

Secondly, range includes all types of: portable, embedded or stand-alone (complete with oven). Recessed can be dependent (needs oven) or independent (can be set independently).

Fully induction plates differ from each other in several points:

The most important points - is the functional and size, because the limited capacity complicate the cooking process, as well as extra or missing burners. Most induction hobs, This low-cost model, that combine optimal set of options.

Selection of a suitable device should be based on individual user requirements. Reviews so far for this technique is not much, but it is also a kind of indicator, because the negative aspects are bound to be shown. Market Act, The cheaper model, the less it various options, that can affect the usability.

To know, how to choose the induction hob, attention should focus on the key factors.

Number and size of the heating zones. Plate dimensions are directly dependent on, how many burners placed on it. Embedded panel comprise from two to six, portable - one or two, Detached may have seven heating zones. Here it is worth noting, that the burners themselves can be round or oval, single-circuit or two-circuit, if a user often uses a non-standard utensils for cooking, it is worth paying attention.

There is such a thing as "an increase in the heating zone", when two cooking zones can be combined into one, for example, install a large iron cauldron. The option is called FlexInduction or XpandZone, and in addition to the expansion of the hotplate can independently determine the size of the dishes.

Interesting fact! Reviews often contain such a fact, that the panel, wherein the burners are arranged close to the edge, not comfortable. Utensils can cling to the metal frame, heating control unit.

Functional. Not every hob has the ability to set certain temperature settings for each heating zone, There are also additional options, they are not always included in the basic set: PowerBooster (intense heat, when the power is borrowed from other burners), boiling control, by inclusion in the absence of glassware protection, lock to protect children, Lock the current cycle, heating up.

cooking modes - this is the standard parameters of temperature and time (reminiscent of regimes multivarka), their set may contain 10 to 20 different settings. If it is difficult, you can opt for a model with 15 modes, is the average.

Control Panel. Most often, it is located in front, but there are cooktops, wherein each burner has its own control unit. In favor of some of them to choose - it's up to the user. Some boards have a display.

Rating induction hobs including price segment 25 000 – 40 000 rubles includes several top models, demand for which is due to a logical set of technical parameters. An overview of the rating positions "Top 5" is based on demand, sales and positive reviews.

For complete information about the models provides an overview of induction cooking surfaces, ranking of the best components.

Overview Electrolux cooking surface (Electrolux) EHG 96341 FK . Model hob enters the ranking of the best, It is notable for the fact, It realized that in just two types of heating elements: induction and electric. Accordingly, two burners operate on the same principle, Two differently, one of the heating zones - dual (burner adjustment size depending on the diameter dishes).

Built surface with a beveled edge can be easily mounted into any standard-sized worktop, installation on forces independently carry, but if necessary it can be done and a specialist.

The total capacity of all burners devices - 6,6 kW, each of which operates in two modes of heating (respectively, regulated and electricity consumption). Talking about the design, here it is standard: black ceramic glass, the usual arrangement of the burners with a marking.

induction hob Overview Hansa (Hansa) BHIW68303 remarkable appearance - this white induction panel 4 burners. The nominal power of the device 7,4 kW, which is two times higher, than the similar model BHIW67303. It is worth to mention the low power BHIW67303, which is equal to 3,7 kW, potential energy savings are offset by the, that can not include more than 2 x burners simultaneously, otherwise there is a loss of power. Model 68303, in turn, It allows the use of all 4 burners.

The touch control panel usually located in front of the plate, apart from the usual options, such as a timer, panel unit, residual heat display and trip, present and automatically function to protect the device: simmer (Auto Power plate), detection of presence / tableware size (and similar devices comprise not recommended without utensils). Consequently, choosing the hob from Hansa, the user receives a secure appliance.

If we analyze user reviews, we can note the optimal combination of "price-quality". No complaints about the functionality, induction panel performs all the tasks on the "excellent". conclusion: quite a decent model of a low-cost segment.

Review of cooking induction hob from Neff (Nef) T44T43N0 undoubtedly, It will replace the more popular T55T53X2, but a previous (as stated by the manufacturer name). T44T43N0 power 7,2 kW remarkable heating zone FlexInduction, which can be used as 2 different burners, or as one big (occupies almost half of the panel and adapted to the sizes of dishes).

The functional features such as the solutions TwistPad (an individual timer for each heating zone), Power management function (economical power consumption), turn-off to protect the device (when the slab is poured out the contents of the dishes), Residual heat indicators, panel unit from accidental start.

The general impression more than a positive - it's a great option for the modern people. The hob is equipped with a full set of options, including protective, that will extend the life of the device. Dual cooking zone will allow to cook in a pot large or custom size. With regards appearance, the standard black color is diluted with unusual markings burners, which gives the device a futuristic design, corresponding embedded technologies.

Overview of induction hob IS 655 USC от Gorenje (Combustion) somewhat similar to the above model, but here the manufacturer has gone even further. Increased XXL heating zone (XpandZone technology) will bring together 4 burners in 2 big. Power 7,2 kW, plus optional extended Booster, it is called Power Booster Supreme, its advantage in greater heating rate.

The second interesting point - the presence of "warming up" mode or StayWarm, similarly multivarka, it maintains the temperature 70 ° C. Basic "arsenal" includes a child lock, lock mode predetermined, protection against boiling / boiling and the timer before 99 minutes. Of the minuses - not every model includes a complete set of cables to connect.

Completes the "Top 5" induction cooktop from Bosch (Bosch), model PIC645F17E. The product has been in the "ranking of the best" due to its democratic value, due to the combined surface: 2 induction + 2 ceramic hobs. The model is quite interesting: 17 levels of power, large and small heating zone (one of them with the possibility of increasing), basic features and a bonus - the option of specifying utensils on the hotplate. Noteworthy DirectSelect advanced control panel. Perhaps the best selling induction hob.

Lovers of Spanish production from the German manufacturer would have to provide a device worthy of wiring, otherwise 2 Induction cooking zone will not work at the same time.

A selection of videos on choosing induction cooker