Quite a popular issue in everyday life becomes a plumbing malfunction. The question is how to fix the toilet with his hands becomes the most topical. But in order, to solve it is necessary to know the cause of the problem, their features and how to troubleshoot. The majority of faults are in the toilet tank, and they should be treated with special care.

How does bachek toilet and what it is

Just the work itself of this element is based on the principle of work of the water trap, is he of:

The principle of operation of such a mechanism:

To access the system, remove the cover. It is in some cases just lying on the tank, sometimes fastened thereto, being fixed button. Thus, for the access to the inside, unscrew the flush button and remove the cover. 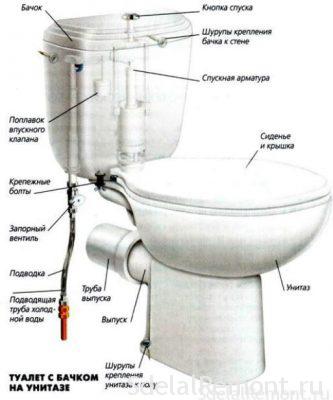 It is worth noting, that the cover is made only in conjunction with the tank, and separately in its sale to find, because remove carefully, not to break.

Own designs are different, and may differ appearance, but it is worth noting, that work the same principle in each.

The most common faults

Now let us consider the most common problems, and then how to solve them. Among the problems is isolated:

In any case, to carry out repairs rather easily, important to know the reason, and how to fix it. Consider the solution of each problem.

If you are in the toilet constantly flowing od, this indicates a leakage in the tank, that for the most part means a displacement or misalignment of the float arm, which becomes the cause of damage. Polononnogo to study the problem enough to examine him.

Repaired damage in the element simply, which uses a sealant, or simply melted plastic. but note, it will be only a temporary issue resolution, which after a short time return.

In cases, when water is supplied continuously cup, or you have to repeatedly press the flush button, to wash away, it testifies to failure of the membrane, respectively, it should be replaced. This is done as follows:: 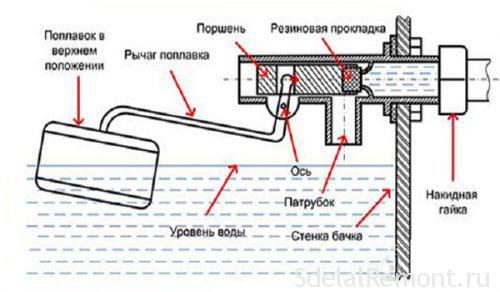 Failure of the flush buttons

Typically, this occurs when thrust breakdown. To resolve this problem, you need to buy a new item and connect it, or just make the most out of a piece of wire, right to it in a way, so that when the button is pressed, she pulled the valve and opens the valve of a tank.

Rather unpleasant problem may be constant noise when dialing water tank. In particular, this problem prevents night. To eliminate it, you can build a homemade silencer, that is done as follows::

Thus, the noise must be eliminated. If this solution does not help, you can try to adjust the flow of water. In some cases, you may need to complete replacement of the drain mechanism.

Almost all problems can be solved by replacing the tank flush mechanism.

You will need the following tools:

Sam replacement process is as follows:

This method is the most reliable in terms of repairing the toilet with their own hands. But many faults sufficient to make replacements, or simply change the pads. Sometimes it is enough to correct skewed off valve or float.

If you just broke a fragment of pottery - you can stick it. It is better to use glue UHU firms, Bison, Tamiya, but suitable and conventional universal glue type "Moment". If the bowl is broken, and the integrity of the water flows - should establish new.

Problems with the cup

We should immediately say, bowls that failure is quite rare. The majority of faults are the result of incorrect fixing the plumbing. To avoid problems with it can help correct installation and timely repairs.

The most common problem is considered to be leaking bowl, causes which can be:

To resolve each problem is sufficient to replace problematic parts, which are located mainly in the tank.

There are lots of varieties of toilet seat, with it, even with different additions, such as heating or self-cleaning. One such feature is the lifter, which is present today in almost all the comfortable covers (but the most cost).

It is a rather complicated mechanism, which is itself slowly and lowers the toilet seat without noise, which is enough to gently pull her.

Of course such a mechanism can also be damaged. Basically, the problem may be in the spring or nuts. Nuts pretty easy to replace, but the selection of the case rather difficult spring, because finding a suitable not an easy task. To do this already will need to address in a specialized center, and if you do not find the right parts, the need to replace the entire cover.

As can be seen, toilet case fairly simple repair, and implement it on their hands not hard. We offer you see clearly how the replacement is carried out of certain parts. Also we recommend that you read the material on installing a toilet bowl, if you suddenly have to replace your.