If necessary, replace only one board, decayed as a result of coating elements gapping and penetration of moisture into the gap, damaged board should be carefully removed and in its place attach the new, carefully watching the steps of masonry.

Professional roofers remedy against such damage by means of a patch cut from the board. The service life of these inserts is very short, and after a short time again it is necessary to carry out repair work on the roof.

Rotten rafters must be replaced completely, removing the old and new fixing bars. It is important to follow, that new bars exactly match the desired size and plugged into slots vrubok located at the ends of rafters.

roof, sagging due to rotting podstropilnyh bars, before the repair work should be leveled with a jack. Possible for the same purpose and use rack with wedges. Then, under the rafters fed struts, connecting them with braces on rafters. The final stage is to replace the damaged bar.

If it is impossible to replace the bar completely podstropilny, can strengthen its wooden plates, which are connected by bolts with damaged board.

In order to timely detect coating defects, periodically need to check the status of components of the attic space of wooden floors. This is accomplished using a conventional ax, rattling butt girders. Clunk, happens after stroke, It indicates the presence of damage to the roof element and the urgent need to fix.

The most common defect attic floor is rotting the ends of beams, enshrined in the walls. To prevent further spread of rot, you need using the pre-treated with an antiseptic solution of the board or bar to strengthen the damaged beam.

The cross section of such a lining must coincide with the cross had come to the unsuitability of the beam, and the length should be equal to twice the length of the element.

Usually pad is made of solid wood or laminated softwood, and cranial bars - from aspen and alder.

The main features of the wooden roof assembly

Dimensions of new cranial bars, which are patterns of sawn timber blanks, should be identical to the size of the old. By their beam is attached with nails, having a length 10 cm and a diameter - 0,4 cm. nail, arranging them strictly in the middle of the bar. In the process, it is important to follow, to nail necessarily entered into the beam.

A variety of roof damage often provoke damage to cabinets and ceiling panels. In most cases, you need to completely repave, to correct such a defect. The sequence of execution of these works is: primarily removed warming layer, panels and boards, then removed decayed beam, clearing them from dust and dirt. At the final stage of examining beams, checking the horizontal supports and the breakdown axes. 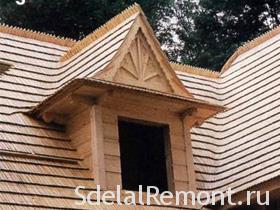 Then the old beams are replaced with new, treating them with an antiseptic solution (bitumen or tar) and wrap the ends with roofing felt or tar paper. In that case, if badly dried out wooden beams, do not plug the slots, fixing them in the right place. To avoid damage to the material after drying is recommended to leave them open.

The frame and wall building joists are attached to the upper wall piping, in the same wooden log cabins - on the outer walls, wherein if the bars cut in between the upper rims.

During the construction of brick houses beams placed, necessary strengthening them on the outside walls at a depth of 19-20 cm intervals from the wall 3 cm. Cement needed to cover the joints. The ends of the beams at the same time should be cut "NAIC", to between a wall and a beam formed airbag, contributes to a better evaporation of moisture from the ends. When the work is primarily secured extreme beams, and then verify their location and give it a rest, necessarily parallel to each other. The spirit level is checked horizontality, and then fastened with nails stacked beams, then put them on the ceiling panels, covering them with a layer of roofing felt or tar paper and finally the insulating material.

When correcting damage to the floor slab should first assemble the frame, and then attach them to the plate with nails and glue. This is followed by the end of the handle bar with an antiseptic solution and put roofing felt or roofing material in the wall at the point of attachment of the future, attaching it with the asphalt mastic. Then, positioning parallel to each other, is attached panel, linking them together with nails, are driven by special inserts, intended to mask the seams. The final step involves mounting a wooden roof panel coating layer of insulation, both new, and old.

As the insulation of the chopped in wooden houses can use coal boiler slag or slag. At their overlap is poured in a layer of 10-15 cm, and on the perimeter - a layer, having a thickness of 30-40 cm and a width 1 m. Coal slag must be dried before use, soaking in air up to complete disappearance of sulfur odor. Boiler rooms wastes must be periodically humidify.

Often wooden roof affects the beetle-grinder. The result of his invasion are numerous small holes in the wooden elements, significantly shorten the life of the roof service. An effective method for controlling beetle - Treatment of structural surface elements antiseptic solution. With the same purpose can be used acetone and nitro.

The complete disrepair wooden roof come because of the appearance of the fungus on the surface. In this case, the best solution would be an antiseptic, made from 950 g of common salt, and 50 g boric acid. Boric acid and salt is mixed, and then fill 5 l of boiling water.

The surface of the wooden parts of the roof covering obtained is rubbed with a solution of at least 4-5 times for the complete destruction of the fungus.