the main / Repair of holiday home / Device and installation of a tiled roof
Content:

Purpose of tile roofing is not only to cover and protect the roof from the negative external influences, but also in the performance of the functions of decorative ornaments, often unrecognizable transforming a small cottage house, and making it look like a fairytale house. Besides, a tiled roof, there are a number of advantages, among which are the long life, fire safety, ease of installation.

Device and installation of a tiled roof

Weight shingles pretty much, so batten construction must weigh more, eg, crates under asbofaneru or asbestos. Sloping roof must be equal to at least 40-45 °.

Crate under the roof, which will subsequently be laid with tiles, made of wide boards or wooden bars, having a cross-section 0,5 x 0,5 or 0,6 x 0,4 cm. Harvested bars or boards are laid out along the line of the cornice, Considering, which then attached the upper row of shingles should easily enter the lower corolla tiles.

The number of components of the horizontal and vertical rows of tiles, must necessarily be equal to an integer.

Attach the boards or bars should be, directing them from the ridge to the eaves. Upon completion of the construction of battens must be put on the edge of the cornice board width 15 cm.

To carry out the work on laying the tile was easier, on the edge of the cornice board is best to attach an equalizing rail.

Further raising the roof tiles and are laid on the bridge length 5 so m, that it was sufficient for the compilation of the series 2-3. Subsequent work roofer performs, sitting on a crate attached to the safety triangular bench.

Ribbon tiles can be laid in two ways: scales and two layers. Regardless of the masonry is carried out first by the main rays, further hipped edges and at least on the ridge.

The ribbon on the basic tile slopes must be laid in parallel rows, reaching in the direction from the eaves to the ridge so, to the bottom row of tiles was blocked tiles top. Every odd number, it should be complete the whole tiles, and even - halves. As a result, the building blocks must be slightly shifted relative to each other.

Position along the eaves and gable tiles, regardless of the angle of inclination of the roof joists are attached to furring. In the remaining ranks are to be attached, only the second and third shingles.

Ribbon tile battens fixed on the uneven bars with nails and clamps, which can drive pairs. The first thing to catch the tile battens of thorns, then the entire series must be installed in such a way clamps, horizontal to their lapel appeared on top of the tiles, and under the left would have been possible to bring the next brick.

Otvorotы, rising above the outside, then cover overlying next. Ends-clamp attached to the side of the attic to the bars crates.

Types of tile roofing and application 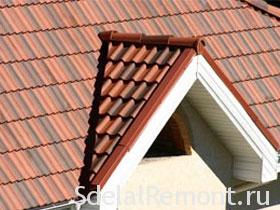 Now there are several types of ribbon tiles.

The most common type of tiles "beaver tail". Put it in one line on a specially prepared solution (the following will describe a method of its preparation). Typically, material consumption - 32 pieces on 1 m2. If the tile is supposed to be laid in two rows, is an expense 45 pieces on 1 m2.

To prepare bonding solution, to mix previously passed through a sand, lime and cement in proportions 5 : 1: 1 and add water. Then, the resulting mixture should be mixed thoroughly, controlling its consistency. Ready solution should not be too bold, insofar as, zatverdevaya, it can greatly shrivel, forming cracks. Strict compliance with the number of normal cement taken. Otherwise it will be too strong solution, provoking considerable loss of material during repair.

In addition to the tiles "beaver tail", They are often used and the tile form "baking" or Dutch. Laid her scales, attaching by means of nails or-clamp to the beam purlin.

Slot tape tile different from the plane by the presence of the longitudinal groove close-, designed for optimum bonding materials.

Grooved tiles used to cover the roofs of simple, one- or bi-directional. It is fixed in one layer in the direction from the gable, along the cornice, to ridge, where rows parallel to each other. laying tile, should do overlap: in length - 0.7-0.8 cm, and the width - is equal to the groove width value. Usually, the first two rows are laid Roofers, standing on the scaffold or the scaffold, follow - sitting on the boards assigned to the triangular batten bench.

Unlike slot pressed tiles from the above two is the presence, in addition to the longitudinal, cross close. In this way, around the perimeter of building blocks bonded to each other sealed seam, preventing ingress of moisture under the roofing.

Extruded shingles are laid in a single layer, observing direction from the eaves to the ridge and making the overlap length and width of the tiles to the length or width of the rabbet.

By its crate is secured with the help of outstretched brick through the eyelet wire. She tile tied to pre-driven into the batten nail bar.

Upon completion, the resulting horizontal joints should be carefully fluff straw cutting, mixed with a solution of lime and sand, cement mortar with addition tow (hemp), clay to prevent wind blowing tiled roof.

The ridge and the ridge edges of the roof trim tiles gouging, specially made for this. In this skate to be tiled in the up-down, and the edges - in the reverse order, that is, from the bottom up.

This is followed by the ridge seal the joints and edges, Using the roof outlet of galvanized steel and cooked shortly before grout. Tiles need to put on the solution and attach the wire to the nail, previously driven into the batten bar. See, the other types of roofing materials and choose a more appropriate.