For quite a long period of slate used as roofing material. And over the years it has not lost its popularity. For the most part this is due to its durability and ease of installation. And then we will look at, as an indoor slate roof independently and give useful tips on laying LTL. 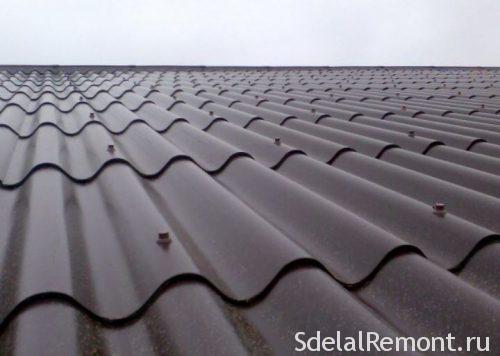 Advantages and disadvantages of the material

Before proceeding directly to the need to understand the technology works, what kind of material, which has properties, advantages and disadvantages.

among the advantages of:

Along with the, roof asbestos cement sheets fit any building, thus it looks quite nice and is long. 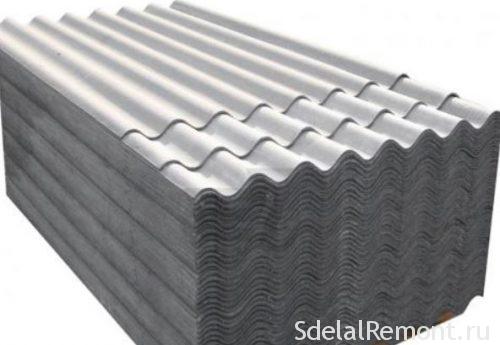 But it is worth considering and disadvantages:

The main types and sizes

In considering this question, it may be noted in all 3 kind of slate, which depend on the number of waves. They can be from 6 to 8, respectively, species are divided into 6, 7-me, and 8-wave.

The material has a constant length, namely 1.75 m. In turn, the width of the waves depends on the amount, and can vary from 830 to 1130 millimeters. Step wave, in turn, can be 150 or 200 millimeters, Accordingly, the amount in individual cases may be different. 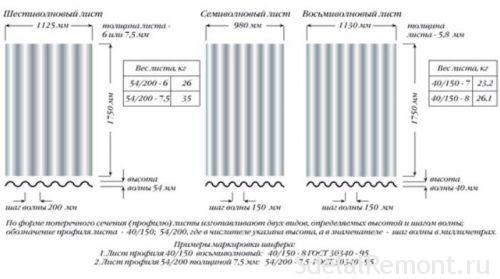 The calculation of the cost of work

Also, before, how to finalize the implementation of the work with their own hands should calculate the cost of materials.

But in the case of, if you decide to give the job in the hands of professionals, it also should be aware of the cost, to calculate the budget and not to be deceived.

The average cost of the specialists is 200-300 rubles. But pay attention, that is the price for laying a meter Slate, I do not consider additional processes.

In the case of the need to fully erect the roof (equip truss system, waterproofing, heat and vapor barrier, as well as myself slate, the cost of such work is approximately 900 rubles per square meter.

The coating is attached to the previously prepared lathing. Accordingly, it is necessary to properly prepare.

Used to create the bars 60*60 mm or truss boards least thickness 6 centimeters. Such rules are due to heavy load on the system.

Besides, It becomes an important factor and step bars. The maximum it must be so, Slate sheets to lay on the 2 boards at the same time, while having in stock 15-20 centimeters. And best of all rafters to provide a step in a third of the width of the slate, which will condition the position of the slate on the three bars at once.

Wherein, lath arrangement also depends on the angle of inclination of the roof. In this way, the less it will, the stronger the crate needed.

Standard inclination level for slate roofs more 22 degrees. But in the case of uni-directional sometimes it provides a smaller angle. In this case, respectively, necessary additional reinforcement rafter system.

Next you can see a schematic representation of arrangement of crates for different inclination angles: 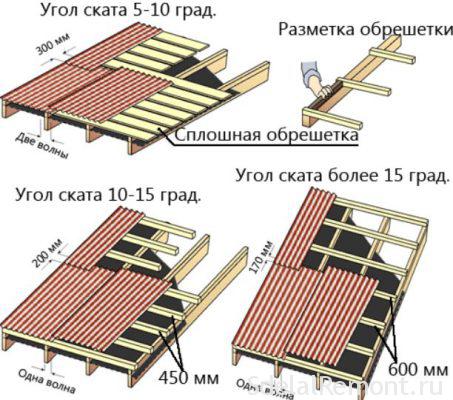 An important tip! Before, how to start laying the roof is necessary to carefully handle antiseptic board, as well as flame retardant.

Calculating the number of slate

If you plan to lay yourself on the slate roof, pre-calculate the number of necessary materials. This is important, just enough to, and in addition do not buy a lot of excess.

If you are even slightly familiar with the fundamentals of geometry, then to calculate the roof is not difficult. In the case of the pent roof is necessary to measure the width, length and angle.

If the dimensions are already known, then things are even easier:

In the case of complex hipped roof a little harder. It is necessary to calculate the area of ​​each ramp, divide them into slate area, add to this figure 15%. Subsequently, the data obtained by calculation each side folded together.

It is very important when buying a slate to pay attention to his integrity. Typically, sheets have to be rewound film or paper and stored horizontally in protected from humidity and the sun location.

Before, how to proceed directly to the laying of slate must perform a number of works, namely:

The work on the arrangement of the roof (considering, that the truss system is ready) need:

Speaking of the fixing sheets Asbestos cement is attached to the base having a length of 70-90 mm with galvanized nails or screws, under the cap which puts a rubber washer, galvanized steel or made of two layers of roofing material napkin.

How to raise the roof slate

Often, those who are going to cover the roof with slate alone think about the fact, how to raise the top sheet.

In fact, it's pretty simple. To do this, use a rope and two hooks.

It is also possible to feed sheets hands, when, when working 3-4 man. 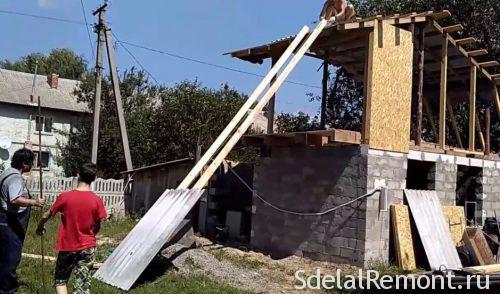 Preparation for installation of slate

Directly before laying the sheets to be processed unpainted water-repellent composition, and paint paint (dispersion or alkyd)

Thus completely eliminates microcracks, that contribute to slip rain on the roof, and their rapid elimination from it.

Besides, slate under the influence of temperature can be deformed, in connection with the holes for the nails should be done in advance, while drilling at 2-3 millimeters longer, than the diameter of the nails. Drilling can also be directly during the laying.

Stacking of slate on the roof with his hands

Roof of asbestos-cement sheets are stacked in two ways: strictly one above the other or vrazbezhku, displacing them aside in each upper row.

The simplest and most reliable is the first method, insofar as, when the sheets are placed one above the other without displacement, one sheet at the edges overlaps four adjacent.

Before starting work, set in advance the drain. Just the very fulfillment of asbestos roofing sheets begin with a series of cornice.

For convenience,, before starting their, along the eaves boards are fixed on the two anti-wind braces on each sheet, to their curved ends of the wave crests are firmly held sheeting. At the end of the first row on it with a pencil or chalk line scheduled to overlap, whereupon a second series is laid.

Let us look at the whole process step by step instructions:

It is not recommended to bend the nails sticking out of the crates, it is best to simply be cut to the required length.

Junction slate to the chimney

When, when the house has a stove with a chimney on the roof, for it is necessary to arrange the bypass. Settling it in several ways, whichever, Is there a waterproofing.

When, when there is a waterproofing, the abutment provides a steel sheet, which is established under the slate and film.

If there is no insulation, the bypass is performed so, to the upper part of the sheet was under slate, and the lower the, over him. An exemplary diagram of the device is shown below.

The final stage of the arrangement of the roof becomes the ridge device. It provides integrity and does not penetrate under the water slate. Also it provides a roof ventilation, and serves as a decorative element.

Usually they make it out of galvanized steel, or from prefabricated elements, painted in the color of slate.

When, when it is made independently of galvanized steel, this is done as follows::

Now that you know the roof of asbestos-cement sheets mount technology. And you can perform all the work yourself. But it's best to stock up on a few assistants. And remember, the roof will last a long time and reliably only when, If all works are carried out properly and carefully. In conclusion, we offer watch a few videos, which clearly shows the stages of the work.