the main / building materials / Instruments / How to distinguish a fake punch Makita 2450, 2470 the original
Content:

Especially popular among the Russian fans tinkering with his own hands deservedly Makita drills 2450, 2470. This popularity is underpinned by a high degree of reliability tools, their long service life without forced failure, simple design and availability of repair. As it is known there and forgery popular tool Makita, consider what is the difference and how to distinguish between the original instrument.

Makita Hammers made in various countries. Which can be determined on the nameplate, secured to the suitcase or the tool body.

If the nameplate is the letter A, the tool is manufactured in the US. The letter D indicates the German manufacturer (plants Dolmar), letter E indicates the fact, that the instrument is made in Japan, letter G - Made in the UK.

But there are also Chinese drills, produced in China and designated by the letter Y or ( K but it is often a replica )

In fairness it should be noted, Chinese drills made on the Chinese refineries, owned by European producers. Hammers made on some lines, of identical parts, the same working. The only difference: for the European consumer tools are double checking the quality. First, they are tested at the factory, and then drills are checked already upon arrival in the country of the consumer.

Third countries, including Russia and, manufactured at Chinese factories punchers do not pass even the FPC. But the quality of them have not reduced, but the price is reduced almost in 2 ... 3 times. And this tool is not considered to be a forgery.

If Chinese manufacturers can produce Makita drills for high-quality license, something about counterfeiters tools Makita 2450, 2470 do not tell.

How to distinguish the original from a fake punch Makita?

Counterfeit often indicates lowest price for this class of instruments.

Hammers Makita not available in sets of various formulations.

Definition of counterfeiting at the external examination suitcase

Factory suitcase necessarily inscriptions, and having formed embossed letters extruded. We forged the inscription of the case are in the form of letters or stickers, glued by hand. Fake label easily broken fingernail.

At external examination of the case for storage and transportation of the gun carefully examine the gaps between the lid of the suitcase. In the original suitcase gaps are either absent, are the same or gap around the perimeter of the contact parts.

Inspect the back of the case study. On the case of the original inscription necessarily applied words Makita dented white letters. Fake labels such cases are not.

Definition of counterfeiting at the external examination of the body punch Makita 2450, 2470

By a visual inspection of the tool body can easily distinguish a fake from the original. We fake the stator body color is more blue, whereas in the original it is more green.

Name to Makita rotary hammer housing 2450 the original is applied by casting. On the cover of the stator inscription convex, in the rotor cover a recessed lettering.

We Makita spurious 2450 an inscription on a green body is pasted, and can be easily removed using a nail. And the inscription on the black body absent.

Forgery can be defined and examined carefully the side handle punch Makita 2450. On the handle in place of the original clip handle inscription affixed indentation. There is no fake label on the side of the handle there are no.

A careful external examination, pay attention to the molding of plastic parts perforator. In poor-quality fake casting, with ragged edges, with traces of burr.

Look close, as the icons printed in the vicinity of the mode switch. In the original icons convex and tidy. Forgery same outputs uneven and ragged inscription, Made with obvious defects.

The original Makita 2470 inscription is formed by molding on the stator housing and the rotor housing at extrusion.

The inscription on the fake case Makita 2470 made in the form of stickers, or formed separately glued letters. It is easy to detect, podkovyrnuv edge of the nail stickers or letters.

There are original models of Makita hammers 2450, 2470, in which the label is applied to a green selfglue rotor housing, but it is hidden under the label, made by extrusion.

In the original Makita rotary hammer on the side of the additional handle two types of labels printed. One sign of white plastic, second inscription affixed indentation. The inscription of the white is separate casting and already, then painted white. At counterfeit labels on the side of the handle completely absent.

There are drills Makita, in which the housing affixed adhesive label. But if you look, under the label guessed inscription Makita, made indentation. 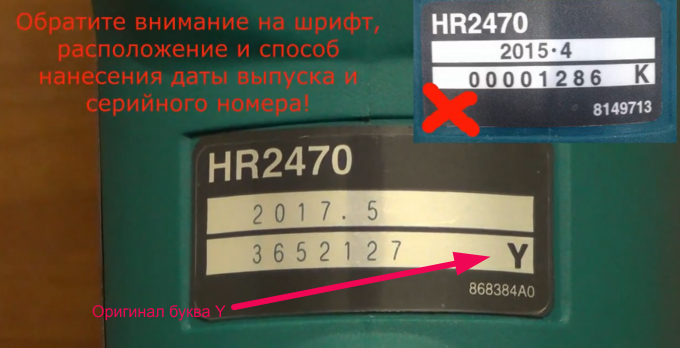 Unlike fake punch even found in the use of other screws.

What You Should Know, not to buy a fake punch Makita

In order not to run into dishonest sellers and not to buy a fake, it is necessary to get acquainted with our recommendations.

We recommend purchasing power tools popular brands in specialized stores, with the purchase of all necessary warranty documents.

We do not recommend buying a set of known-party tools. They do not produce such products. The kits usually include Bulgarian, hammer or a drill and jigsaw, and thus it is cheap.

We do not advise chasing cheapness! The low price of the instrument should you touch up on the idea, not fake it in front of you. Cheap - does not mean, qualitatively.

Factory Makita drills often are equipped with case for storage and transportation.

At external examination, you will be able to detect the main defects, talking about, that before you fake. If you found external defects, do not try to continue to hope, that lies within the drill prefabrication.

Information on counterfeit full Avito, Julia and the like sites, also a lot of fake chainsaws, screwdrivers, Bulgarians. Determine where fake and where the original is not so difficult, I think this movie will not make a mistake.

Opinion on the choice of instrument

It is funny and sad at the same time)) Already under way is a video posted, I do tool 15 years old, and all 15 , from year to year sculpt some friends here this nonsense - "Makita is not the same, Here used to be normal, and now all of China ". And the most interesting , that in fact nothing has changed, Makita has a 15 years ago, It was and remained. Even the country of production is not important, at about Makita 8 plants around the world and at all exactly the same quality control, that Japan , that China, in Romania. Moreover, many astray, that there are different types of assembly and ischyu Made The Japan Institute, so here ,production is distributed in the direction of and models, ie - light drills , as 2470, It is going at a certain factory and wherever you have not bought, at least in Japan , it is precisely from this factory. And in Japan collect only hammers SDS Max, and grinders in Romania, etc.. And further, manufacturer monitors the quality, by the fact that they offer a guarantee, and the marriage must not exceed 2-3%, otherwise the production becomes unprofitable. It is for this "brand" is not just a name , and quality assurance, and when you buy a proprietary branded thing - you are sure , bought quality , not pig in a poke. But with Chinese consumer goods all fundamentally contrary, there all the emphasis on price, Quality control is not to refuse work on time, but only on the, that it is included in general, on the purchase of such a tool is a lottery - lucky to work and a year and two, not lucky enough to die in a week)) Well, since I decided to write a great comment, then I will explain more nuance. Aside from this type of calculation of the forgery, the entire market can be divided into two, manufacturers and brands, manufacturer always has its own quality control and seeks to minimize marriage, trademark orders at third party refineries and quality control has no direct, only at the price. What is meant by "price", some Chinese factories the same product has different degree of quality and price, that is - you come and pick - that's the drill, but the price should be 15 dollars - and you will make on 15 bucks, choose to 20 , put on the best parts, in the end can do and 99% the original, but he will cost a bit cheaper than the original. This is what I, You want a good tool, buy from the producers, it is impossible to buy a cheap and cheerful, it does not happen)) Want to buy cheaper, best buy cheaper products, and not a fake, for example - do not pull Makita , buy Interskol, Fiolent, green Bosch, Skill, B&D, do not pull their, buy less decent trademark - Encore, Zubr, which, though it is important to trade on the market for years and they have not bought the lowest quality.

Videos about fakes the punch

1.Definition of counterfeiting on suitcase

2. How to distinguish a fake from the original punch Makita 2450

3. How to distinguish a fake from the original punch Makita 2470 and production of selected replica. Perforator Makita HR2470. What assembly can safely take and what not. What is actually - Replica.