the main / building materials / Instruments / The procedure for assembling the gun Makita
Content:

By the assembly of any mechanism should be initiated after careful preparation. It is necessary to prepare not only the details, but also tools, a place, lubricant.

Of the tools can not do without a pair of pliers, screwdriver, hammer, brushes for applying lubricant.

Makita perforator assembly with his hands can be performed only when the subject of the appended instructions.

The object of the assembly process is the replacement of defective parts published on fit and ensure interchangeability and tool efficiency.

But how to collect punch Makita hammer mechanism?
The firing mechanism is assembled from two nodes: stem shaft with spur pinion and an intermediate shaft with the bearing rolling elements. 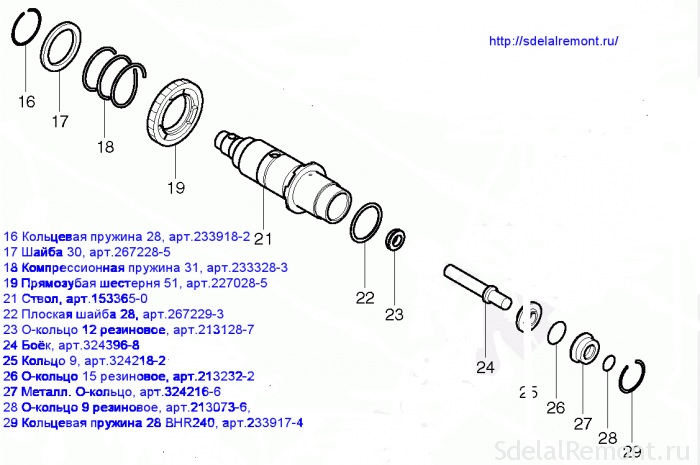 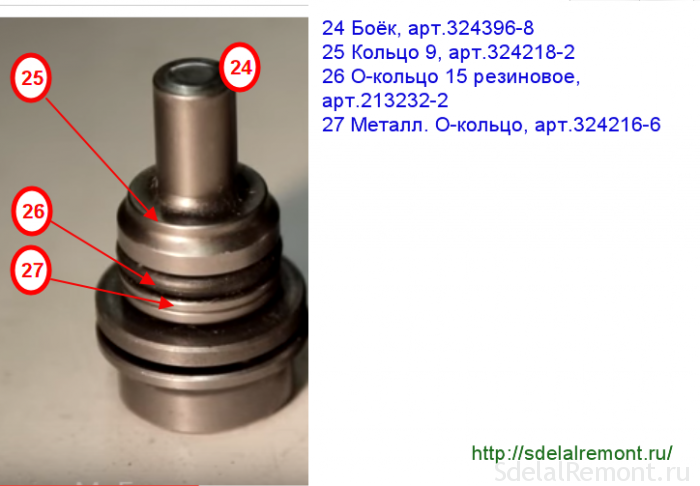 Now we go to the opposite side of the trunk poz.21. On the other hand the inner surface of the barrel should be lubricated with grease and insert into the assembled drummer poz.24.

The assembly of the intermediate shaft assembly

To assemble the intermediate shaft must wear poz.41 rolling bearing on a shaft poz.40 teeth to the shaft splines, Slots on the shaft wear sleeve poz.39.

Installation of the gear unit is made on the inner housing poz.49.

by the way, there are cases, when popping out of the axis of the inner aluminum shell. The chassis both axes are pressed. 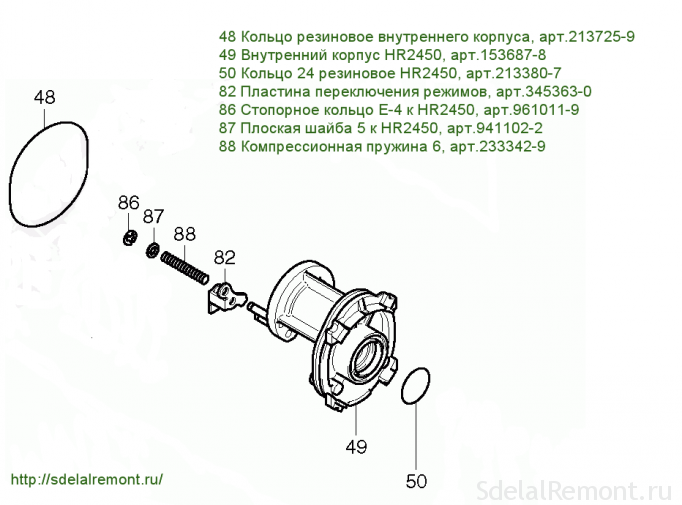 The assembled body is inserted poz.49 countershaft, Rolling bearing which lever, should get into the cylinder bore of the hinge. 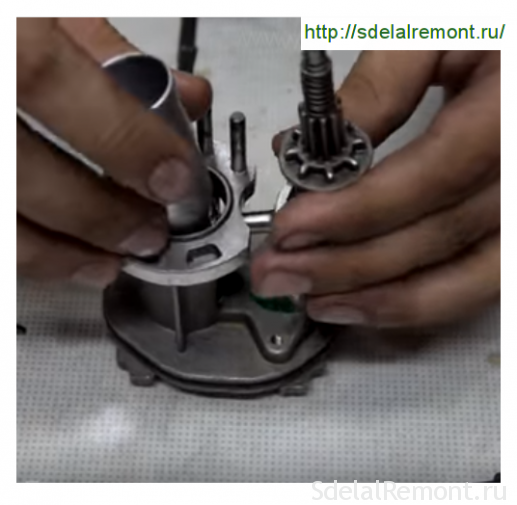 In this rolling bearing poz.41 intermediate shaft lever must get into the cylinder hinge poz.32, a lower bearing of the intermediate shaft into the slot in the housing. This procedure usually is performed by rocking the structure to complete contact pieces in said space.

Mode switch is designed to transfer poz.39 clutch in different positions and transmit the translational motion of the shaft impactor through the rolling bearing to the cylinder poz.41 poz.32. 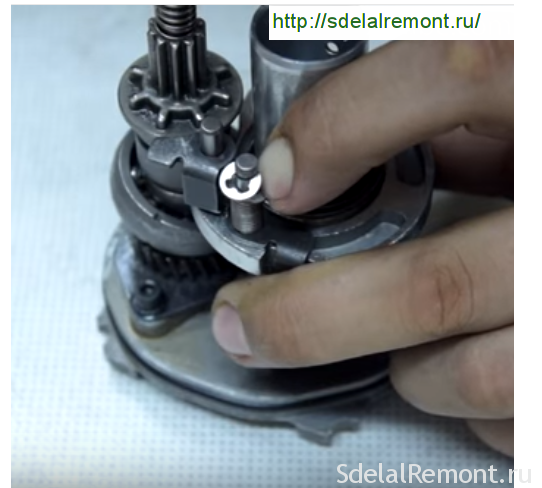 First you have to grease the inside of the cylinder poz.32 and insert the striker poz.30. 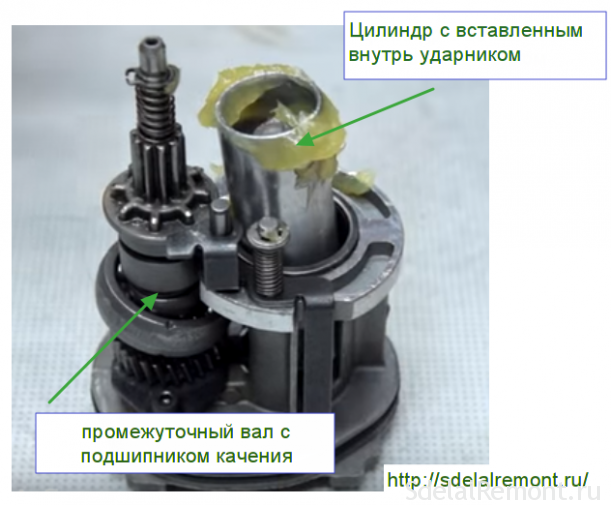 Lubricants vary in color, but have exactly the same characteristics.
And some grease used in punch Makita 2450 and 2470?

And here in front of us assembled mechanical unit.

Video total disassembly and assembly of the gun Makita 2450

Test it, rotating the intermediate shaft and controlling the movement of the piston in the striking mechanism. Everything!

Now smazhem all parts of the mechanical block recommended lubricant. Here is an example of proper lubrication on the rotating surface. 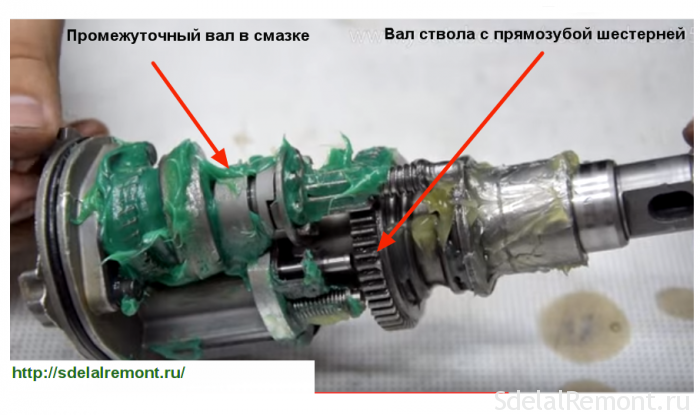 And here's another example of the generous lubrication of the mechanical block.

So, too, are allowed to apply lubricant. Porridge oil will not spoil!

Lubricated mechanical unit it is necessary to close the plastic housing pos.14 black.
Putting the body on top of the unit, press down until it locks housing assembly therein.
Backwardness insert four bolts pos.10 into the body and tighten. 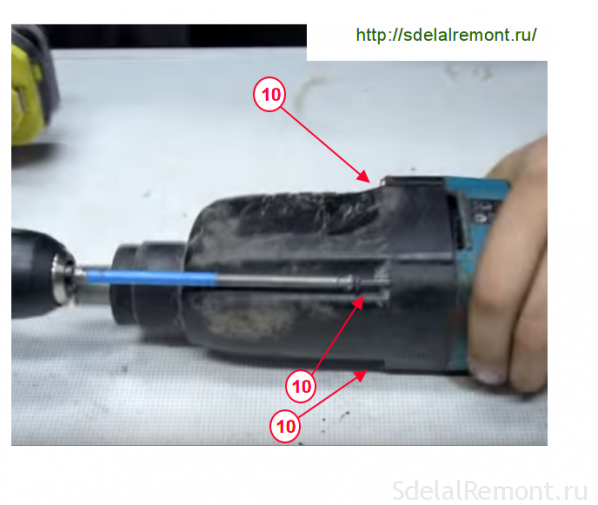 Now came the turn of accession to the mechanical part of the motor rotor.

The helical gear rotor tightly inserted into the mechanical block body and pressed. 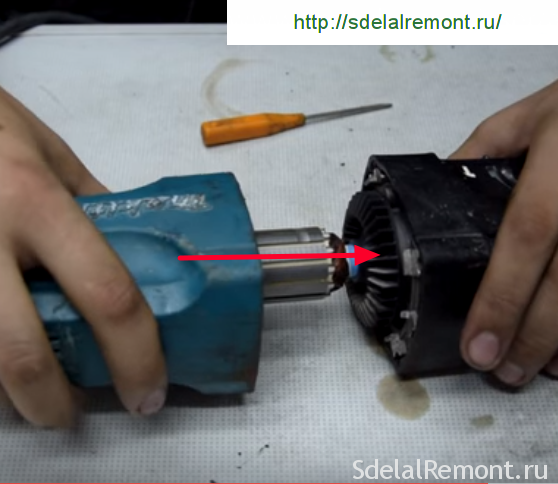 It remains to insert four self-tapping screws m4 × 60 poz.57. and screw them into the body for electrical installation. 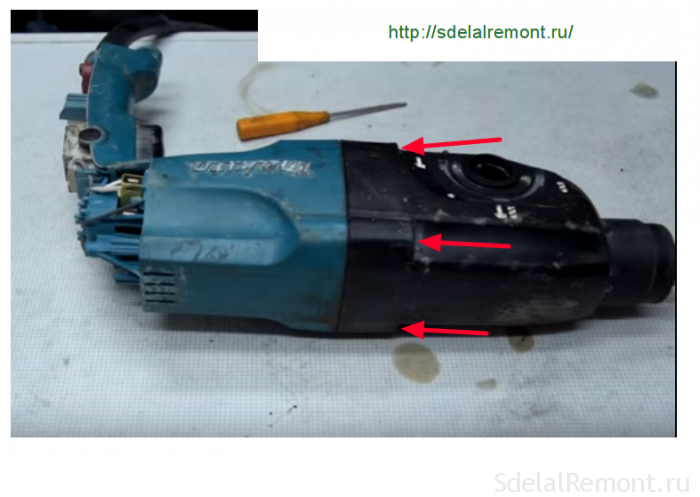 Remove dirt from the brush holder slots and set in place the brush, fixing their snaps. 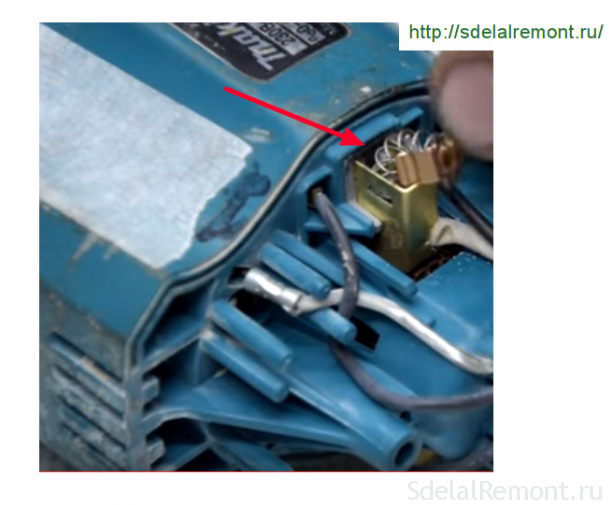 Now is the time to test the functionality of the gun. Connect the plug into an outlet perforator, briefly turn the punch in the "drilling" mode. Convinced of the instrument performance, turn it off. Put the mode switch to "blow". The tool does not insert.
Check the punch performance in this position. At the same time you checked and the operating mode selector.

It remains to check stacking the Inverter speed button, verify the reliability of contact connections, and you can begin to install the cap bill.

Connect to punch 220Β network and check for all modes.
Perforator Makita 2450 or 2470 assembled and working properly!