Danae article offers ways to find faults in the grinder various models of angle grinders and repair (angle grinder) their own hands. Here you can find answers to questions on the order of disassembly gear bolgarok most popular models, replacing the gear cogs, bearings and their repair. The recommendations on the order of pressing and pulling out the gears and bearings, repair methods and tools.

Along with common faults in angle grinders of different brands available and their features. This is not only the differences in the designs of Bulgarians, but also on the materials and components.

Important to, who made tool. Knowledge of the Bulgarians in the design allows for angle grinders repair their own hands quickly and qualitatively. The information below will help to repair any brand Angle grinders.

Along with original instruments, construction market is flooded with cheap imitations. And do not think, that fakes are made exclusively in China. Power of Chinese manufacturers for quality are as good as manufacturers of the European countries or the countries of South-East Asia.

To repair the Bulgarians with their hands, it is necessary to have a scheme of the LBM and understand it.
Repair Bosch grinder is different from repair grinders Interskol. And then there are the Bulgarians under the brand Makita, Hitachi, Metabo.

Before attempting to repair grinders, look at a few tips:

The most common cause of breakage grinders - wire break is near the handle. First you need to check the presence of voltage on the button, it is done in the usual voltage tester. Then check the button itself on the performance.

Removing the needle bearing or a plain bearing holder ruined

various bearings used in gearboxes bolgarok. They are subjected to heavy loads and are the cause of the fault.

The destruction of the bearing is determined by the increase in backlash spindle shaft. Dismantling the gearbox housing and remove the shaft of the large gear, you will see the needle bearing.

The needle bearing is not applicable in all Bulgarian. In the same grinder, in which it is installed, its dismantling can be done in several ways.

After removing the ruined part of the bearing, the inner ring can get using machine tap. Clamp machine tap suitable diameter in the screwdriver chuck and try it in the screw bearing race, until the tap touches the bottom of the housing. Continue to slowly twist the tap in the clip. He will lift the clip on a thread. 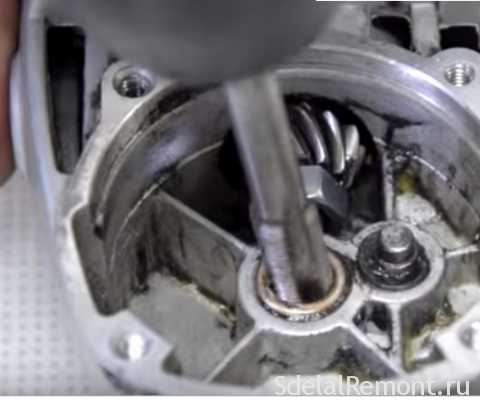 The second way is, What remains of the destroyed needle bearing cage can be removed using spetsbolta and retaining ring.

Repair gear grinders begins with the dismantling of helical gears. It gears are a major cause of malfunctions gear grinders. The grinders often have to change a small leading gear, mounted on the rotor shaft.

On the rotor shaft spur gear can be mounted in two ways: 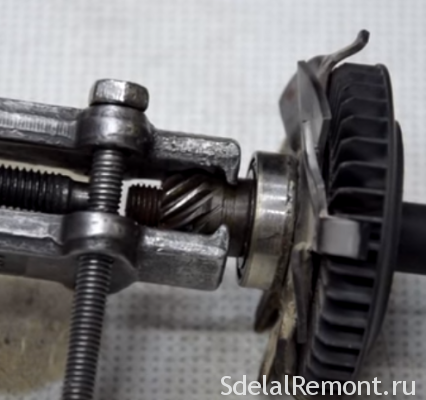 Much driven helical gear is attached to the spindle shaft, too, in two ways: 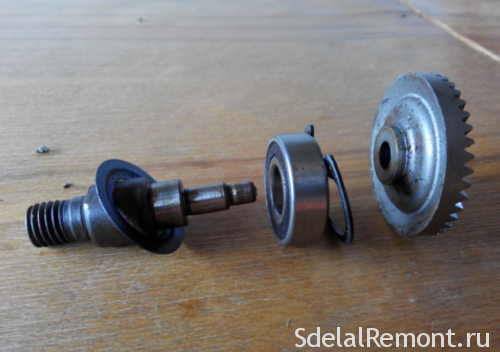 In addition to replacing the gears in the grinder is often required to replace one or the other bearing. And them in the Bulgarian construction at least three.

In this section we consider the design features bolgarok, produced under the brand Bosch, Hitachi Makita и, LBM as well as repair their own hands.

Bosch grinders are a reliable tool, does not cause much trouble to the user. But not every user is assigned to the tool correctly. Repair Bosch angle grinders often paired with the replacement of the bearings. 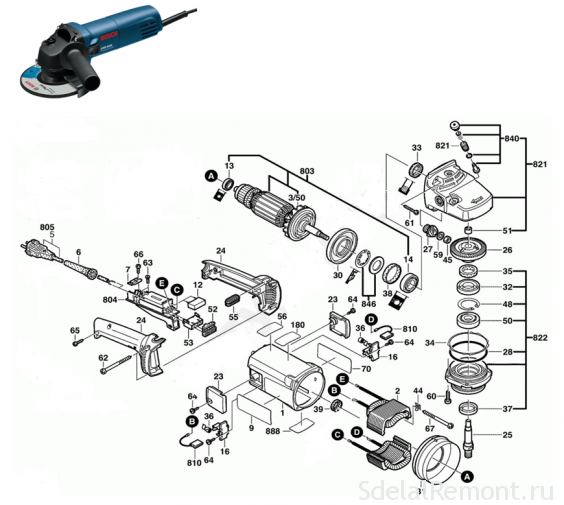 Structurally all grinders Bosch performed by the same scheme. poz.25 spindle shaft is pressed into the driven helical gear at 26 and is supported in the gear housing on the needle bearing poz.821 poz.51.

With the destruction of the bearing within the housing is a bearing cage, which is not easy to get. We recommend two ways to dismantle the cage needle bearing. They are described in the section "How to remove the needle bearing».

When worn or licking of teeth of pinion pairs replacing only both be pairwise. Dismantle gear, remember, that the drive gear is mounted on the rotor shaft threadably, wherein LEFT and fixed nut. Driven by large helical gear at 26 is pressed onto the spindle shaft poz.25.

Particularly popular among Russian consumers received grinder Hitachi. And it is natural. In the market there are practically no fake artisanal bolgarok Hitachi. simple design makes it easy to carry out repairs of any complexity. 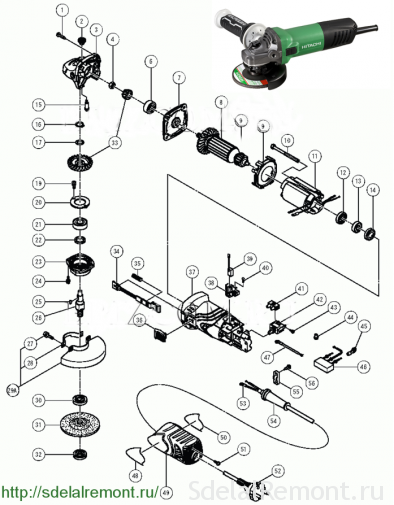 Understands reducer grinders just. To disconnect the gear housing pos.3 poz.37 from the stator housing, it is necessary to release the carbon brushes.

To remove the cover poz.23 gear, it is necessary to unscrew four screws poz.24. Poz.33 driven spur gear fixed to the spindle shaft by means of tabs at 26 and chafing stripper poz.25. Bearing poz.21 removed stripper. 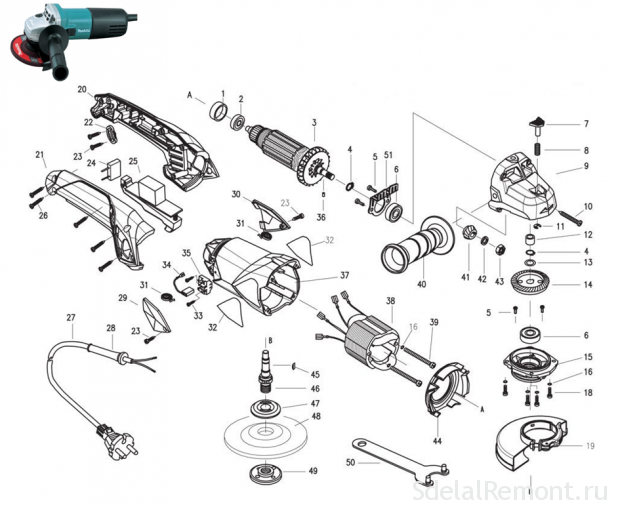 Makita grinders firms are more likely to come in for repair. But the reason in a high percentage of fakes, flooded the Russian market.

This Makita is a reliable, durable tool. But, like all Angle grinders, It suffers from the failure of the gear unit, its gears.

By replacing the gear reducer resort in the event of jamming or fracture. 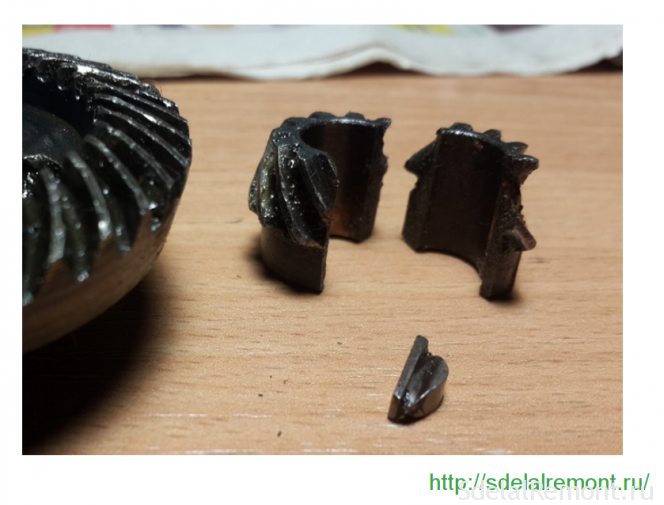 In the next step, remove the four screws poz.18, holding the rotor cover poz.15. Driven gear pos.14 removed with the help of a Persian. Pinion poz.43 secured due key connection and the fixed nut poz.42. the rotor shaft bearings pos.3 removed using pullers.

Among domestic manufacturers of the special place occupied by the production of such well-known brands, as Interskol, Fiolent, Lepse.

For proper operation of the Bulgarian Interskol can work for years.

Along with infrequent failure of the gear grinders, wherein the weak link is a pair of gears and bearings, marked instances of faults in the stator. 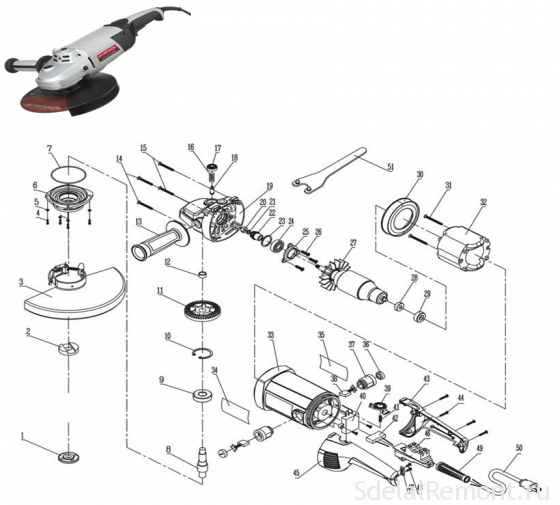 Driven gear pos.11 pos.8 pressed on the shaft and is removed by means of a press. Bearing position 9 is removed stripper.

Stator Repair grinders Interskol can be performed independently, if you know the required data. When disassembling the burnt stator you have to count the number of turns of wire used, its section. 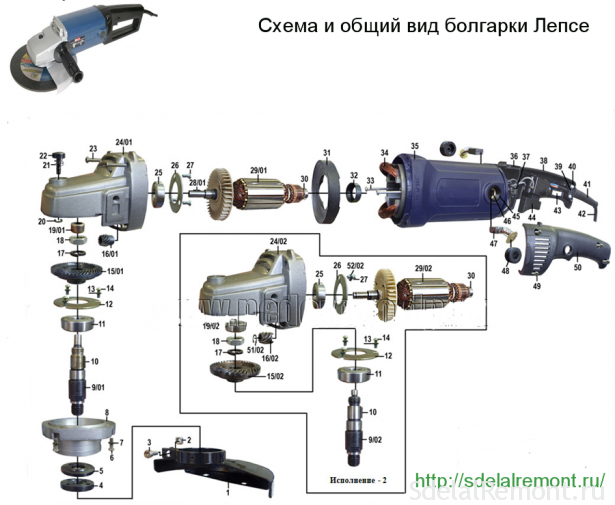 Advantages of grinders Lepse consist in the possibility of replacing worn-out carbon brushes without disassembling the machine casing.

Repair LBM Lepse in terms of replacement brushes is simple. Through special windows poz.45, stoppered, capped poz.48, poz.47 carbon brushes are inserted into the housing of the brush holder poz.46.

When repairing gear grinders Lepse have to dismantle a gear pair.

Leading small spur gear mounted on the rotor shaft and fixed to the spline nut.

In recent years began to enjoy great popularity Bulgarian Phiolent. It attracts not only an affordable price, but also a reliable tool. 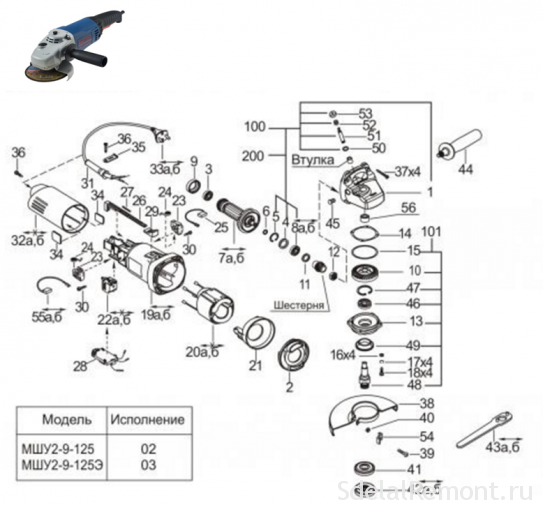 Repair Bulgarian Phiolent own hands is recommended to start with an examination of emerging faults. If you need to disassemble the grinder Phiolent, then to remove the driven gear pos.11, it is necessary to press out from the shaft of the spindle position 8.

To remove the bearing spindle shaft, previously necessary to remove a large helical gear. This is a minor inconvenience.

Replacing rotor bearings interfaced with the, it is necessary to remove a small helical gear poz.22.

Which repair grinders with their hands can make the user

Although the Bulgarian and is not a tool of particular complexity, perform a repair operation, the user can not be on all nodes.

Along with the simple replacement of bearings or gears the gearbox has such a fault, which can not be made without special tools or equip.

For most users, grinders repair their own hands is limited to a certain range of faults.

Grouping fault of the mechanical part of LBM

Simple Problems & diagnose and resolve their own hands

If you are clicking on the "Start" button will not turn on Bulgarian, the test start with a tour of the power cable to the input position in the tool.

If the power cord is intact, and the Bulgarian is not included, replace the "Start" button.

If the installation of the new Bulgarian button does not work, check the quality of attachment of the carbon brushes and a snug fit to the rotor manifold.

Complex fault and repair their own hands LBM

The following types of failures require specific knowledge and skills to address them:

A few words about the lubrication

The reliability of the gearbox and its longevity is largely dependent on timely replacement of lubricant and its correct selection.

In the Russian market of petroleum products is a wide range of lubricants. Among them are Russian manufacturer of lubrication. 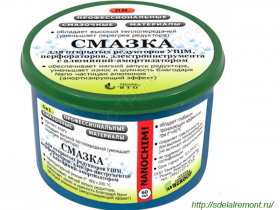 Modern manufacturers of tools is strongly recommended to use only lubricants of own production. It is the policy maker.

Of Russian lubricants recommend the use of lubricants specially designed for gearboxes.

But the quality of the Bulgarian work affects not only correctly selected lubricant, but mostly it timely replacement! Do not tighten with the lubricant replacement, monitor her condition.