the main / Floor / Floor coverings / Tile / Simplification of the system installation of the tiles with the SVP and DLS
Content:

As known, for mosaics, especially, if you do not have much experience with this material, there are problems with the formation of joints. Luckily, To date, the assistance may come tiling system. It's about these systems, and we'll talk. It is important to know their views, and be able to use similar tools for laying tiles. 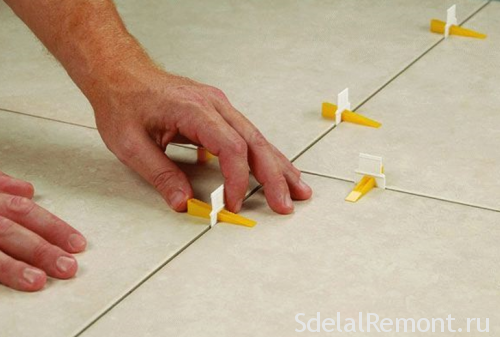 Advantages and disadvantages of devices 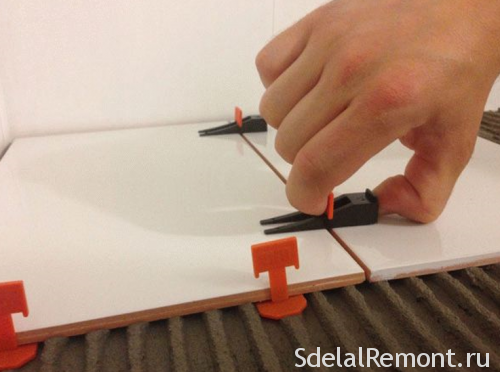 But, of course, Such a system tile SVP has its drawbacks, which must also be taken into account:

It is important to pay attention to the quality of the product before purchasing it, because on the market today, there are many fakes, that already during the early laying fail.

floor leveling system for laying tiles presented, of course, not in a single instance, Accordingly, there are several types of it:

the main thing, do not think, that this design will help do all the work for laying and distribution of glue, far from it. any type, whether tile leveling system dls or litolevel is only an additional assistant, which only can eliminate some of the shortcomings, but do not do the work for you.

Besides, important factor is the material and, to be used. Since the special role played by the quality of the tiles and the adhesive mixture. 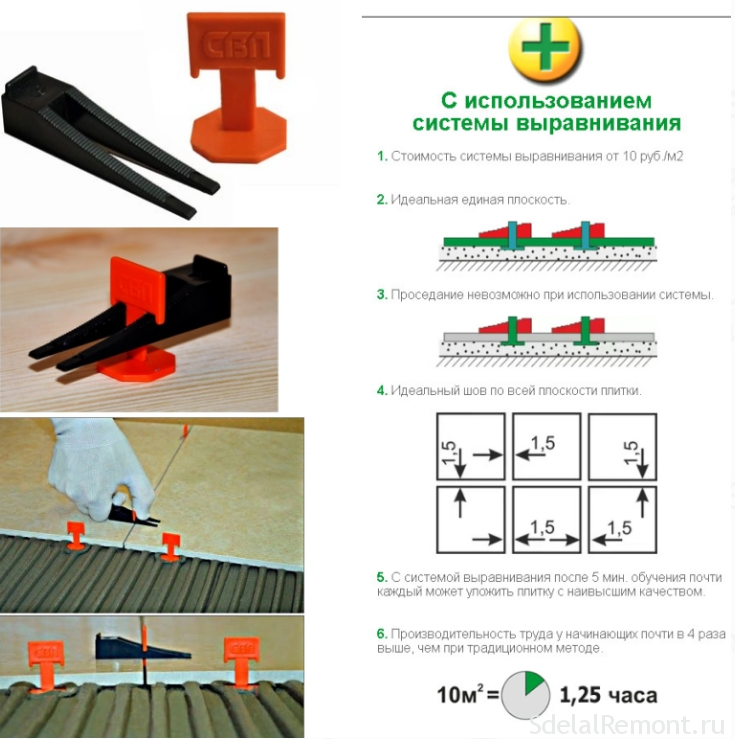 Now it is necessary to consider and use of such devices. By itself, the use of technology is quite simple, but still need to get acquainted with it, understand and practice.

It should be noted, that without fail the entire clutch is held at the level of, and each tile is checked laid. Thus possible to achieve maximum quality of the work performed. Then held grouting.

You can count the number of bases according to the table below.. the quantity depends on the size of the tiles, for example, 60x80 tiles on 1 m2 of laying will be needed 10 PC. ( as in the pictures in the example) but I recommend taking the basics with a margin 15% so this is how the table does not take clipping into account. wedges are usually taken by the ratio 1 to 3 3 packs of basics, 1 a pack of wedges, etc.. for large volumes, I recommend taking at least 600 wedges ( in order that they would be enough for 1 work day, after they go astray and are used again)

Despite the fact that the tiles fixing DLS easier to use, but the cost is more expensive than the SVP here is the right choice for a master, and carry out their work, both systems.

so, we have considered, What is SVP, its strengths and weaknesses, and a method of using. Now, after you just have to use such a system at home, the performance of work, or not. We hope the information provided for decision-making will be enough. Also watch the video which clearly considered, how held tiling using SVPs and DLS. If you have any further questions on this subject, not stesnitesy, write in comments, and our experts will answer them.