the main / All electrics / Ventilation / How to choose a good fan for the bathroom and tips on installation
Content:

Bathroom is a place in the house, which prevent the occurrence of moisture is almost impossible. While taking a shower, bathroom with steam fills up quickly, and due to the fact, that the room is usually small, it begins to accumulate on the walls of the condensate. Such surplus moisture in the future may lead to deterioration of furnish. Concerning, most consumers install an additional fan. Let us consider in detail, how to choose an inexpensive but reliable fan for apartments and other premises.

The principle of operation and the fan device

drawing design for the bathroom is a simple device: it consists of a fan and vent. Last connected to a common exhaust riser home, so that there is forced air circulation, and moisture gradually evaporates. Today, there are two types of internal fan device:

Also in the present device, some fans check valve. This bonus is good for owners of apartments in high-rise buildings, because the work of the check valve allows foreign odors from neighboring apartments do not penetrate into the room.

Types of fans for bath 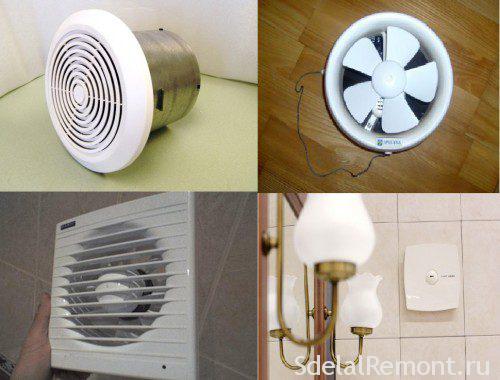 According to the internal structure and features of application, the fans are divided into:

At the entrance to the collector hood mounted, which improves the aerodynamics of the device. This type of fan powerful enough compared to other types of devices. Mounting the fan only on the wall. It is the most popular variant of fans today, although it is quite noisy.

Do not forget, that the fan is not interior decoration, a serious element, allows you to display the moisture out of the room, Therefore, choosing the instrument, immediately identified with the inner product.

Pros and cons of exhaust fans

The majority of apartments provided house-ventilation can not cope fully with the circulation of air masses, it would be preferable to install an exhaust fan in the bathroom. The main advantages of such a device will:

There are also some disadvantages in the use of exhaust fans:

Plus the use of exhaust fans for the bathroom much more, than minuses, because they are a great tool for air extraction and purification.

How to choose a fan for the bathroom?

Once the decision on the choice of fan made, must take into account the basic parameters, are worth paying attention to:

The high cost does not always speak about the reliability and functionality of the device. Before you choose a fan, examine all proposals and compare their characteristics. We recommend that you read the advice how to arrange the ventilation in the room.

Installation of the exhaust fan is quite simple. This requires such tools and materials, as: Bulgarian, drill, screws, indicator and ordinary screwdriver, terminal connector, power cable.

In the case of an independent device connectivity, necessary to lay a line from the junction box to the fan switch, and then to the device. If the wiring diagram of the chosen model has features, they are always listed in the instructions.

Step by step installation of the fan is as follows:

With self-fan connection, Observe electrical safety rules. Do not forget to turn off the electricity when laying lines from the device to the switch. Use only terminal blocks for connecting wires, it is convenient and safe.