the main / All electrics / Wiring / Mounting the switch box
Content:

The importance of the switch box in an apartment in the house's electrical system is extremely high. Wiring can not efficiently and properly function without the proper distribution of electricity consumers, a fire and electrical safety will be minimized if the required security elements. Of course it would be better, if wire laying and installation of the equipment will be handled by experts, but a study of the issue (this will help you this article) you will be able to mount the switch box with his hands without much effort and cost, collecting simple circuitry. The main thing to understand, what are the power supply circuit, what equipment must be selected, how to calculate the electrical load, how to properly and evenly.

General questions about the electrical boards

At the moment, there are two types of electrical panels. The first - an old and fading into oblivion - a shield with fuses (or stoppers), which were disposable, and had to be unscrewed to replace, and modern devices, equipped with the packet switch systems (guns). of course, better use of modern technologies, because they surpass legacy systems in terms of reliability, Safety and durability, Yes, and take up less space, but they can not be repaired. In stores you can buy plates as already with vstoroennymi breakers, and an empty "box" and have to install the necessary equipment.

Electrical panel in the apartment, power supply circuit which can be varied, and the number of consumers and their power over time can grow, must be selected with additional places under breakers.

introductory machine, usually able to simultaneously disable and "phase" and "zero", should be chosen on the basis of the total load apartments. The magnitude of the current and its protective characteristics above, than that of the auxiliary machines. Usually, for two- and three-bedroom apartments suitable machine at 32-40 amperes (order 7 kW), if the load is less, Machine can take 25 or 16 ampere.

What about auxiliary machines, mounted on the "phase", they are necessary for the protection of individual rooms or devices. Experts advise to put a machine on each consumer, whose power exceeds 1,5 kW (heating tanks, washing machines, etc.). Table exemplary electrical loads situated below.

OUZO (breaker device) - an extremely useful device, if you want to raise the level of electrical protection in times. Responsive to the slightest leakage currents and voltages, instantly de-energizing circuit. In the presence of the house bathrooms and children's rooms, equipped with electrical appliances, RCD selection will play a particularly important role.

Flap electrical housing or abb legrand is of two kinds:

Selecting the type of installation is mainly dependent on the type of wiring - if the open-wiring installation is the ideal surface-Shield - a shield does not require special training places, fastening to the wall by conventional dowels, nails or screws "screws" (everything depends on the material of the wall).

If the wiring is concealed type (ie. built into the wall), the best option is setting the embedded shield. It's all more complicated, because it will have to peck a wall. Importantly do not forget to make sure, that allows you to set the thickness of the wall panel. After creating a niche, It is greased fastening solution of gypsum or alabaster, and in a box built "box". More convenient to use a plastic shield. The upper part must contain introductory machines, which is located under the counter. It is attached by screws. Installation of the meter is performed after the completion of, associated with electrical device. This is due to lead seal.

Mounting the switch box must be performed on a hard surface - in the place, where he was easy to reach and serve.

According to the rules of the shield arrangement, it is set away from the gas and water pipe. It should be located on a flat wall surface with a maximum slope 1,5 degrees at the height of 1,5 meters from the floor. If you can not arrange counter far from places of potential damage, it can be put in the closet, equipped with a viewing window. Fixing wires may be using bandage knit.

What about materials, of which are made shields, this can be as metal, and heat resistant plastic. The second option is more convenient in assembling and operation, safer, and the appearance of its attractive.

so, with the installation of the box itself was dismantled, Now let's look, arranged as an electrical circuit board. 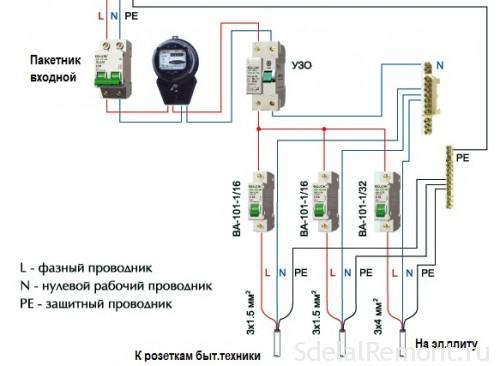 Basically, all the same type of electrical circuit boards, but there are key factors, for which they are collected, this includes:

Voltage is applied to the opening machine (it is better, if bipolar) and goes to a single-phase electricity metering unit, where it comes to the RCD. Further there is a direct and splitting the phase distribution of loads by means of circuit breakers and other RCD. for example, Machines will be separately for lighting, at the outlet and the powerful consumers.

Apparatus switch box with a three-phase power supply system similar, Only the opening machine, RCD and three-phase electricity meter will, and the whole system will be more both in terms of size, and in an amount of automata and connecting conductors.

Now let's look, how to assemble electrical panel. First and foremost, in the shield, with screws, DIN-rail mounted. Because it itself is a metal plate, to which will be attached later all switching devices. To create the desired length can be easily sawn hacksaw.

In addition to the DIN-rails mounted on the shield casing terminal blocks (different distribution bars). Their role is to Connect zero conductor. If the apartment or old-style house and the whole system is performed only phase (3 phases) and work to zero (performed wire blue), only one terminal block. If the system is designed according to the rules, and there is an additional yellow-green conductor (Protective zero or ground), it is necessary to put another bus. At this point in time are commercially available tires, the design of which allows you to mount them on a DIN-rail, like machines.

After mounting DIN-rails proceed to the fastening of automatic switches. The modern design will make it very quickly, quite on the upper side of the flat screwdriver to delay latching device automaton, put the machine on the DIN-rail and remove the screwdriver. Removal is carried out similarly.

Next is a step by step description, how to build a single-phase electrical panel:

The compound can be produced in three ways:

What else you need to know?

Installing the switch box and the assembly - is not only the ability to assemble the right scheme. Also need to know some of the nuances, to later do not regret the time spent and the forces.

It should be remembered, that make the assembly and installation of the electrical panel Legrand, ABB or of another company of equipment must be strictly on the disconnected power lines, after checking the voltage.

To attach the assembled panel to the current system, necessary to involve employees of the organizations concerned. For apartment buildings are representatives of condominiums or housing office.

In the end, after all assembly and connection process, must be closed or fasten the lid to check your work, by applying a voltage to the conductive part of your shield.

Especially for site apartment repair by yourself.

One comment on the record "Mounting the switch box”