the main / All the repair / Walls / Plaster and putty / How to align the wall angle
Content: 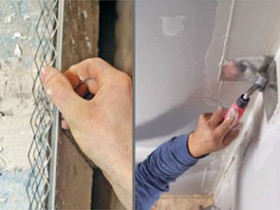 Alignment angle - is the final stage of finishing the wall surface, before its final, finishing. The process is quite complicated and laborious, but make it possible, and their corners rukami.Glavnaya difficulty removing their hands, It is, that there is a clear need to achieve compliance in the 90S. But, on the other hand, question, and whether the angle needed to 90C shirokogranny. You do not always need a clear elimination. let us say, if you have at this point will hang the carpet, deviation of a few degrees will completely unnoticed. But during the installation of modern, stilizovannoy furniture, even half a degree of deviation is evident. But it does not mean, You can leave everything as it is and not deal with this problem.

How and what to equate?

How to align the angle of the wall plaster? - There are two possible answers to this question: by wet plaster or plasterboard. Consider options to address this issue.

The main advantage of gypsum board is, its surface is almost perfectly flat. With this element, you can align even the most difficult corners. Besides sheets are mounted on the frame of the previously prepared aluminum profiles, so you can hide the curvature and irregularities of the walls within a wide range, to 10 cm! the question, how to align the inner wall corner, the best you can answer the wizard, working with plasterboard is not the first year.
Speaking about the shortcomings, they are in alignment and subsequent putty joints. Besides, corners have to manually withdraw, but do it on a flat surface, it is much easier.

Plastering - about, how to align the angles of the walls by means of plaster, everyone knows. This method is known to our households for many decades. Among the shortcomings, is the large amount of dirt, physical and time costs, mastic has undeniable advantage. The fact, it is ideal for alignment angles in the case of small fluctuations heights. Also in contrast to drywall, it will help to save valuable space in the room.

Directly on the corners deriving

The most practical and rational way alignment angles in a small apartment, still it is to use the second method. Plaster wall corners with their hands begins with preliminary cleaning of old wall.
fundamentals:
• with a plumb and level, fitted as close as possible to the value of 90C;
• In order not to spoil the derived inner corner during plaster, pre angles okleivayut special tape, which will fix the value obtained, and also to strengthen the structure itself;
• After that, as a place of work had been carefully prepared, and the angle displayed, proceed directly to the plaster and putty.

Apply a layer of the mixture must be carefully and uniformly, preventing irregularities. When processing constantly use level, and in the case of, if you find deviations - immediately align their, until the material is dry and has not lost elasticity.

You can use special profile, If you decide to resort to a method for Plasterboard. Corner profile is attached to surface angle, then trimmed and processed (padding, oštukaturivanie, putty). Profile will not only smooth output angle, but also to strengthen its. because plasterboard, material is very brittle and in the absence of fortification components likely fracture or chipping at the slightest mechanical contact.

How to plaster wall corners with no errors? In fact, on, as plaster stage will be carried out properly, It will depend on the aesthetic component, and the service life of the treated structure. In order to properly carry out the plaster, denote major mistakes, which allow many newcomers:
The works were started without a preliminary analysis of. In this case it is carried out on the assessment base, determining the material. If you picked up the wrong building components, which can not be combined with the base material, In the future you will have to take care not only for the withdrawal of the angles, but also about facing, elimination of cracks and bruises.

Be sure to attach the wall angle,that would determine the angle. Then put the rule to the level of, This will help determine the rubble walls.

So you determine what kind of material used, plaster or stucco shpaklovku.Nanesenie without primer: in such a case, after the drying of the surface layer on slopes and angles are outlines of the blocks, panels and bricks.

So, how to make a smooth corner of the wall plaster or plasterboard? The first step is to bring them up, using levels and plumb lines. Then align the blister by finishing, strengthen tape or profiles and only then can proceed to the surface treatment and plaster putty. But, before the grout be sure to treat the surface of the soil with a mixture of. Now you know, how to align the outer and inner corners of the room.