To choose the best laser level is important to determine, for what purpose it will be used. At the moment, the most accurate measurements to help perform laser units, with which you can create in the planes vertical, horizontal or crisscross at right angles to the laser line.

The simplest type of laser level is considered to be a point Builder, projecting a beam. Such tools have a flat surface, allowing applying them to the wall for straight lines. Point levels are most commonly used in everyday life, since they allow to perform well thought-millimeter markings for wallpapering, strengthening shelves or pictures. 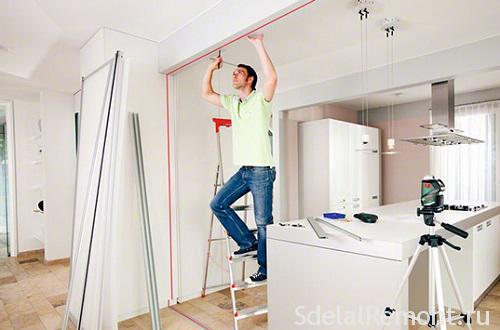 If the planned complex installation work, It requires more technological device - linear level. such devices, It allows you to create straight lines of the rays, diverging in different directions, and work with intermediate points are suitable for road marking not only on the wall, but also on the floor or ceiling. similar levels, including user choice often falls on the model CONDTROL XLiner Combo Set, Laser LevelPro3 и CONDTROL XLiner Duo, widely used in the execution of works in the field of repair, finishing and leveling montazha.S using these beams can be projected only nafragment object, at which point the tool. To perform markup on the opposite wall, level have to turn.

Even greater opportunities open rotary tools, in which the laser is irradiated not from the side of the device, a head disposed above the rotation. Respectively, it may be the space in a radius of 360 °. Some versions of these tools can project not only horizontal, but also vertical beams, which makes them particularly useful in the construction of large objects. Most often, a laser builder of planes 360 Radiation range of up to 80 m professionals use. Such devices are much more, than a point or line. In the video, the review the best models of the levels from Bosch.

Additional Information: Builders are experienced precision laser levels, because they have constructed buildings must comply with national health and safety standards. In life there is no such need, that allows the use of lower-cost tools.

What to look for when choosing a laser level

Determined, which calls for a laser Builder, before buying it is worth to analyze the other important parameters, including:

Almost every review of laser levels It includes such an important parameter, as the distance measurement. On the market are devices, allowing to apply the rays in the region of 5 to 400 m. For use in a domestic environment it is best to choose the devices, allowing to perform measurements at a maximum distance 20 m, because such devices are much cheaper, than professional and use less battery.

The best solutions in this category experts call: Bosch PLL 360, goat 888 and ADA Cube 360 . Effective in popular builder Bosch PLL 360, by means of which it is possible to build horizontally long 20 m around the device. This is a great option, which can be used as a private entity, and professionals.

If you are planning a large-scale building works, or in an open area, should give preference to devices, able to apply the rays in the region 50 m or more.

Depending on the design features, Lasers can project a different number of rays from different directions. The cheapest units can lay no more 1-2 lines, which is enough in the performance of finishing works, complete furniture or road marking locations on the wall of any objects.

If the design allows you to create cross-beams, you need to specify in advance, Is there a possibility to use them individually. If it is true, it is possible not only to save battery, but also to avoid in a large room Eye Exposure rabotnikov.Kogda work is carried out and when executed several construction workers involved, should give preference level, allows simultaneous work with multiple beams.

defining, a laser level best, worth considering, that the cost of rotary mechanisms rarely drops below 140$ (when it comes to models, allowing the construction of only one plane), and the price of high-quality professional equipment starts at 350 $. Domestic use such expensive units often not justified, because even simple models often have a good range of options, fully meet the needs of not only the homeowner, but experts, Used daily in their work laser measurement technology.

Whatever I had excellent quality laser level, this tool can allow some errors in the measurements. Because of this phenomenon can not be avoided, manufacturers always indicate the existing errors in the technical dokumentatsii.Pokazateli are calculated in millimeters per meter of passing a laser beam. The smaller the parameter, the more accurate measurement allows this device.

Many modern laser levels are self-leveling function, Provides built-in compensator, capable of reacting with the deflection device from the initial position. They are called a leveling samovyravnivayuschimisya.Esli installed improperly, the unit will beep or light. Also, the operator will have information about the rejection of the device in the wind or accidental tripping device. As soon as it is returned to its normal position, audible alarms will cease.

self-leveling function is much more effective bubble device, used in laser levels of older models, as it allows to set the machine up to 1-2 °. But it will interfere with the, if marking is required to put a specific angle.

Many modern devices have Sleep function, which saves battery power and a triggered, when the device is not used for a certain period of time.

Other popular and substantially facilitate the work of additional devices act:

Most often, for indoor users are choosing cheap laser levels, including popular models of ADA Quadrant A00357 and Kapro 891. Although the cost of such units does not exceed 30$, they are quite functional, because they allow to build a right angle at the same time the two lines, which is very convenient when you make the walls and tiling.

expensive models, the price of which does not exceed 80 $, can project vertical and horizontal lines, It allows you to create 2D projection. This category includes a large number of devices, in which include ADA CubeProfessionalEdition, Hitachi HLL 20 HTC-H00103, Condtrol MX2 1-2-085 и BoschQuigo II. In this case, better to choose a laser level leveling, manufactured by well-known brand: most often it is a guarantee of good equipment and proven technology solutions. If your device is only necessary to perform household works - do not hesitate to stop the choice on the devices in this category, desirable - buy units with brand tripod or stand, ensuring maximum measurement accuracy.

The most difficult to make the right choice, who knows, how to choose a laser level for professional use. In this case, the device will be operated continuously, using it will need to solve complex technological problems in harsh environments.

When selecting mechanisms for work in open areas, in the first place should take into account such factors, as the temperature range, wherein the unit will be operated. In most laser levels and builders are used at temperatures of from 5 to 40 ° C, which are also suitable for use in heated rooms. If the work is scheduled to perform in the cold season, the operating range of the device should range from -10 to 40 ° C. among the devices, corresponding to these parameters should be mentioned KaiTian 5 Lines 6 Points, Ada 2D BasicLevel и KAPRO 888.

Particular attention should be paid Builder ADA 2D BasicLevel, equipped 3 rotating heads, that allows you to create a three-way requisition. Additional advantages of the model can be called a good visibility of the line, even at large distances and high accuracy of construction. is superior not only to the budget As a result, this unit in any ranking, but expensive professional models. Good and its equipment, which includes mounting and magnetic target.

In open areas it is recommended to use the equipment, having a high grade electrical protection (at least IP54), eg, the choice could fall on the model KACKAD 2K-IP or ADA 6D Maxliner. In this case, the equipment will be securely protected from moisture and dust particles.

Lasers, to be used in open spaces must have a tripod for fixing. When working in enclosed buildings is possible to manage device, allows you to attach the unit to the wall or a small tripod, it is recommended to buy a more serious accessory to perform more serious work, the same model, so that it fits the diameter of the thread.

One of the features of technological laser levels - the possibility of creating laser planes in 2D and 4D formats, and projecting a plumb points. 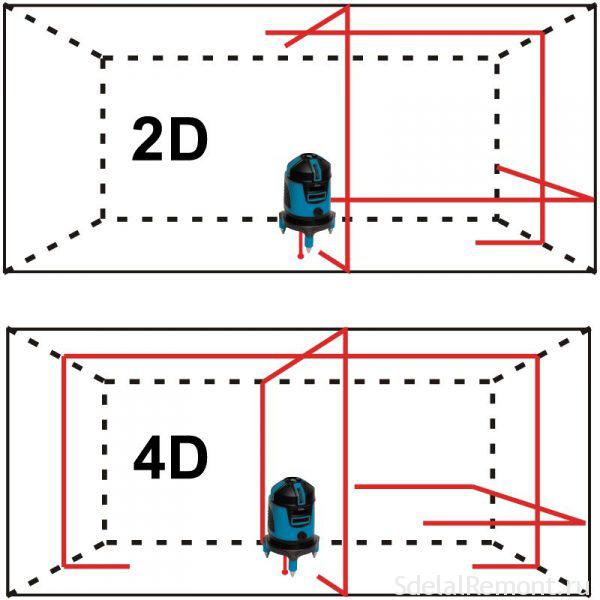 The cost of this category of devices starts at 110$. Its a good budget representative, included virtually every top laser levels, is Condtrol INFINITER CL5, allowing you to quickly and efficiently carry out the design work on sites with difficult terrain and buildings with an abundance of design solutions.

Not less effective Laser Level Bosch PLL 360. Unit price starts from 130$, but the level possesses fine-featured, including the possibility of building not only the direct and cross, but the circular line.

so, quality laser level - an indispensable tool for everyone, who is engaged in the construction and repair work. Quality device saves employee time and perform the most accurate layout regardless of the complexity and location of object. Most ratings proposes to give preference to the mid-market devices, exhibit outstanding functionality and ease of use.

Although presented in this review model belong to different segments, one can choose the most appropriate decisions on the basis of quality and price ratio, as well as the scope of use. The top includes an inexpensive laser combined Builder Chinese production KaiTian 5 Lines 6 Points worth 50$. A ratio in the professional level leveling ADA TopLiner 3 × 360 in price 350$. These models are in great demand. The development in this direction is constant and there are new models.