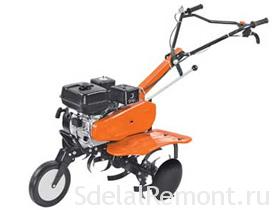 Hand cultivator - your assistant in the summer cottage. Then came the moment, When the cold season is slowly coming to its logical conclusion. Soon the time will come, when all the summer residents sent their strings on land, to hold the first cultivation of land and plant vegetables. Great help in loosening the earth, her weeding and preparing furrows for planting your favorite vegetables you will have a garden cultivator - hand tool, able to combine several functions, which are usually dealt with by several items of garden tools with great physical effort. Today, let us consider the basic criteria, species, best prices, Before you choose and buy garden cultivators.

Variety of hand garden tillers and how they work

The simplest kind of garden cultivator is a steel nozzle for relatively long cutting, which consists of fifteen- or go direct tridtsatisantimetrovyh the closed metal teeth. Their number may range from three to eight. With such a cultivator, you can easily loosen the soil or weed the weeds. It is worth noting, that working with such a device occurs standing, you hold the handle with both hands, then pulling nozzle with teeth toward you, loosen the right piece of land.

If you use a regular hoe, you will have to spend on the cultivation of the land you 2 times longer, than if, if you resort to using a hand cultivator.

There are even more convenient varieties of garden cultivators. The so-called stepping harrow for cultivation, which is usually still called hoe with wheels. This device has a much more complex structure, than the previous instance of cultivator tines. It is equipped with 2 wheel, handle, whose length can be changed at your discretion, and several feet-nozzles with asterisks, that, as a matter of fact, and treated with a soil. This garden cultivator help you in plowing land, as well as the cultivation and weed control. Note, that each type of work you need to install wheels of a certain type. So the big wheels will need to open areas, thus achieving a sufficiently high rate of work. But weeding should take care of the installation of small wheels, for accurate work near your planting.

The main advantages of this cultivator are sufficiently high speed tillage, as well as the possibility of cultivation, both literally, and in the opposite direction. It is worth noting, that in comparison with the usual hoe, you will be able to save 6 times longer.

But be careful, cultivator on colossi suitable only for ground plots of land, It does not contain a huge number of stones, otherwise you may have some problems in walking-cultivator.

How to choose a garden cultivators

Hand cultivator must have a removable handle-cutting. Its height can be adjusted depending on the individual growth, who uses it. Also, the handle can also be used when working with other garden tools. When buying a hand cultivator should carefully inspect its metal star-shaped knives. The highest quality of them are made of special steel, that makes them resistant to fracture. The scope of the purchased device two sets of wheels should be included, no less 4 stellate nozzles work the land to a depth equal to four or five centimeters. It should also pay attention to the fact, that it was possible to remove the central axis of the star-shaped wheel, It is making it possible to weeding to control weeds on both sides of the beds.

To date, the market can offer customers cultivators domestic and imported. But it is worth considering, that the cost of imported hand cultivators will be several times higher. Depending on the model, the cost of domestic cultivator can vary from three hundred to five hundred rubles, but the price of foreign production units will cost you two or three thousand "wooden".

Cost walking cultivators possessing starburst nozzles will be from four to two thousand rubles on the domestic models and from a thousand to three for imported models. But a lot will also depend on the size and configuration model.

What is the difference between imported models from domestic, times the price so dramatically different? The fact, the difference lies in the quality of production technology, also you will have to pay a premium for the name of the manufacturer.

Use hand cultivator can like adults, and children. Even pensioners will be able to master this instrument. This tool requires much less physical effort, than the use of other tools, such as a hoe or a shovel. Star-shaped legs are able to boast effectiveness weeding flower beds, Damage by root weeds system, and then extracting them from the ground. Applying manual garden cultivator, you will greatly reduce the time needed to weed beds. This means, more time can be given to outdoor recreation.