the main / Floor / Selecting the installation of beacons, for floor screed
Content:

Anyone, at least one time, poured screed, or work with Polymer Flooring, He knows, that most accurately gorizontirovat surface is almost impossible without a previously exposed lighthouses.

The main objective, decide which beacons for self-leveling floor, is a reference plane horizontal upper surface poured, which allows to control its thickness anywhere ties. In addition, the data structures are used as guides for the rule, which dry filling or flooded mixture was evenly distributed over the surface of the base.

Lighthouses are built from different materials and in different ways, are selected considering physical-mechanical properties of the material, used for leveling the surface of the room, the type of substrate, by which to fill, the planned thickness of the layer of the future and the level of training of persons, conducting work.

Most often in the regeneration of self-leveling floors using beacons. Details of the methods for the selection of materials beacons.

All used for leveling the fill guide surfaces, when considered from the point of view of geometrical, It can be divided into two groups: linear and point.

Lighthouses under the self-leveling floor similar design, more often, used by experienced craftsmen, fluent technique arrangement screeds on any grounds. Besides, this choice is best for self-leveling floor, due to the inherent ability of the polymer rovnitelyu spontaneously gorizontirovat upper surface, one side, and low power of these ties, with another. 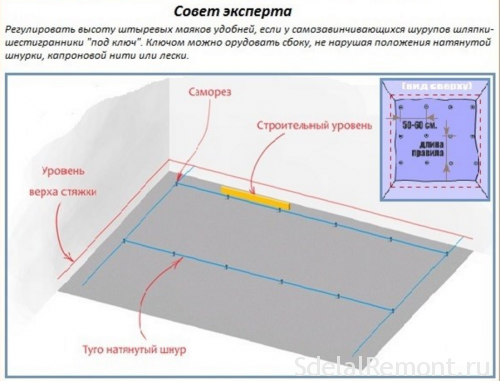 Some artists prefer to self-tapping screws bolts, tk. they can adjust the height of the key, it is much more convenient screwdriver.

are self-tapping screws, in fact, the simplest embodiment of the second type beacon (point).

For reference. Having decided to establish such beacons for self-leveling floor, remember that, that it is used exclusively on the basis of concrete. The reason is, that the screw is screwed into the base, damaging the integrity of the waterproofing covering, which protect any wooden base.

Selection of the screw length depends on the intended thickness of the screed. To it is added 20 – 30 millimeters.

For reference. Installing beacons point for self-leveling floor is performed on the space in between the longitudinal and transverse rows exposed lighthouses, which should not exceed 1850 mm (to bear a rule with an overlap).

After that, as completed pouring dries, unscrew the screws required, because, otherwise, significantly deteriorate sound insulation properties of the equipped ties.

In all, considered in this article, cases before the filling between the wall and the screed is laid for future Damper tape for self-leveling floor, compensating thermal expansion.

Lighthouses, performed by the mortar brands

This option does not present any danger for the waterproofing layer. However, it is more marker, although it belongs to the category of point. A major shortcoming is considered beacons of their increased sensitivity to the careless movement of the master and his errors. mark, exposed solution, you can easily bring down to its solidification stage. Height deviations of a few millimeters to "catch" it is extremely difficult.

The technology consists of forming marks in sequential placement of the required number of heaps solution, consistency and composition of which are identical selected for the fill material. If you plan to fill using a polymer rovnitelya, the brand, more often, formed of plaster.

Said kind of beacons is widely used in the regeneration of leveling floors by wooden bases using solutions based on concrete.

Having taken for granted, that the necessary height of a future tie marked surface on the walls, proceed to install beacons.

The excess mixture is removed. Generally transferred to the next row. by 24 hours after their nomination, you can begin to fill. Before that, the surface is primed equipped mortar beacons.

For reference. If such beacons are placed on concrete, simplify the work and reduce the time of its execution allows pre-screwing screws, due to which the leveling. A handful are formed around them, height attain to the level of the head of the screw. After drying, the beacons can be turned out screws.

In theory, establish such self-leveling floors without beacons. But professional builders know, theory

It does not always coincide with the practice. therefore, Even in these cases,, they use special devices, allowing to provide leveling up to a tenth of a millimeter.

This special metal (option, plastic) beacons reperы, millimeter scale which is applied. Toward the bottom, they are fixed with screws. Area with a long-handled removes excess, or add a certain amount of rovnitelya. In this case, the master is focused on the gauge frame. At the end of filling them clean.

The main difference, which are like a beacon for self-leveling floor, It is, that they are not exposed dot, a linear roller, the upper surface of which outlines surface future screed. This method is already used for cement screed with a thickness of 3 cm. fastening method depends directly on the base material.

The use of such lighthouses dictates casting technology, to be executed stripes (between the two lines) alternately. On solidity is not reflected.

As set beacons filler under the floor in each case one decides, who carries out the fill. Variants exhibiting significantly more lighthouses, than those described in this Article. But that is enough, To fill yourself.

Videos about modern systems of installation of beacons