Many users want to know, What is a wireless charger for your phone and how easy it is to convert a regular phone into a wireless. The basis of the device is an induction current. For the system to work, required induction coil and coil-receiver in the cellular phone or other device. First included in the grid, second finding when close it creates a certain field, which resulted in the exposure and charge the battery. The basis of this method are the laws of physics. There are several standards, but they work on the same principle, the only difference in the frequency of Hertz, on which a device.

When the receiver enters the zone of action of the coil, special device captures it. the signal is transmitted, Charger included, that is, the field will be created not permanently, but only under two conditions - the coil is powered from the mains, receiver located at a short distance from it. The signal itself may be served mobile device and, for that he will use NFC after, as a non-contact charger for the phone device will be in the range of the.

The radius of the magnetic field generated by the coil is typically small, it is only up to 10mm, and the voltage - 5 Watt, which is the standard for such devices. It is enough to charge, but it is not capable of causing harm to others living beings. During the interaction with the charger is activated receiver coil, which directs the received energy in an eliminator, through which it is sent directly to have to charge the phone battery. Roughly speaking, the principle of operation of the wireless charging is to convert electric current into a magnetic field and vice versa, but elsewhere.

What is the function of wireless charging?

Modern mobile phones can already have a built-in coil, eg, This family includes Nokia Lumia, other models receive a special cover to connect the wireless charger. There is such an option of about 1500 rubles. You can find a Chinese analogue, it will cost much cheaper, if you buy wireless charging with Aliekspress. Chargers without wired systems can be used in any room or car, where the manufacturer has provided this function and set the desired coil in cars.

Many manufacturers produce special accessories, eg, musical car or home system may be equipped with a platform for charging mobile devices. There is also a car wireless charging. These adapters can be installed in any car, and they will work from the cigarette lighter socket or special, if any in the car provided.

There are several standards for wireless chargers, we now consider:

Many users are worried about, It does not cause harm to human health reel, manufacturers claim, that any influence on a human body does not have a battery charger, even if you are in the immediate vicinity. It is worth noting, that the electrical panel works on the same principle, It is in close proximity to the occupants of any apartment or house, thus any harm it causes no. Most wireless charging devices have the power, not exceeding 5 Watt, that too little, to work even on very sensitive equipment.

Advantages and disadvantages of technology

The main advantage, which have a wireless charger for smartphones, is the lack of wires, other than that it is universal for any phone model. This technology allows us to keep intact the mobile phone jack, they will not work loose from frequent use. You do not need to worry about buying the wired chargers, who constantly break.

Such a device can be applied everywhere, where there is a socket, Many modern cars already have factory grounds for charging phones. The store Ikea already selling table lamps with integrated inductive charging unit. many companies, such, how Samsung and Nokia, It has long been producing such devices and adapted to them phones with wireless charging. Charger itself has a long service life, It is much longer than usual. However, there are some disadvantages, which include the following:

How to make your smartphone wireless charging

Since this technology is relatively new charge, work only those phones can it, that it adapted, have a special coil and a rectifier. Many companies supply their new models such, but what to do, if the phone you are not new, a charge it would be desirable to remotely? To do this, you can alter the mobile phone with his hands, Wireless charging circuit is relatively simple and requires only inexpensive to purchase Chinese-ins.

receivers sold separately in the same way, as are the battery blocks, so you can buy and install a wireless charging on any smartphone with their own hands. Wide selection of sockets for any phone models with different connection will help in this. average cost 100- 150rub.

This small design, reminiscent of board width; small coil, analogue can be found in any store, something similar is used to prevent theft, gluing spiral on clothes. Mobile also uses a receiving coil. It can be placed under the lid and attach the battery directly, and may be located on and soldered to the connector for a conventional charger.

To protect the coils of conventional thin silicone cover will be enough, when using remote receiver. 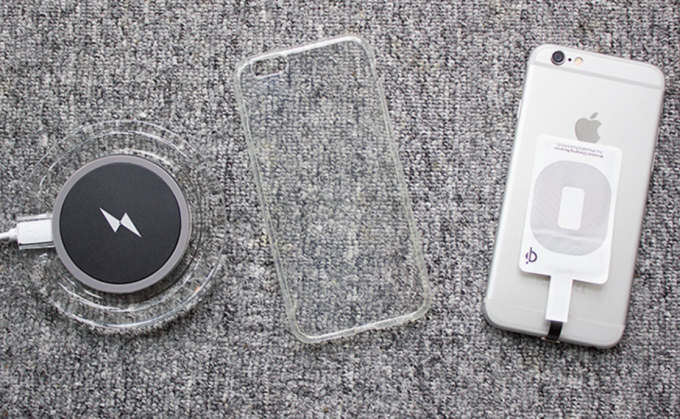 Choosing a contactless receiver, you need to pay attention to what, what brand of phone: eg, with the products of Samsung are no problems, and Apple smartphones are sufficiently selective to the charger and is likely to be operated only from the original. The solution may also be a universal wireless charging, Connecting with most smartphones.

Few words about the transmitter

It is important to look to the power supply was already more 2 BUT (2000 ma) better even greater loss since going. At a lower amperage charging is very slowly. For adequate operation need to replace the power cord that comes with the charger, because not every USB-wire can pass through itself full 2 BUT.

It is enough for the usual low-cost platform for low-cost smartphones for 350 rub. and the native power supply.

Himself ordered in this store transmitters (transmitter) Conventional single coil is enough to charge the battery with the Samsung phone on 2000 mA.

Who is gaining popularity with wireless chargers etc.upport fast charging:Qualcomm Quick Charge 2.0,Qualcomm Quick. For they already have to see the parameters that will potderzhivayu:

Quite a large number of companies offer wireless chargers for cell phones. Factory analogues better than the self-made models, that will be sure to work with your equipment, execution of their more accurate, and the phone will not be any harm from the inept actions of the owner, decided to pump your machine to a more modern model is much easier to order from Chinese friends all kinds trends of wireless devices.

The popularity of this type of chargers is growing, so the majority of well-known companies to organize their release. Each model has certain features, satisfies certain requirements of buyers, It is well suited to specific models of smartphones, for which they are designed. If we take a firm charging, then its brand should ideally coincide with the brand of your smartphone, so the likelihood, that the equipment will work properly, much higher. for example, Apple products are often in conflict with Chinese carvings and requires a connection to the original. The most popular manufacturers include the following firms:

In addition to well-known brands, It produced a sufficiently large number of Chinese zaryadchikov, they often do not have well-known names, but meet global standards, accepted for these purposes, there are quite cheaper options.

but, buying goods, eg, на Aliexpress, We need to pay attention to the seller's rating, in addition to look closely and to brand itself, OK, if it is at least a little known or someone before you already bought the device and left positive feedback. Usually, Russian consumers buy models, support wireless charging standard Qi, as it is the most popular in our country, and it is used by most manufacturers of smartphones and other portable devices.

When selecting memory you need to pay attention to the number of Hertz, from which they operate, and W. Some phone models, especially old enough, may be sensitive to electromagnetic fields, due to which the contactless memory use is not recommended. The phone may be damaged. for example, chargers Samsung devices are of high quality, so, usually, safe for all phones, manufacturer produces them only in accordance with the quality standards, Use only genuine spare parts.

One of the most popular zaryadok, made in Korea, It is a Wireless Charging Pad. It belongs to the family of the base of such devices, which is almost entirely devoid of drawbacks, who were present in the earlier generation of similar zaryadok. This model is convenient for the fact, it does not require any special way to place the phone on its site, his position does not play any role. It is quite convenient, You do not need to follow, as the mobile device is, if it has not moved.

This type of device is provided for the popular smartphone Samsung Galaxy S6, she works in a standard WPC. and then applies the positive side of the charging, that it can be applied not only to the Galaxy family, but also other model lines companies. A distinctive feature of this development is, and its ability to quickly charge the battery, eg, to improve the charge 50% it is possible for a very short time, faster, than a wired method, this is true, if the means of communication you need to urgently, and the battery had sat. Use this memory can be, and in those cases,, when the phone jack for normal block is broken or you do not want, to the room were extra wires.

If we compare the properties of the products of Samsung with Apple, worth noting, that most devices of this company such a method of charging is not supported, except for a few phones and one watches. Besides, Battery Apple's device will not be in contact with other brands of smartphones.

Conclusion: wireless charger for cell phone is quite convenient to use, used in cars, but it may have some disadvantages, in particular it is not suitable for use in older models of phones, and they need to be modernized.

But if you order in China, it is quite possible to keep up 500 rub. What if take advantage of cashback it will also save, so setting a time arranged in your browser, you can save on purchases up 8% .