the main / All Plumbing / heating / As obustroyat heating system in the house
Content:

Heating - one of the most important factors for comfort. And it becomes important infrastructure installations. Because you need to know how to arrange the heating system in the house, it does not make any mistakes and to achieve uniform heating radiators

The choice of heating system

First select a heating system, that you intend to use in their home.

The most common in the homes of a water heating system, which we consider. Create a project, which provides boiler, radiators, communications, temperature control devices and control the entire system. Calculate the required power of the system, based on the area and volume of the house premises. 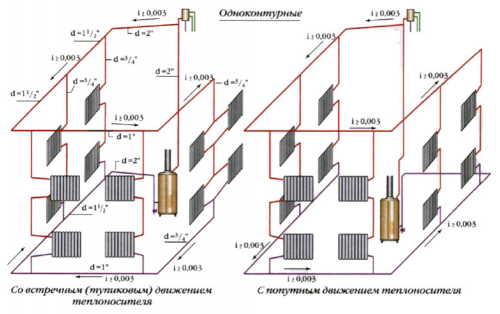 Also make a list of necessary materials, equipment and tools. Purchase all according to the list. Some tools can not buy, and rent.

You should also consider and features of the heating system, before proceeding with the installation.

Today it is possible to distinguish two major water heating group, This two-pipe and single-tube construction. In the case of the second embodiment, It should be noted, it is more cheap and easy. Pretty good solution would be the installation of the one-story house, but in the case of relatively large areas, in particular, and several floors, It will be most suitable for this two-pipe heating system.

First of all it is necessary to consider all the positive and negative features of such a battery warming system.

Even despite its higher cost, such systems can be found much more often, than monotube, because they are the most suitable for installation in buildings with several floors, as well as the structure of complex configuration.

It should be noted, that all necessary decisions on the arrangement of the heating should be taken even during the construction phase of the building. But at the same time allowed and the installation in already constructed buildings, though it is somewhat more difficult.

Two-pipe heating system got its name from the characteristic of a particular. In particular, it is a way to move the coolant. More specifically, after heating, coolant moves in one pipe to a radiator, and she goes with him and returned to the heating device for a different. It should be noted, however, that all the heaters are connected in parallel, which consequently makes it possible to independently regulate the temperature. 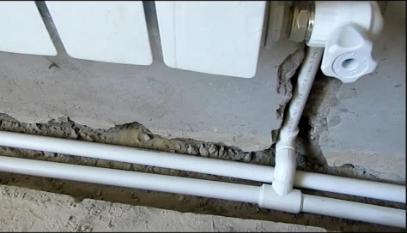 Speaking about the advantages of this design should note the following:

Considering the drawbacks directly, can not be overlooked:

Speaking about the varieties of a heating system, It should be noted, that its classification is similar to the one pipe, more specifically, such heating may be to equip the forced air circulation or natural, moreover have horizontal and vertical wiring.

Talking about the system with natural circulation, it should be noted that its operation takes place by heating, as a result of changes in the density of water.

In applying this system one can observe a number of disadvantages in addition, among them: 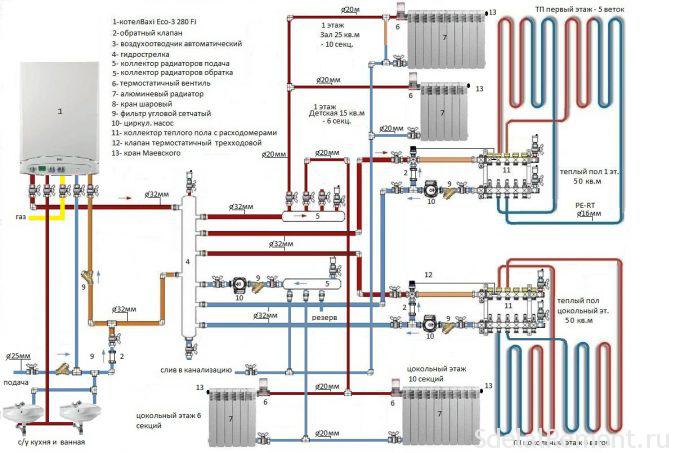 Among the features of this embodiment of the heating arrangement is the possibility to install a large-diameter pipe, as well as quite a high pressure, due to the difference of coolant supply and return water level. When installing the need to comply with the slope. In this case, there is a small flaw, in this situation, you may need an additional installation of the expansion tank, which is installed in the attic.

Speaking about the merits of, Of course it is the lack of electricity costs (pump, which constantly consumes 100 watt per hour) that for a month saves a decent budget. And especially, such a system will be relevant in areas with power outages.

For those, whose choice was two-pipe heating system with an upper wiring, probably of little interest to the, that all pipes will be placed under the ceiling. The arrangement of elements in this case involves installation of the windows of the feed pipe, while bachek installed directly under the ceiling. In implementing this decision should take into account the, that the circulation of coolant in this case may be somewhat reduced due to the reduced length of the riser. And besides, in each of the rooms will be equipped with a pipe.

Also of note, that at small distance from the window to the ceiling will have to make a cutout in the ceiling, thus insulate the upper part of the tank, for, that he still remained in the heated space. But perhaps the solution using an expansion tank.

In this case, the tank size will be somewhat larger, whereby the riser and a little bit longer. But it is necessary to take into account the, that the process water to take away not to introduce a system possible, due to the lack of the possibility of combining tanks.

Besides, it should be noted and reverse link assembly, which is also carried out under the ceiling, or near the floor, more productive. But it is necessary to take into account the, that the two-pipe heating system of a private house, scheme is shown below, not allow the use of connecting elements, because in this case it is practically impossible to avoid this drawback.

In this way, tubes, which is mounted above windows and the ceiling have a detrimental effect on the appearance of the premises. And besides, due to a ceiling lost a certain part of the heat, which must have been nearly improvement temperature. That is why sometimes used two-pipe heating system, diagram which represents a compound of the pipeline under radiators, but it eliminates all the shortcomings.

Also of note is the fact, that feeding the coolant rarely, or rather almost never occur airlocks, because quite a lot of pressure in the standpipe. It should be noted and the, that when incorporated into the pump circuit is allowed to use tubes of minimum sizes.

Vertical arrangement of two pipe routing in a two-story house

When, when settling two-pipe heating system is a two-storey house, namely vertical layout becomes more effective. This is because, because of the height of the radiator is greatly increased air circulation. This factor determines the flow of water to the distribution tank, located in the attic, then over an inclined coolant lines rapidly directed to the radiator.

In this variation,, unlike the previous allowed the connection of expansion tank. Besides, using charcoal or wood-fired boiler, achieved full autonomy and independence from the electricity. 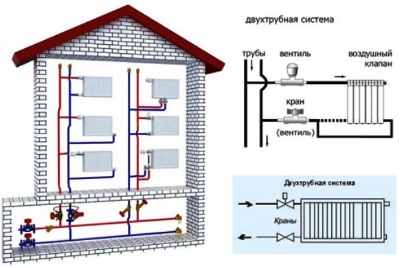 More successful variation becomes a combination of several systems, it is about, when using a one-pipe and two-pipe heating system together. In such a situation also remains the main advantage of the system - adjustable temperature control of individual rooms.

Also, you can consider another option, in particular, This pipe-laying in the form of "warm floor" system. Thus they not only will transfer heat to heating devices, but also additionally heated floors.

In this system there are also disadvantages, that you must specify:

Basically two-pipe heating system with the upper wiring is used due to its main advantages - a high circulation rate, at the same time they are completely absent airlocks. 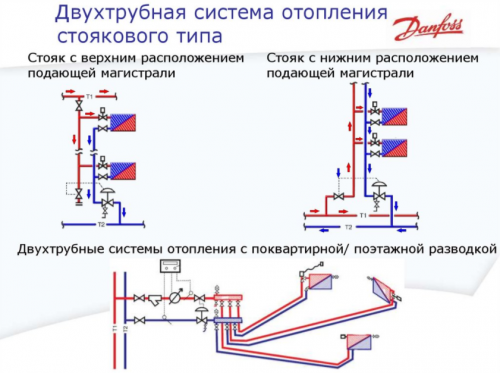 Also quite common is the use and two-pipe heating system with the bottom distributing. This design has several characteristic features, among which:

Considering the system, It should be noted, that its installation is carried out in the variation with natural circulation, and forced. Normally, the system settling in homes with poor cellar, as well as the flat roof.

note, that by using a lower wiring line mounted under radiators, or at the same level with them. The main negative factor is the relatively frequent occurrence of air cushions, hence the need for installation of cranes Majewski on each of the radiators. 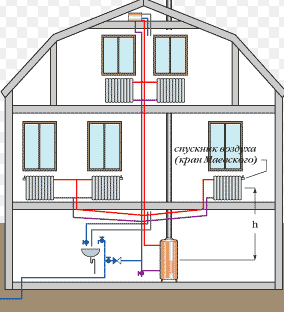 Among the advantages of such a system can be noted:

Among species of such a system may be mentioned parallel circuit with the collector or the placement of radiators. In the case of placing the collector, supplied to the radiator two conduits, in particular discharge and feed. In this case, all the rooms are heated a little bit better, but note, that the system is quite expensive, because it requires additional materials and pipe connecting structures.

Start the system installation by following the instructions, depending on the selected system. In our case - it is water heating.

Install radiator, using a hammer and the necessary accessories (fasteners). Typically, hardware comes with heating devices. Equip the room with warm floors, if it is provided by the project.

Calculate the number of separate tubes, adapters, tees, etc.. Heating device system. Make a detailed layout of all elements of the system with an indication of the scale. Draw the diagram, which will host communication. Note in this case the location of the electrical cables, to avoid damaging them by accident.

Before the introduction of the heating system by a bleed air system, unscrewing the tap until the water (while the air "plug" will be released from the system). Starting heating skilled charge, otherwise the boiler will be removed from the warranty.

After connecting the heating check all pipe joints and places of their connection to a radiator, to ensure the reliability of connections and their tightness. If necessary, turn off the system and remove the mounting defects.

When installing a two-pipe heating system should take into account a number of rules:

Besides, when installed in a two-pipe heating system reservoir, its installation should be carried out so, that the distance to any of the radiators was identical. Speaking of the pipe material, note, that he is chosen depending on the results of hydraulic calculations, as well as the wishes of the owner directly. Finally read the pictures prepositions how to choose the right radiator depending on the chosen system.

We also offer you to look, as a two-pipe heating system is mounted on the video: