the main / All electrics / LED in the home / Backlight stretch ceiling LED ribbon inside
Content:

Making repairs in the apartment or private home, People tend to create interesting and original interior. An important role in giving the room a special atmosphere and refinement plays a ceiling clearance. Very effectively looks stretch ceiling lights LED ribbon inside. In this combination, the LEDs are not only interior decoration, but also can serve as the primary source of illumination.

The advantages of LED lighting ceiling

For creating stretch ceiling backlit used in different types of lighting: LEDs, Rope cord, fluorescent lamps. However, the use for this purpose LED strip has a number of advantages: 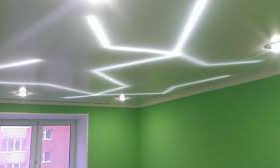 The main drawback is the price of LEDs. However, the reliability, they guarantee when used to illuminate the inside of a stretch ceiling, with more than compensates for this deficiency.

Use LED strip to decorate the ceiling when various designs in the nursery. The soft glow tape will allow baby, fearful darkness, sleep peacefully. A low power consumption will give parents the opportunity to leave the lights on all night, without fear for the family budget.

Variants of using a tape in ceiling lights

Setting LED backlight under stretch ceiling possible several basic ways. The choice depends on the original design idea landlords, as well as the height of the room, and that the distance, on which it is possible to reduce the lighting system device.

One-level stretch ceiling with LED lighting on the perimeter

One-level stretch ceiling with LED lighting on the perimeter - the most popular way to apply the tape. visually, it seems, that the ceiling soars in the air. The soft glow helps to tune in to the rest and creates an atmosphere of calm and comfort. The brightness of the backlight can be adjusted. LED strip is attached in a special ceiling moldings slightly below the ceiling, a stretched canvas is suitable for both high-gloss, and frosted. 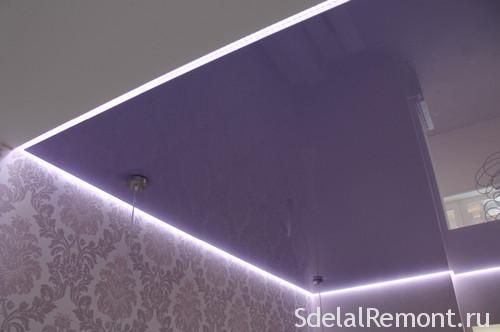 Stretch ceiling LED tape, laid inside, It allows you to create a unique light pattern. One flick of a switch you can turn the room into the hall for discos, light a starry sky or please the children images of heroes favorite cartoon. For the patterned illumination is necessary to use stretched canvas, transmissive light rays. Glossy film in this case is not suitable, since it is completely opaque. It is better to opt for matte paintings. 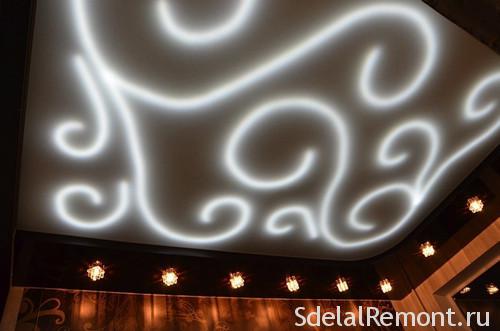 Backlight LED ribbon stretch ceiling is possible, and when you create a two-tier structures, a perimeter which is made of plasterboard. In this method, installing tape hides in the resulting box Papier. There you can place the power supply and other necessary equipment. not recommended to use a glossy stretched canvas: belt and all the accessories will be reflected in it, as in a mirror. 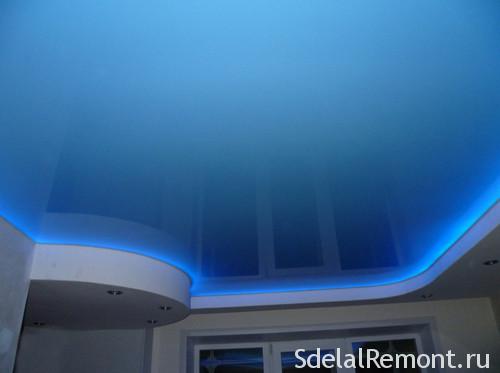 Another interesting way to install a suspended ceiling lighting is the use of a special translucent stretched canvas. produces it, eg, French company Clipso. Such webs have a lower, compared with fabric or PVC models, thick and transmit light well, which allows LED lighting to play the role of the main light in the room. Unfortunately, the ceiling of this type of cost is quite expensive.

Try to use in the design of the ceiling LED tapes of various kinds, different hue, number of LEDs per square meter. This will create in the room a few light areas and diversify the interior.

Installation of LED lighting under the suspended ceiling the strength to perform their own hands, even a person with minimal skills of construction work. It is necessary to draw a diagram of its location, calculate the required length, and buy power supply and mounting accessories.

nuances, that should be considered when installing:

To clean and degrease the ceiling, You do not have to buy special tools. It is perfect for this purpose a conventional soap solution and an alcohol.

Do not remove the adhesive tape surface once all the protective coating. exemption in 10-15 see step by step. Otherwise tape greatly complicate your job, sticking everywhere, where possible.

The use of LEDs in the ceiling constructions- It is a modern and unusual way of processing facilities. With a little imagination and knowledge of the characteristics of the installation will make the suspended ceiling with LED backlight main element of the interior.