the main / All electrics / Wiring / How to install and connect the spotlights right
Content:

Spot lights are directional radiation sources. The design is simplified spotlights, It is an enclosure with the front face, two latches and an electric chuck with outgoing wires. Sometimes design is complicated by the joints, intended to change the illumination direction. special lamps designed for the operation of such incandescent lamps with flattened bulb and reflector inside, and halogen lamps, they are enclosed in an additional housing made of glass.

Dimensions fixtures intended for the functioning of halogen lamps almost twice reduced. Validity halogen lam, usually, two to three times longer than ordinary bulbs action. But because of the huge proliferation of cheap counterfeit, it can be much shorter. Now the world industry began producing LED lamps, designed to replace those, other. plinth, the size and shape of the body of these lamps similar to incandescent bulbs obsolete, only within, in place of the tungsten filament positioned high-power LEDs. Energy efficiency and the term of the LED lamp just out of competition, and, seem to be, the future belongs to these light sources. And if you are for the "classic", then look how to install a chandelier their own hands. In order to understand how much you need the lamps in the room and a power use online calculator.

How to install spotlights

Spotlights are easily installed on a metal, Plasterboard, wood and plastic surfaces. In addition to the ceiling, they are mounted in the bathrooms and kitchen sets, in different elements of the interior design of plasterboard. The basic condition for a successful installation - the presence of the panel surface enough space. Halogen lamps require, least, sixty millimeters depth, and incandescent lamps - up to one hundred and twenty millimeters. It is at such a height, lower the tension, rack or plasterboard ceiling.

Install spotlights extremely simple, Installation is also simple scheme - the electrical wires are forwarding advance to certain places, yet-to-ceiling installation. After that, as a ceiling mounted, in him, in most of these pre-defined areas are cut or drilled holes of the desired diameter. Here rational solution would be the use of circular saws (crown), the photo below shows an example of. Next, wires are attached, and themselves lamps are inserted into the surface of the hole, a compressed information and the top clamps. When the latches are in the free space, They unclenched - all, luminaire is installed. 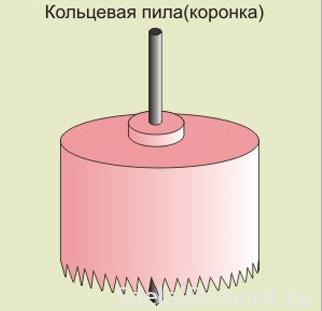 This is followed by the installation of electric light bulbs. If this simple incandescent bulbs with screw cap, they are simply screwed. If this halogen lamps, you must first install the plug-in connectors, after which the lamp is inserted and fixed in the fixtures by means of retaining rings, included in the set of fixtures.

For, to install a spotlight in a plastic or plasterboard ceiling, it is necessary to cut a hole of the corresponding diameter under it. The diameter of the hole for a spotlight is usually written on the packaging of the lamp., but it will not be superfluous to measure it once again.

The most common sizes of holes for spotlights are 75 mm 60 mm. Respectively, to cut a hole for a spotlight, need crowns for diameter 74-75 and 59-60 mm. Irregularities and distortions are acceptable, expanding the hole in some places on 3-5 mm.

If there are many lamps and they are separated from each other at a short distance (40 – 50 cm), then it is enough to lay a wire to the first of them. This is done before starting the installation of the ceiling.. Then, after installing the ceiling, the wire is pulled from point to point.

Which wire to choose? In terms of connection to plinths - stranded (more precisely, stranded) flexible. From the point of view of reliability and quality of installation - the same, as in all wiring. Usually it's tough (or soft) copper, for example VVG-3x1.5, ShVVP or PVS. 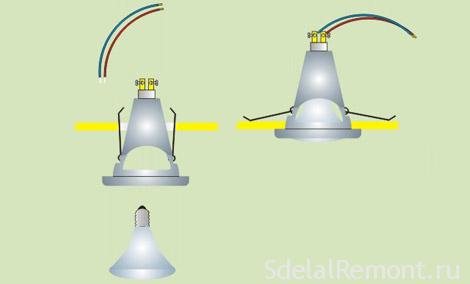 A job best done at the gloves of fabric. Touch with bare hands against the glass of halogen lamps, It leads to a premature loss of their efficiency.

How to connect the spotlights

When illuminated by large areas, point light sources, much inferior ceiling lights scattered light, but their energy efficiency is almost three times lower. When illuminated by narrow, long corridors improved energy efficiency, but only slightly. The question arises: If spotlights - is an integral part of the "renovation", how can then be a well-known European trend ubiquitous economy, and electricity, including? The thing is, that the original idea was to create a separate control of each such lamp. People, doing in the dark with some things, must turn on the lights only need them, specific area premises. it, of course, It leads to a rise in price setting, because the costs are much greater number of cables and complicated installation itself. Instead of a simple switch at the entrance to the room, set the controller - touch control panel, electronic switching devices, which are very often except for alternate switching from the remote control, It can be connected to a computer network and the subsequent implementation of the "smart home" concept.

The theme of energy savings due to its cheapness is not so acute in Russia. And the cost of repair is very relevant topic due to lack of spare cash. And so the spotlights connected loop - in parallel, and, respectively, includes all time. When a lot of them are divided into two parts and through a double switch included separately. See Related how to set the switch correctly in this article. When connected in parallel, loop two wires are feeding, and the third - grounded luminaire.

Especially for site renovated apartment with his hands.