the main / All the repair / Window / How to insulate wooden windows Soviet-made
Content:

If the apartment has old wooden windows Soviet-made, One winter escape podduvany cold air from the street and the formation of ice on the windows. The thing is, that old windows are not sealed.
Due to the cracks of the wooden profile formed in them large enough gap, through which inflow occurs and ice outside air. He, in turn, cools the window, which leads to the formation of condensate, and accordingly ice and puddles on the windowsill.

To get rid of such unpleasant phenomena requires insulation of wooden windows in the autumn-winter period.
Insulate the windows can be a variety of ways, discussed below are the main ones.

The joints are sealed between the window profile putty, that consistency similar to clay, except that a little bit harder. Smeared and seats, where the glass adjacent to the window frame. This method of insulation of wooden windows for many years, it was used even our grandparents. However, he is also relevant. 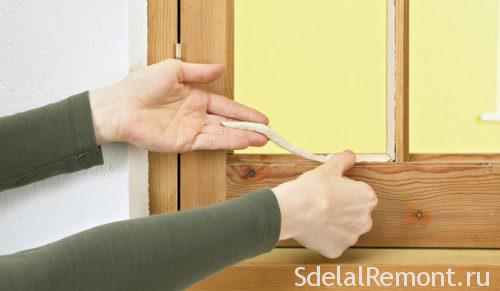 Putty can be purchased at thrift stores or construction materials. And it is possible to manufacture and independently, mixing powder of chalk and linseed oil in a proportion of 4 to 1. But easier to buy, Yes, and cheaper to get.

The disadvantages of using a putty can be attributed absolute unsightly - the windows will look, to put it mildly, not the best. Besides, putty should be changed every season.

But there are advantages - using putty effective and cheapest way of warming. It is available to everyone.

Window tape which acts as a putty, ie temporarily closes the existing gap, not allowing the cold air to penetrate. However, this method is much less effective, since the adhesive tape has a virtually zero rate of thermal insulation. therefore, if you decide to insulate the windows with tape, the pre-slit hammer wool, hemp or other similar material. And only then stick tape. This insulation will more efficiently.

Plus, only one - the low cost price, necessary materials will cost quite cheap. In putties and adhesive tape and has a common drawback - if you plug the gap between the closed doors, then open them for ventilation no longer work.

The seal is a thin round rubber profile, rectangular or any other form.
On one side it has an adhesive surface, which is closed by a film. For thermal insulation of a wooden window it is necessary to remove the film and glue sealant around the perimeter of the flaps (better and on the perimeter of the window frame, If the window design allows). When you close the rubber flaps will compress, closing the gap between the sash and the window frame. 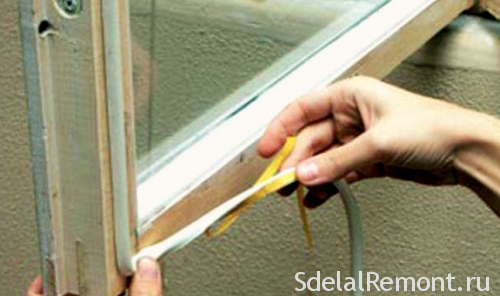 Before bonding the surface of the wood must be washed with a soap solution and degreased with acetone or alcohol better.

Properly taped seal lasts long enough (3-4 of the year). I.e, it does not need to be changed annually, plus it allows you to open the sash for airing.

Embedded rubber seal does not stick to the surface of the window, and inserted into a pre-made groove.
Paz also milled around the perimeter of the flaps and / or window frame. In the slot before inserting the seal is recommended to add silicone sealant. Since the seal is better to stay away, and the possible cold bridges.

The advantage of mortise seal is, it is much longer Bonded.
If you install a good quality of rubber, it can not be changed 7-8 years old.

However, it is very difficult to establish, especially to do a smooth groove cutter. If you are not confident in their abilities, it is better to order insulation of windows on the Swedish technology the professionals. Otherwise, you run the risk of ruin window.

note, that the insulation of windows using the seal does not save you from cracks between the glass and the frame. Of them will continue to penetrate the cold air. Therefore it is necessary to insulate the windows separately using putty, adhesive tape or glue (about him will be written below). 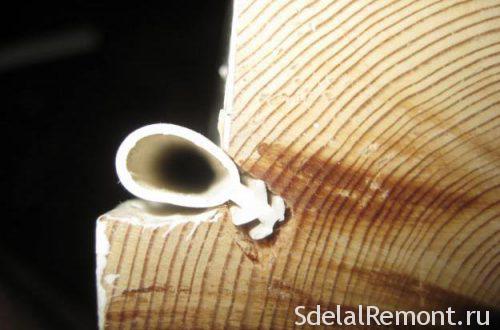 Glass on old wooden windows Soviet-made, usually, not flush against the window frame, which leads to the penetration of cold air gap existing.

Luckily, to fix this problem is quite simple, need to:

After drying, the sealant closes the gap between the glass and wood frame.

Bonding glass sealant and rubber seal installation will make the window much warmer and save you from blowing. This combination is best to insulate wooden windows Soviet model. 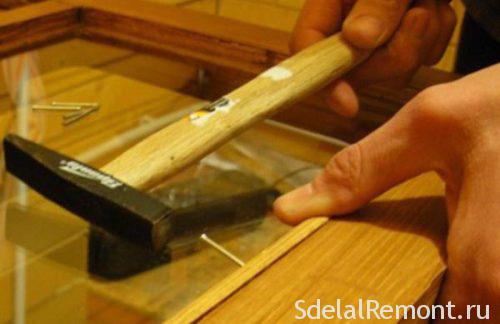 Remove the glazing beads without breaking them is difficult, as they typically are in poor condition and deformed even at low load.
But it's not scary, because you can buy ready-made beadings in the hardware store for mere pennies.
Cut them the right length, paint and nail is not difficult.