the main / All Plumbing / Toilet / Condensation on toilet tank - Causes and Remedies
Content:

Enough common in residential buildings is condensation on the tank of the toilet bowl. Some apartment owners are absolutely indifferent to this, but for others it brings discomfort and fears of flooding. If there is condensation on the tank of the toilet bowl, what to do if you need to? he does not bear a great threat, concern are the pools themselves, which are formed on the floor. Wipe a little some water is not difficult, but if you do not do this permanently, it can lead to the appearance of mold and unpleasant odors. If you do not deal with this issue at all, then in the future, this phenomenon can cause flooding neighbors. 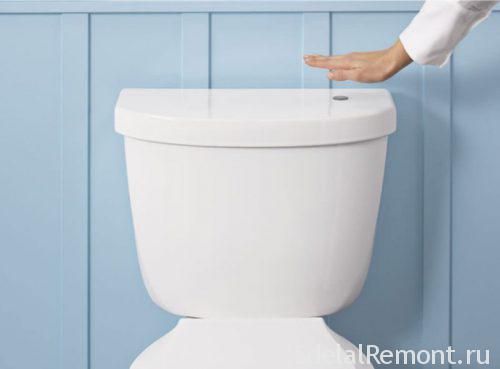 Before you remove the condensate from the toilet tank, you need to find out its true cause. If it does not reveal, it will appear again and again.

All causes of condensate can be divided into several groups, namely:

If all the devices and systems are in good condition, the only reason, which can cause the water droplets to become toilet tank temperature differences. A striking example of this state serves cold season. If there is a problem of wet pipe read here, how to get rid of condensation on tubes.

Since the house is warm, and it's cold outside, and the water is supplied from a low temperature water supply system. As a result, water droplets are formed on the container.

Since the cold water is the main cause of condensation, the output is a simple and convenient way, this the use of the thermostat, which at a cost of 1000 rub. It allows to mix hot and cold water.

The consequences of accumulation of condensate

If the bathroom is used high quality plumbing, as a result of condensation can not be afraid of corrosion and its consequences. But to be absolutely sure of the reliability of the tank and the toilet can only be the manufacturer. That is why you need to pay attention, and to take measures against corrosion processes. It's good for security, and in the case of prevention of negative consequences.

If only high quality materials were used for the production of sanitary ware, that great attention should be paid is not the entire device, but only the metal parts of its attachment to the surface. Since condensation droplets can get on bolts, the corrosion in such cases is inevitable. In order to prevent the negative effects of, optimum corrosion protection options will grease.

There is also the likelihood of dripping droplets on the walls to the floor, where clean puddle would be extremely inconvenient, and at worst impossible. Such a situation can threaten additional evaporation, that is, it will be a new source of moisture, as well as the accumulation of fluid on the floor lead to the development of fungal infection.

Before eliminate condensation on the toilet tank, It should be addressed by the same reason for its appearance.

When the leading factor is the high humidity, it requires particular attention Breather. In this way, the ventilation system must be in good condition, despite the opinions and decisions of many residents, eg, it spoils the view, It does not fit into the interior, etc.. If the reason for their failure is a bad craving, then the solution of this situation will make the purchase of mechanical ventilation. In the construction market there are many varieties of it, which may be different power rating, device and appearance. 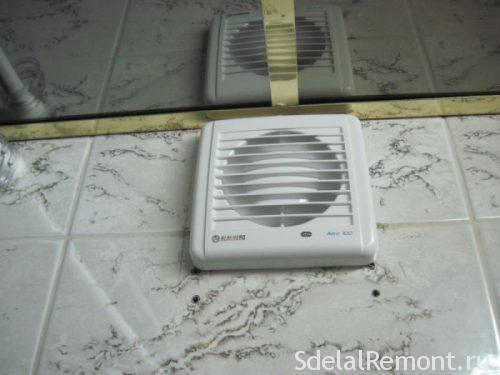 When in elucidating the causes of, why condensation forms on the tank of the toilet bowl, performs fault cistern, then the need to address its failure or complete replacement. When there is a constant flow of water into the toilet bowl, then in the end it leads to large costs not control fluid. It is not economically viable, particularly when water meters are installed. Very often find damaged parts is very difficult, or they are not suitable, then the best option would be to address the second embodiment.

You need to configure the drain. Before attempting to establish its, container must be cleaned of lime, which is in the area of ​​technological holes, and it is obligatory to replace the seals. That during replacement to avoid mistakes, the plastic nut is desirable to wrap his arms, but firmly, because the tools can damage them. The keys should be used when tightening the mounting. 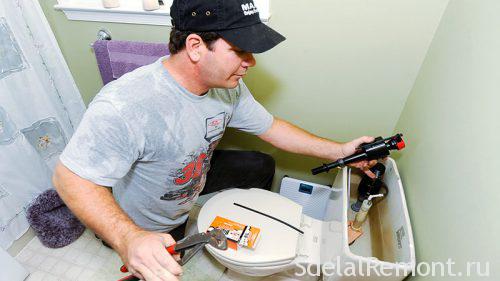 If it is going to the condensate tank to the toilet bowl, the influence it by changing the volume of water drained. A great solution would be half the shutter button or the use of double-clicking the flushing key options. If this solution is not acceptable for an existing toilet system, and then we can think about its replacement by a more modern model.

Before buying toilets should be familiar with different models. To date, there is a unique model, which thanks to its original device prevents the likelihood, that condensation on the toilet tank. The main feature of this plumbing - is the presence of double-wall cistern. It is arranged in such a way, that the water gets a special container, that is so, between it and the wall of the reservoir has a layer of air. Here outside it's no noticeable, but the result of this stunning innovation and condensate in such cases is unacceptable. 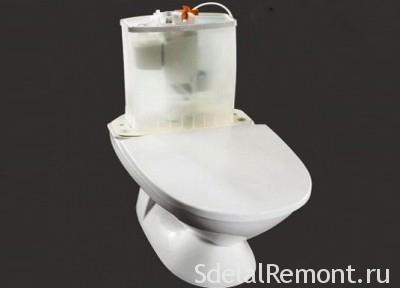 Another option for solving problems with the appearance of liquid droplets in the plumbing is to replace ceramic cisterns on plastic. Since this material is capable of flowing heat faster, and so the water heats up quickly. Despite this solve the problem of condensation in this way completely fail, it will be only a temporary security measure.

In this way, solve problems with undesirable appearance of the water droplets possibly by different methods, but the main thing in this to find out the true reason, why it is going to the condensate tank to the toilet bowl.