the main / All the repair / Ceiling / Why the ceiling plasterboard cracks appear
Content:

From cracks in the plasterboard ceiling no one is safe, more often they appear in the joints of slabs and suffers all the appearance of design. Even experienced craftsmen can not give an absolute guarantee, that after the establishment of the ceiling plasterboard will not occur over time cracks. And the question here is not the skill of the construction team, but due to the presence of multiple co-factors.

It is necessary to consider the matter more thoroughly, because every crack in the ceiling of plasterboard causes significant anxiety from the owners. The question arises: What to do, how to fix this problem? The first thing to determine the cause of their appearance.

There are cracks in the plasterboard ceiling for entirely different reasons. Among the most common are the following.

The most frequent and common cause of cracks in the ceiling of the structure can be drawdown. Unfortunately, here man is powerless, because this process does not stop the power of anyone, you just need to wait for its completion and do not rush to erect drywall construction in the "new" building.

Any professional will tell, that in this situation to blame for the incorrect installation products. The most common problem occurs in large areas, where the installation sheet held in a sheet, without using the offset seam. Then, even if the structure of the small vibrations may crack across the seam. for example, when driving on the road near the house of a massive technology.

Usually, installation, made with dowels and going in a set with two screws, can not withstand a lot of weight. Gradually, the hosts begin to notice, that there are cracks in the ceiling with drywall. The bottom line is, that the diameter of the screw in relation to the dowel diameter is too small and the walls of the dowels are mounted very poor in hole. As a result, there is formed a crack and sagged. It should be used in addition to the suspensions even and hard mounting to the ceiling.

No less common problem becomes forgetful masters or omissions of independent work. In that case, when before you start step putty man forgot to walk primer. Almost ninety percent of cases occur cracks due to non-compliance with ventilation and humidity room during repair work. Sheets gaining moisture and then dry.

The main rule of each layer must be dry and then the following milestones.

The main causes identified, you can proceed to the second stage of the study question -methods correction and prevention of recurrence of cracks.

The main violation of the technology in the pursuit of material savings is the fact that according to the standards of Knauf ceiling used 2 layer sheets of plasterboard. Profile Mounting is carried out not plastic dowels with nails and metal or using air gun for fastening profile. Another important advice for the Masters can be found in the article about secrets with pofilem.

Elimination of defects in the ceiling

The question is how to remove cracks in the ceiling plasterboardx a very important and requires special attention.

What you need, to cement the cracks?

For, to know, than patch up the cracks in the ceiling plasterboard, you must have a set of building materials and master the technique to eliminate cracks.

Now, can proceed directly to plugging cracks in the gypsum structure.

Repairs begin with the closing of cracks. Her expand on 5-10 mm. Purified from fillers. From each edge of the painted surface and removed carried closing its mesh. Apply a new layer putties, processed primer. After this work is carried out luting surface of a wide spatula, well distributed throughout the structure of the ceiling. When all withered, should again apply putty, in order to eliminate minor voids. Next primed plasterboard ceiling and painted in the color you want. 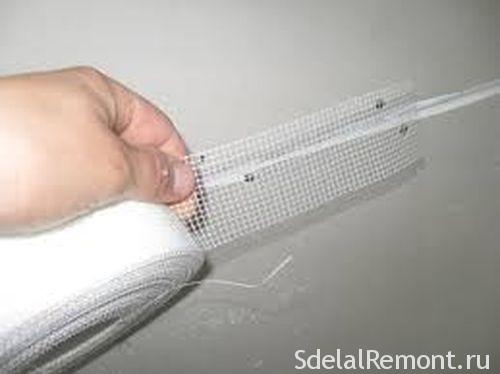 If it is not a pure white ceiling, then you need to be prepared for full repainted the entire surface. The fact, that if the paint only a place of repair, After drying the paint may differ from the tread and the general background. To do this, the entire ceiling putty, paint and then painted design will look as a whole.

When the house leaks often occur, it will be easier and cheaper to install the suspended ceiling, and then crack on the ceiling will not bother you. So that, mounting a plasterboard structure, you need to foresee the nuances of space functionality, so as not to deal with common problems to eliminate defects in the ceiling cloth.

Attention: in order to deal with fewer problems of cracks in the plasterboard ceiling does not need to save money on material and expertise! Be careful in this regard and do not pay twice!