the main / Floor / Floor coverings / Tile / marking technology, and laying tile on the floor on the diagonal
Content:

Distinguished only two ways to tile layout, and the most difficult is the laying of tiles on the diagonal. But even taking into account the complexity of the implementation of such an option of laying is widespread. In particular, the peak of its popularity way to reach due to its unique ability to increase the space. But in order, in order to properly perform the stacking floor diagonally you need to know all the features of starting markup, and ending with the removal of excess grout.

base marking and preparation for laying

The main mistake, that allow novice professionals, as well as those, who decided on their own to make repairs - a wrong choice of a benchmark. In particular, to determine the direction diagonal bounces, but note, that it is not always accurate, and is not an indicator of the direction, which necessarily requires. This approach, of course, not spoil quality of the coating, but inapplicable affect the appearance. Upon completion of the works, going in space, you can see the unevenly paved diamonds tiles.

Of course, in some cases this is not noticeable. But still very influenced by the appearance of. A culprit that becomes incorrect laying angle. As known, tiles should be laid at an angle of 45 degrees. But do not forget, that this angle may be diagonally, Only when it comes to a square room. In other cases,, angle will be either larger, or less, which causes irregularities.

For, the tile has been properly laid, you must not beat diagonal, and the bisector of the angle. Or, construct an isosceles triangle on the floor. For, to carry out such construction, should be postponed on the angle of each side wall segments of equal distance, preferably in accordance with the size of the tiles diagonally. This will begin to spread surface seamless tile, instead of slices. 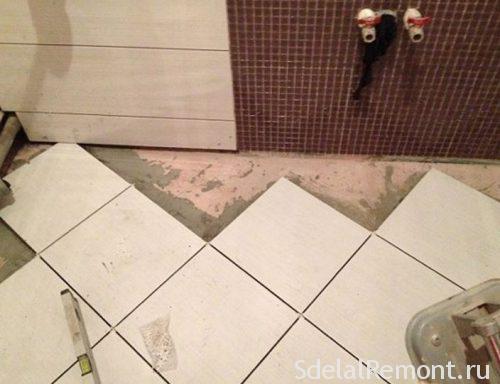 follows, it should be noted, It becomes surface preparation. It's simple, The minimum requirements, in particular the lack of moisture and debris, surface leveling, and it will provide the best possible coverage. 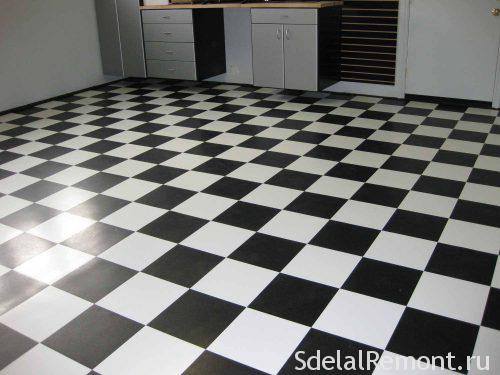 Briefly mentioned the main, and now consider themselves as carried tile laying diagonally on the floor. In particular, analyze a visual guide, which can be used now. It should be noted at once, that is suitable for both manual laying on the floor, and for wall.

As I mentioned earlier, the first thing is held marking the floor surface. It is performed using a mark equal intervals of the angle, which in future will determine the direction of stacking. At the end point of each segment is desirable to drive the dowel, and then pull the thread, which will serve as a guide.

follows, Work becomes an obligatory stage primed floor surface. If this process is to overlook, then you run the risk of eventually spoil and does result, respectively, and the tiles, as well as to transfer construction materials, which would entail extra financial costs.

The primer is applied with a brush, roller or spray, depending on its type. Upon completion of the surface should be allowed to dry out, at least a few hours.

After that, as you primed surface of a standard primer. In the case of irregularities subfloor must be done prior to the alignment procedure using an adhesive. Since the laying of tiles on a diagonal to the floor is not for one year, then additional measures are needed, to increase the quality of work.

To carry out this type of work she should be diluted adhesive for tiles, at the same time it is necessary to make a rare. After that, they oshpaklevyvaem floor surface. Such a process is provided for complete pore elimination on the surface, pits, cracks and other defects. Wherein, immediately after application, you can start working. It is desirable only to wait until the adhesive mixture grab (but not necessarily).

Now it's time to lay the tile directly. First of all you need to follow the instructions to dissolve the adhesive mixture, after which the arm with a serrated trowel and forth: 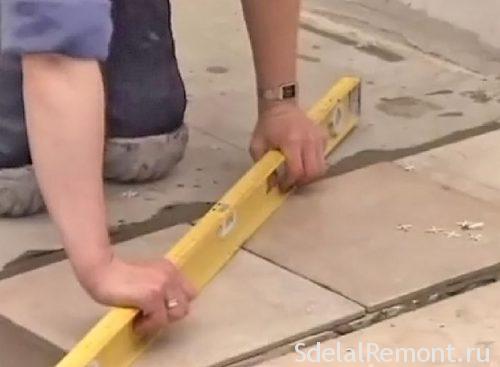 And in the end, after drying cells 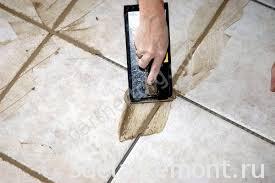 Her conducted grouting. The process itself is simple but crucial:

It is important to carry out the work carefully and slowly, because the grout dries quickly, then it is impossible to eliminate any errors. It is also important to eliminate excess material from the surface of the tile to complete the work on each 2 square meters tiles, that is carried out with a dry cloth.

Finally, we give a little advice on the calculation of the number of tiles for laying diagonally. Here everything is quite simple, We calculate the area of ​​a room and add 1-% obtained from the number. For the convenience of calculations we suggest using a calculator:

On this question of how to put the tiles on the floor on the diagonal can be considered closed. In addition we offer watch a few videos about, how to carry out laying on the diagonal, how to perform the layout and other issues, the answers to which you need to know