the main / All the repair / Window / freeze shutters: what to do, how to repair
Content:

To date, blinds or shutters are considered one of the most popular ways to protect window and door openings residential premises. Most often, they are installed in offices, shops, kiosks and shopping centers, in garages and on balconies. Affordable price of the system and its ease of use have led to significant demand for blinds, but, Besides the advantages in the use and they have a small negative. Special, in winter, when due to heavy frost freeze shutters, and to, to be open, every time we have to spend some time.

If the room, you are protected by roller shutters, freeze shutters, should not only take the appropriate measures to bring them back to a healthy state. It is desirable to make the design of such, that no frosts were not afraid of her.

The problem with freezing

In the summer and in the off-season only problem could be the opening of shutters of their pollution. While in winter due to the large temperature difference between the room and the street there are problems with freezing frost shutters. On their surface occurs condensation, which the, cooled, It is converted into a layer of ice and does not allow moving web. Shutters can freeze and after precipitation during the day and the ensuing night frosts. 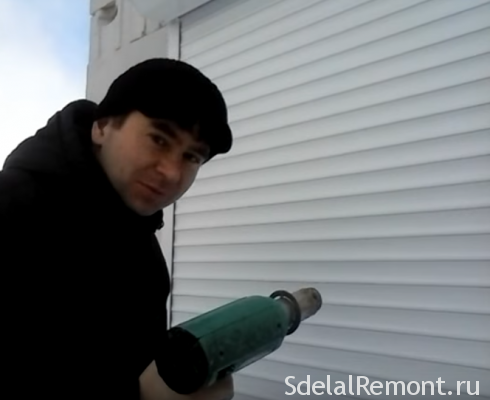 Unlike other window protection options and door shutters require special treatment to unfreeze. AND, If you have frozen the lock on the shutters, watered it with boiling water as conventional keyhole and hinges, Not recommended. Too chill parts shutters, you can easily disable them. If the water is not sufficiently hot, it can quickly cool down and further complicate the situation.

There is a reliable method of release is not open due to frost shutters. Lightly tapping the slat surface, which consist of shutters, You can crumble and to release the frozen ice structure. The system will open - in this case will not be damaged neither the shutters, nor even their decorative coating.

There may be situations, when the shutters are already open, and the frozen lock does not allow them to close. If the ice is formed inside the keyhole, it is desirable to remove the defrosting means via a specially shaped tip. To this end, suitable, eg, any car defroster for locks. In any case it is better to call professionals to quickly produce roller shutters repair.

To defrost the shutters had as little as possible, should provide special variants of their installation. So, Shutters large, used for garage doors, can, setting design box indoors. In this way, the guide is always in relatively warm conditions and do not freeze. Besides, for large structures, opening automatic way, use web from a foam thickness before filling 10 mm. This eliminates freezing and condensation. 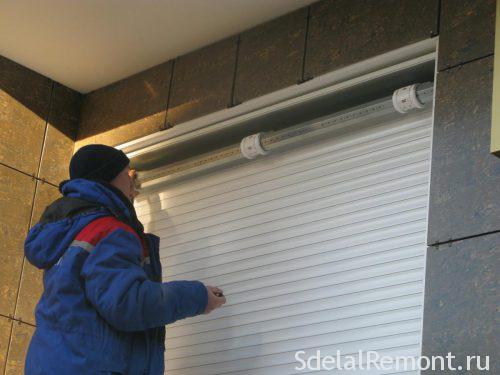 Another variant of the answer to the question, what to do, so as not to freeze shutters, It is the replacement design (preferably at the design stage, when the blinds are not worth more) at least subject to glaciation system. for example, on sliding doors, when it comes to the garage or other dimensional room. Or ordinary shutters. Such variations are less convenient in operation, but, more profitable for the price.

If resources permit, When installing roller shutters should provide for the installation of additional structures: 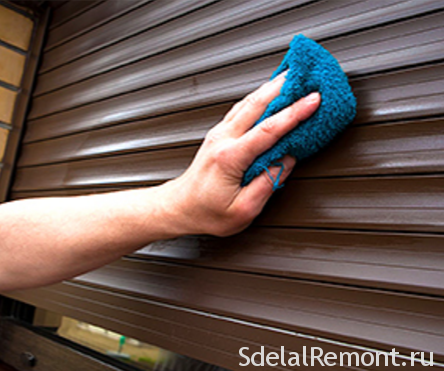 Besides, owner of premises, protected shutters, should take into account weather conditions and, opening them manually, do not make a serious effort - trying to open the blinds to remove frozen ice, It may damage the lamellae. And to automatically open doors and windows, it is desirable to put a special "smart" engine, supervising the process of opening of shutters and stop it when you have problems with freezing, or for other reasons, because of which the blade remains stationary, This prevents damage to the shutters and fixing automatic lifting system.

the, who do not want every winter thinking about, how to open a frozen shutters, beat with parts ice particles and to fill in the frozen lock defroster, should turn to professionals. This will ensure both long service life design, and her work in any conditions, including rain and severe frosts. BUT, if you have previously installed blinds still out of order due to frost, the same experts will provide repair and roller shutters, including retrofitting, replacement parts and automatic adjustment.