the main / All electrics / Wiring / How to install and connect online outlet, TV outlet and telephone
Content: 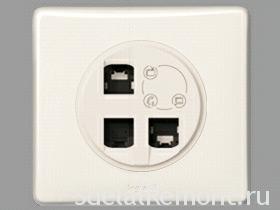 Virtually all manufacturers of electrical installation systems (These include the production of switches and electrical outlets), engaged, in turn,, and even the release of other networking products:

Today we'll talk about how, how to install and connect online outlet, TV outlet and telephone.

The nuances of installation

Basically, the design of all products from the same series should be in accordance with each other - it is intended for, the buyer was able to be maintained in the integrity of its interior design ideas. That is why decided to choose a whole series of these products.

As for the installation of sockets, that in this respect we can say, that network, TV and telephone sockets are mounted identical, ie a similar way. Assembly rosettes Though similar, but still worth knowing some details for each of them:

Enclosures are used here are the same, as in the embodiment with electrical outlets and switches.

How to connect and install the online outlet

Let's start looking at all the stages:

How to connect and install a phone jack

Almost exactly the same, but even more simply connect telephone sockets. Terminal outlets such consists of only four special connections. therefore, requires two wires of the telephone cable to connect with your contacts 2 and 3 (Wire color - red and green).

How to connect and install a TV outlet (TV)

As for the connection of television (TV) sockets, then first you need to know, that they are of three types:

And outlet end communicating commonly used in the case, If you need to install several TV outlets, not using the additional separation device. Plus such outlets is:

Yet in this type of outlet has its drawbacks:

This device has input leads and an adapter. There is one input and multiple outputs. The adapter you need to connect to the network 220 AT, input cable to send directly to the input, and output to the outputs and on to the outlet.

On any TV outlet with its rear part must be a screw terminal contact, usually it is located in the center. It is necessary to connect the TV cable center conductor. a screen shield must be fixed with the help of special brackets.

But it is necessary to take into account, if you are working with passage outlets, these central contact will be two, as well as two brackets for fixing.

To connect the cable, must: 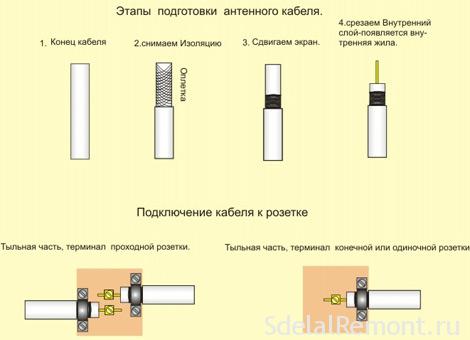 Now you can easily connect and establish their own television outlet. Stay tuned to the site apartment repair their own hands.
Also worth a look at our selection of videos on installing outlets: