the main / All the repair / Window / Stained Glass in the interior
Content:

Stained glass in the interior always look attractive, add design of status, originality. Previously stained glass were available just enough rich people, currently possible to create stained glass and with his own hands, since there were modern materials and technologies, allowing it to do without the use of sophisticated tools and the availability of skills.

Originally stained glass collected from small glass pieces, remaining after the creation of a solid product. Between them they were held together with metal strips. Such glass They used not only as a decoration, but also as a product, the ability to close the desired area. It was connected with the inability to make a product of the right size.

Italian masters used as glass transparent minerals, then they were coated, eg, alebastrom. This is to protect the room from the sun, creating a shadow. Later, there were red, yellow and blue glass, of which can be folded intricate pattern. Stained Glass valued dearly, served as an ornament of rich houses and cathedrals.

How to create a modern stained-glass windows?

Modern stained glass windows are made completely by other technologies. They can be produced in the factory, or do fans with their hands. glass of different colors are used to create the classic stained-glass window. Similarly, based on sketches by drawing cut, then bonded portion by using the H-shaped profile from a lead.

Such designs are thick and bright contours, which are well highlighted line. The appearance of the stained glass is familiar: they can be found in the Old Cathedral. AT modern interior such constructs can be used not only for the exterior glass, but also for the decoration of interior partitions and doors. Very popular minimalist style.

Stained glass window in the interior is often used for manufactured typesetting technology. These are called Tiffany stained glass, they appeared in the US in the XIX century. Details are also carved on the design of the desired color on the glass, connection occurs by means of soldering and copper foil tape special, that the glass around the perimeter obvorachivayut. The result is integrally, which can be used as stained glass.

The technology allows the use of not only traditional glass, but also textured surfaces, elements are not standard form, eg, convex. Such decorations can be created, if desired, independently. They often make out the window, interior partitions, fixtures, ceiling.

Fusing is a modern technology, applicable to the creation of stained glass. In the 90s it was invented in Germany. The main feature is the method of connecting the fragments: they are not drunkards, and sintered, using a high temperature. To do this, the details need to put on a flat surface, then heated until, until the glass becomes soft and fragments will not soldered to each other. When the elements are firmly connected, it is allowed to cool.

stained-glass window, created by this technology, It has no visible seams of metal, on fashionable, often used for interior decoration. The boundaries between the elements are not evident, colors have a smooth transition to each other. Stained glass looks like a one-piece, slightly blurred picture. Such designs are suitable for rooms with high humidity, because it does not contain the elements, oxidizable. Besides, They are suitable for use in display cases and windows, since the connection portions vitrage dense and hermetic. This technology is used to create and fixtures, decorative elements, decorations of various furniture.

A method of creating a large composition of several elements

Modern stained may be a large composition, establish that in the past it was impossible to. The technique resembles fusing, because it involves the use of metal loops. Details spread on a special substrate of glass, Stir the material in special cells, whereupon the mold is heated, occurs and its liquid filling material, which firmly sintered with the metal elements. For greater strength and achieve an attractive appearance metallic contours are made convex. Externally, such a stained sufficiently similar to the ancient. 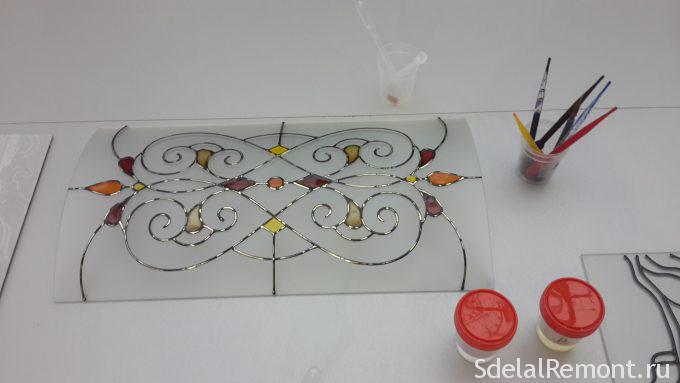 There is another way to prefabricated large stained-glass windows. For this purpose, clear glass, is specially etched. So you can get almost any image on the glass the desired area. To obtain the desired color in the glass field, where there should be drawing, is treated with hydrofluoric acid. The image comes out matte. If this glass to illuminate an end, matt areas will glow from within, creating a magnificent view and bringing in design originality.

There is another option to create a pattern - sandblasting. It is less attractive in appearance, than etching, but it is simpler to implement and cheaper. Its essence, that sand jet knock topsheet glass, creating a matte surface. Most often, stained glass windows created in this way are used for the decoration of interior doors and partitions, They can be used in kitchens and bathrooms, where there is high humidity.

Glass, converted into film stained using, It becomes stronger, such glass when broken its fragments remain hanging on the film and will not fall onto the floor.

To create a drawing first need to make a sketch on paper, then the film is cut ready elements. The films produced colored, on this you can choose any colors, are popular and can blend in with your décor. Cut parts accurately applied to the glass, then encircle special circuit, which can be bought in shops for artists. Such stained dislikes moisture, direct sunlight, so use it better in dry and warm rooms. It is perfectly in harmony with the furniture, a variety of home furnishings, suited to modern and classic style of the room.

Where will look stained?

Best of all such elements are suitable for interiors, decorated in a bohemian style. This style is characterized by the classic stained glass with a copper frame.

If the interior is designed in a Scandinavian or Eastern style, eg, Japanese, more relevant use of stained glass, obtained by means of sandblasting. In virtually any room will look favorably on the stained-glass ceiling.

Stained-glass windows - the perfect solution for almost any interior. They attach to your style and personality of the high cost of, emphasize originality, can decorate a room, having placed the necessary emphasis.