the main / All the repair / Walls / What to do after the plaster walls
Content:

The answer to the question of, what to do after the plaster walls, It depends on, how it is planned to finish the room. There are several options: painting, paperhanging, Floor tiles and the creation of structures of plasterboard. In the first three cases, need to ensure that, to furnish the material is securely held on the wall, in the latter - only that it is important to, to metal profiles for gypsum board are securely fixed.

Preparation of the plastered walls to putty

Drying Period plaster is not less 1 of the month, in recommended not to touch the wall during this time. the, how quickly the treatment of walls after plastering can be started, It depends on many factors, in particular, the temperature and the humidity in the room, its ventilation. To accelerate the drying process it is recommended to provide a through flow of air through the room, throwing open the windows and doors. 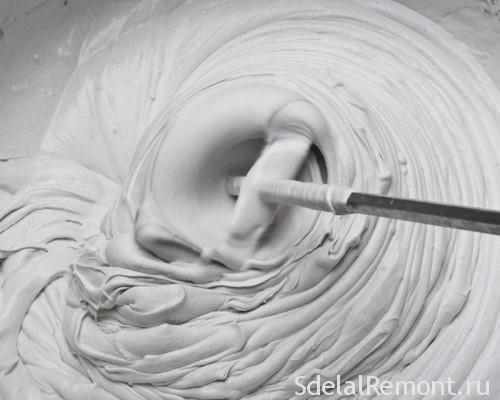 Important, wherein the temperature does not fall substantially below room level, otherwise there will be problems with moisture evaporation. It should also not too exceed the room, otherwise it will lead to cracking of the coating.

choosing, than treating the walls after plaster, should stay on the dirt road. With its help, you can extend the life of the plastered surface, achieve better performance of its, including water resistance. Significant improvement in the adhesion of the material is ensured by the fact, that coats its surface is impregnated deep enough and strengthen the surface.

The choice of fillings for the walls after plastering

While the primer dries, to choose, than putty plaster walls after, since they need to be leveled prior to further trim. For this purpose it is better to get the starting mixture: it is specially designed to handle the walls after plastering, and for addressing the significant height differences.

Also, when the primer after the plaster on the walls to dry, you can process them, or the surface of the universal finishing putty. recent, compared with the starting mixture, They have relatively poorer consumer characteristics, and are usually used in cases, When the plaster layer has no significant flaws.

On the base material fillers are divided into three categories:

More often, apply putty gypsum-based but use is limited to the scope of, they should not be applied in very wet areas where there is contact with water in the bathroom, basin. otherwise, Why putty plaster walls after, if, due to high humidity coating based on gypsum quickly will become worthless.

It is strictly prohibited to use gypsum plaster on the street as moisture and frost destroy mixture Rodband and other similar.

The shape of the sale fillings are presented in two categories:

In this way, the cheapest option - dry gypsum powder, however, it also has the lowest quality. Gypsum products are perfectly suited for, to plug the existing cracks in the walls. The most expensive are ready fillings based on polymers, These materials are best used for the manufacture of topcoat.

Often, before the start of plastering work, the question arises, have you pull beacons after plaster, or they can be left in the walls. It is recommended to make a mandatory. Material manufacturing beacons - metal, and if they leave, over time, they will be amazed by corrosion. it, in turn, reduce the strength of the plaster layer, and, in the end, lead to its crumbling. On the surface of the walls appear cracks and other damage.

After that, as the decision, whether it is necessary to choose the beacons after plaster, You can proceed to the starting putty surface. Apply lower, the coarsest material layer. With the starting mixtures for fillings and triturated holes Stroebe, eliminate large differences in elevation. The thickness of the starting layer may sometimes reach 15-20 mm.

Under a layer of putty can put the masking grid, stretching it across the treated surface of the wall. This will provide an opportunity to achieve a more level stowage material, improve the strength of the starting layer of putty.

When the starting coating dries, proceed to finishing, which is carried out using a finishing mixtures. Unlike home, it is applied very thinly, it is fully repeating the resulting relief walls. In some cases, the question arises, Do I need to putty the walls after plaster Rotband, the surface turned out perfectly flat. If you observe the technology, the need to apply extra finishing layer disappears, walls and aligned so obtained.

Preparing the walls for painting or papering

After the completion of plastering work should wait for the complete drying of walls, and only then to prepare them for painting or papering. Technology of performance of both types of finishing the same, the difference is only in the nuances in the selection of finishing materials. The choice of a suitable method of finish you can spend as much time, as dry walls after plaster - about a month.

So, after drying the wall primer for painting primed with applying special priming, sometimes - after pre-grinding. If you plan to implement Wallpapering, the, instead of primer, wall after drying can be covered with wallpaper paste. In this case, add more water to it, than usual. Besides, the adhesive must be recommended by the manufacturer for use as such, otherwise it is better to put on the walls of a standard mixture for priming.

Errors during priming and plastering work on the walls

Drawback is leaving metal lighthouses in plaster. They oxidize with time, which leads to cracking of the coating, even if it is carefully covered with primer. If due to corrosion lighthouses cracks on the wall after the plaster, then fix it with the help of additional spackling is almost impossible, because the cause of the problem remains.

Also, the appearance of cracks - a sign of haste in. Instead of doing plastering in several layers, make a single layer coating and rough. Under the influence of gravity to the base solution slide walls, begins to harden and crack. To avoid this, plaster walls should be carried out in several stages, can not be directly applied to a huge mass of material.

Getting priming and surface Shpatlevanie, We must take into account the drying walls after plastering. Premature start of work is a violation of technology, and will destroy the finish after drying. Fix this without re-repair is impossible.

If the wall is cracked after plaster and even change their geometry, this indicates a lack of professionalism of masters, who carried out plastering, without checking the correct application of the material. In the same time, if the wall has turned smooth on the first try, then it before painting or papering not even need puttying.