A common problem of the modern world is a cold and damp in the apartment during the winter. And the elimination of such problems might arise from excessive price to pay for heating. This indicates that, that for some reason, heat leaves the room, without stopping it. The solution of this problem becomes, of course, warming. But the familiar exterior is not always possible to perform, and consequently it is necessary to equip the insulation inside the walls. That's about it, we'll talk.

When can a warming

Wall insulation from the inside is a rare phenomenon in the apartment, since most of them leads to a rather disastrous results. First of all it is noted, that the wall when it gets warmer, and besides even begins to freeze more. This leads to the emergence of a number of problems still, about which we will talk later.

In particular, warming itself of this kind can be found in a few cases:

Also, in some cases, this type of wall insulation in the apartment can be a good option, if it had been planned in the construction of buildings, that is common in the Soviet buildings, as well as modern frame houses. With such insulation is supposed to strengthen existing insulation, It used with the same material, which was in operation during the construction. 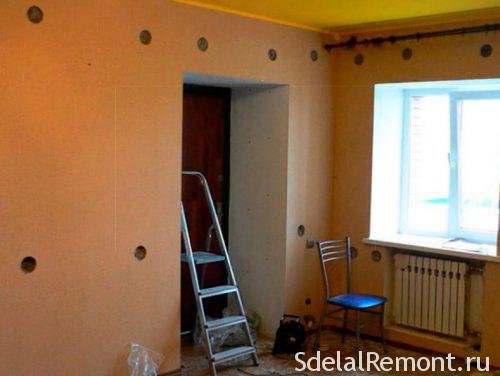 This is the main reason, which cause a wall insulation is inside the apartment. In other situations, it is simply inappropriate and argued. Spending is still better outer, because it is more effective, and even the need to change the exterior of the building should not be a barrier.

But if, though, the decision of the internal insulation should be fully grasp the technology of its holding, and carry out all activities responsibly, in full compliance with state standards and recommendations of experts.

Now, consideration should be given such a design features. And chief among them, and at the same time it becomes a major drawback, that the wall itself is not getting warmer, but on the contrary even more freezes. This causes displacement of the point of Russia.

Who does not know, it is sharpened, a little more specific. Any surface of the wall has pores, through which the moisture out of the room, inside the walls at this time passes condensation. point, and in which there is Condensation called point of Russia. 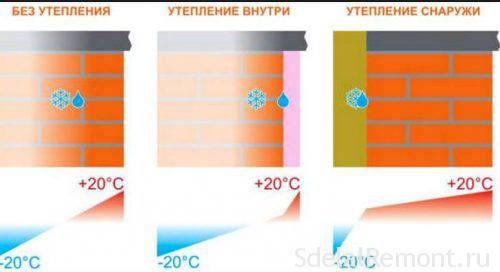 In consequence of this, if you do not find, how to eliminate dampness, heat loss will soon gain the same intensity, as in the case of non-insulated wall. In some cases, wall and at all can completely destroy, particularly if it is made of bricks.

How to protect the walls from moisture

As it has become clear, with such insulation dampness almost inevitably. Therefore it is necessary to consider the basic rules, to help cope with the problem, how to get rid of dampness, emerging as a result of freezing wall.

In this way, to eliminate the dampness in the wall is necessary to provide for the use of only vapor tight insulation. Hence the first, The worst mistake a lot of people, namely, insulation through the mineral wool with use of an additional vapor barrier layer (that in fact practically useless).

Besides, important factor is and the complete absence of seams or joints with insulation, as they also passed pairs, and even more, than the material itself. And also any joints - is the risk of penetration of condensate into the room. 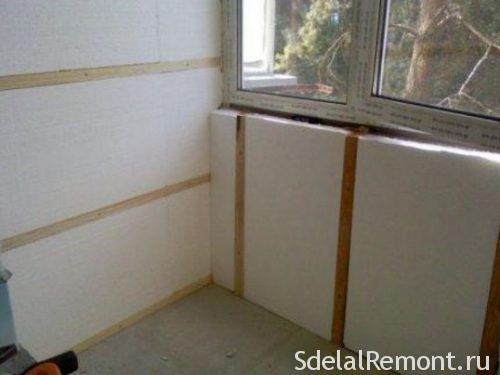 In this way, in deciding whether, how to get wet will help only a good, and most importantly the proper insulation and ventilation. Under good discharge and correct in this case is not strictly suitable:

The first two options can be used only as the last element of warming, no more. Again, any insulation, which runs vapor-permeable material is strictly not suitable.

In practice the best embodiment of the insulating walls inside a pre-fabricated house, is the use of polystyrene foam. Of course, with it too difficult to achieve maximum tightness, especially, without using additional solutions, but compared to other materials he wins. Also a good choice is penofol, about it, we also talk a little.

In this way, to get rid of dampness in the house, as it has become clear, you need to spend quality insulation. And then we will look at, how to do it, and that this need.

important points, the implementation of which is required to

To start, once considered the ways of warming apartments, for some reason it was chosen interior, necessary to determine the requirements for the surface before starting work:

By the way speaking, only one, which will fully comply with all requirements of the new wall will, built indoors. But it is not advisable, because in this case the floor area will be reduced by 3-5 m.

The choice of material for insulation

Internal wall insulation of apartment allows to apply (at least to produce the desired effect) all three options. More specifically,:

Consider the little details of each type of, and then focus on that, which is suitable for most.

Due to its unique structure it is also a good heat reflector. For example, when laying insulation thickness 10 cm, material is capable of heat preserver at times better, than the brick wall 5 times thicker.

Besides, material possesses a good level of protection against radiation, vapor permeability, as well as easy to install. 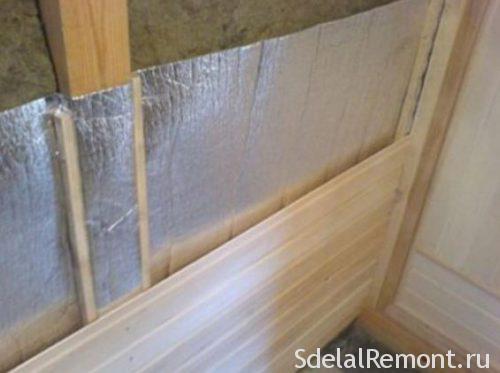 There are three types of material for the insulating walls inside penofolom, each of which has its own characteristics:

Another option becomes a double wall arrangement, which assumes a device on the surface of certain elements underfloor. This technology allows you to create a thermal barrier, therefore the moisture from the premises will not condense in the walls.

This technology is only used in the most severe frosts and turns on to heat the walls and the bias point of Russia in its center. 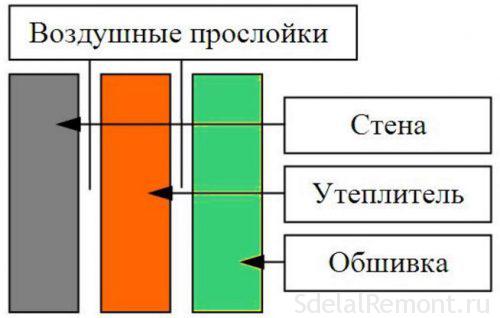 Everything for this type of insulation requires the construction of more walls of drywall or masonry in brick floor. Himself a heater mounted on the wall further from the inner side. Such an option is very good and saves the wall from destruction, but it is not economical, because it requires a large electric power consumption, since heating, actually, It requires room, a street.

If a, nevertheless it decided to hold the inside wall insulation polystyrene, which is not quite fully satisfies the requirements for internal insulation, it mainly focus on installing the necessary material.

The material itself is a sheet, with good density. The size of the standard 100*100. Accordingly spend laying without joints will not work. Thus, special attention should be paid to the fitting and sealing.

Besides, such a coating requires special mounting technology. Usually, at an external finishing material uses a special glue solution. When held inside wall insulation Penoplex this option will not work. When using the air chambers are formed solution, respectively, there is a good environment for the condensate. And over time, and there is access to the bathroom, which should not be allowed.

The only thing, that suit, This coating solution directly onto the sheet itself, wherein, obespetsenie maximum tight adhesion to the wall. Besides, necessary and additional alignment walls, as well as the reinforcement mesh.

It's time to consider, independently carry out wall insulation foam inside. The first step is accordingly calculated wall area, the required amount of material, etc..

But should take into account all aspects of the, that affect the installation conditions, as well as the possible time arrangement. For full compliance technology works, conduct insulation should only summer, at what, during the period, when there is no rainfall.

Also need to pre-dry the wall, which are used for heat guns or heater. It is necessary to reduce to a minimum the surface humidity.

And now for the technology:

In this insulation works completed. How view, there is nothing particularly difficult, you just need to follow the technology and succeed. Finally, we offer a few videos, which will help to understand the method of warming the example of its execution.