the main / All the repair / Walls / alignment walls. How to properly align the wall in the apartment with his hands

We have a previous article we talked about, how to implement the alignment of the ceiling apartments with their own hands, and now we try to describe more how to align walls. If you are still on the look of your house or apartment, then before how to prepare the wall for wallpapering or put the tiles correctly, You need to align the walls.

How to properly align the wall in the apartment with his hands?

First of all you must determine by what methods, you want to align the walls in his apartment, There are two ways. The first, this alignment of walls with plasterboard with a skeleton, and second frameless method with the use of building mixtures.

And decide for yourself what you will do with the wall after leveling. It is important, Tolley you align to, that would be pokleit wallpaper, or put a tile or simply paint. If you want pokleit wallpaper or just paint, then you can align the wall with the help of this option - plaster walls with his own hands. And if you want to lay tile, then you need to mix. So better to engage the tile surface.

Now we will explain how to align the wall with the help of building mixes quickly and independently. 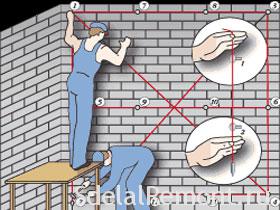 Beat in one of the upper corners of the nail wall, leave 2 – 3 mm on the surface. This will be the first beacon. Then take a thread and attach any weight on it, for example a nut. And got plummet. This plumb to secure the nail in such a way, that would load a little bit did not get to the floor. And wait until the plummet will freeze in place. That's got a direct line. Knock second nail in the bottom wall so, that would be a string and hat cloves were in line. Look at the picture on the left.

In the same way tamper with the opposite wall portion. Got 4 nail, driven into the perimeter, and two straight lines on both sides.

Now take another thread and pull it from the end of one of the lower or upper nail to the opposite end of another, crosswise. And look, that would thread, stretched diagonally, not in contact with the wall. Everything, with thread finished. Now, take a stick or a flat and lean it against the two nails on one side of the wall.

Dilute the mixture with a spatula and fill the space between the stick and the wall. and is expected. must dry up. Here you get a flat, straight line, it would Beacon. Check it with a mounting level. The same manipulations were carried out on the other side of the wall. It is not difficult. Dissolve 10 liters Rotband spatula and apply it on the wall large strokes.

After take and generally flat stick and align the deposited mixture. Movements up - down, or vice versa, along the lines of Beacon. If little Rotband - add another, until the wall does not take a flat surface. The angle can trim with a spatula. That's all, do it right. Good luck to you. Video on alignment of the walls.